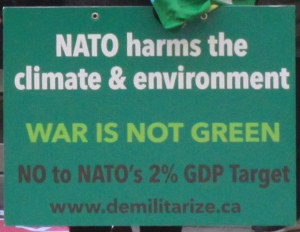 In the running are Boeing’s Super Hornet, SAAB’s Gripen and Lockheed Martin’s F-35 fifth-generation stealth fighter. Bids are due in July, the winner will be selected in 2022 and the first combat aircraft will be delivered by 2025.

To recover from the pandemic and reduce carbon emissions, the Canadian government should permanently cancel the fighter jet competition.

Many defence analysts expect that American weapons giant Lockheed Martin will be awarded the Canadian contract. This month, Canada paid $70 million to the U.S. military to remain a partner in the F-35 development consortium, bringing our total investment to over $540 million since 1997. Canada’s closest allies, the U.S., United Kingdom and Australia, have already bought this stealth fighter.

But even former deputy minister of national defence Charles Nixon has argued that Canada does not face any credible threat that requires fighter jets and that they are not necessary to protect the country’s populace or sovereignty.

What are the urgent threats we are facing? A protracted public health crisis and catastrophic climate change. To recover from the pandemic and reduce carbon emissions, the Canadian government should permanently cancel the fighter jet competition.

In response to widespread job losses from the COVID-19 lockdown, the federal government rolled out an emergency bailout that will cost tens of billions of dollars. This unexpected stimulus spending combined with the current recession will lead to many years of budgetary deficits, according to the Parliamentary Budget Officer.

Moreover, the PBO has repeatedly found that the Department of National Defence underestimates the costs of defence procurement. The current price tag of the fighter jet contract does not include the full life-cycle costs such as for operations, munitions and maintenance.

The average hourly cost to operate an F-35 is sky-high at about $40,000, which is close to the yearly salary of an essential worker such as a paramedic, nurse and long-term care worker.

New fighter jets will cause carbon lock-in by entrenching fossil fuel–based militarism for years to come.

Last year, the Costs of War Project at Brown University released a study on military fuel use and climate change. Among all branches of the military, air forces are the largest emitters of C02.

Fighter jets burn an exorbitant amount of specialized, toxic fuel called JP8, which allows them to fly at faster speeds and at higher altitudes than commercial aircraft can. The F-35 releases more carbon into the atmosphere in one long-range flight than a typical automobile does in a year.

The Canadian government purposefully ignores the pernicious climate impacts of its defence procurement. According to DND’s 2017 Defence Energy and Environmental Strategy report, the government has exempted all military operations and activities from national emission reduction targets.

New fighter jets will cause carbon lock-in by entrenching fossil fuel–based militarism for years to come. They will prevent Canada from decarbonizing and meeting its Paris Agreement commitments.

Fighter jets are for fighting, and that’s what needs to stop. Canada’s recent deployments of combat aircraft have been deadly and destructive. Over the past decade, Canadian fighter jets have bombed Afghanistan, Libya, Iraq and Syria, prolonging violent conflict and contributing to massive humanitarian and refugee crises.

In March, the United Nations secretary-general, Antonio Guterres, appealed to the international community to stop fighting.

“The fury of the virus illustrates the folly of war.… Silence the guns; stop the artillery; end the airstrikes,” he said, calling for a global ceasefire to deal with the pandemic.

Canada responded by saying it “fully supports” the ceasefire. If that’s the case, then instead of buying a new weapons system, the federal government should disarm and invest in a Green New Deal.

The coronavirus and the climate emergency remind us that we have common security challenges that require international cooperation and peace, not anachronistic air power and armed force. The federal government should ground its plans for new fighter jets.

Tamara Lorincz is a PhD candidate in the Balsillie School of International Affairs, Wilfrid Laurier University, and member of the Canadian Voice of Women for Peace. She is based in Waterloo, Ontario. 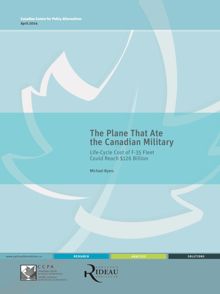 The F-35 is the largest weapons program in history. This multi-role aircraft is built by Lockheed Martin with Northrop Grumman and BAE Systems as major partners.

It should equip the armies of Australia, Canada, Denmark, the United States, Israel, Italy, Japan, Norway, the Netherlands, the United Kingdom and Turkey for the next 40 years and replace the F-16, F-18 and F-22.

However, its production started while essential aeronautical software has not yet been invented. The defense industries of buyer states were left out in favor of the USA, without knowing whether this system will be delivered or not.

Since the launch of the project, its cost has varied ceaselessly, leading to the cancellation of various orders. Earlier this month, the Government Accountability Office (GAO) released a reassuring study, however based on figures already two years old. Simultaneously, the Department of Defense assured it would be cheaper to buy but more expensive to maintain.

According to an independent Canadian study by Professor Michael Byers for the Canadian Centre for Policy Alternatives and the Rideau Institute, the truth is much darker: in truth, no one can know the exact cost of an aircraft that has not been precisely designed. However, the 65 aircraft ordered by Canada would likely cost a staggering $ 1.5 billion USD per aircraft over 40 years (in 2007, the United States assured that the aircraft would not cost more than the F-18 and estimated its cost at about 377 million dollars each).

The following bar graph illustrates the increase in the cost estimates for Canada’s fleet of 65 over the past years. 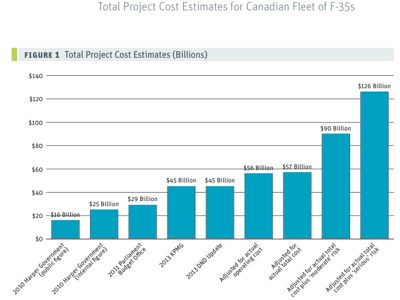