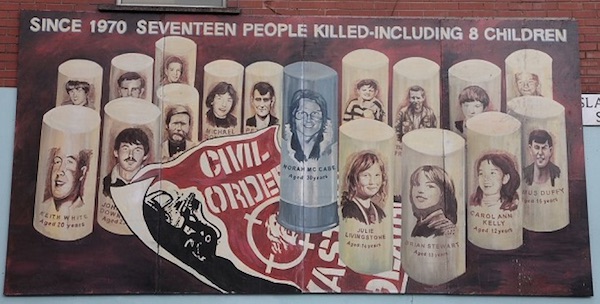 There has been a surge of pressure for an end to Britain’s trade in plastic and rubber bullets following disturbing scenes of serious injuries to Black Lives Matters protestors in the United States.

Seventeen people have been killed by rubber bullets over the course of the conflict in Ireland, including eight children, and there have been scores of other injuries, including blindness.

Originally designed to be suppress protests in Catholic areas, over 125,000 rubber and plastic bullets were fired between 1970 and 2005.

Official export licences show Britain is now the world’s largest exporter of rubber bullets, as well as other militarised policing equipment, such as smoke and pyrotechnic charges, CS gas grenades, and teargas.

Sinn Féin has supported calls by the Scottish parliament, opposition MPs at Westminster and human rights campaigners for an immediate suspension of the exports.

“As was demonstrated during the conflict here, rubber and plastic bullets are anything but ‘non-lethal’. There is no excuse or justification for their use ever.”

This week, English TV host Victoria Derbyshire added to the controversy when she said during a live broadcast to the US: “We don’t use rubber bullets in the UK, we don’t know what they are”.

Derbyshire was apparently unaware that they have been used by the RUC, PSNI and British Army to attack peaceful protests in the north of Ireland for decades. But her comments motivated two Derry activists, now living in London, to help campaign for an end to the industry.

“Victoria’s comment shows that even in the supposedly more informed elements of media there is a blind spot about the use of rubber bullets by British Forces within its own borders,” wrote Maev McDaid and Brian Christopher.

“This is just one more example of the failure and inability to discuss Britain’s bloody past and present.

“Increasingly we see people take to the streets to challenge the legacies of empire, such as the statutes in public spaces, forcing the hand of the media to address Britain’s imperial past.”

An Irish-American leader in Philadelphia said he could not overstate his opposition to the use of plastic bullets anywhere “let alone on our fellow citizens”.

Bob Gessler, the president of the Irish Memorial Ancient Order of Hibernians, said he was one of thousands who marched against their use in Ireland.

“The devastation these bullets have done to Irish Catholic families throughout Northern Ireland cannot be forgotten – fathers, mothers, daughters and sons killed, maimed and wounded,” he said.

“We as a people cannot forget and can never condone their use. We cannot forget our history as a persecuted people, nor sacrifice the very human rights we have sought for and still seek for our sisters and brothers in Northern Ireland.”

The petition calling for an end to the British export of rubber bullets is available at https://bit.ly/3e96Iyo

A petition to ban rubber bullets is available at https://bit.ly/37qqwuX