Signs of Change in Ireland

Citizen’s committees are removing or renaming British imperialist figures and institutions throughout the United Kingdom as part of taking a stand against British colonialism.

Streets surrounding Belfast City Hall including May Street and Donegall Square were renamed after three deceased Irish patriots, the hunger strikers – Joe McDonnell, Bobby Sands and Kieran Doherty – who heroically laid down their lives inside the H-blocks of Long Kesh internment camp in 1981 for the rights of political prisoners and the cause of Irish freedom. 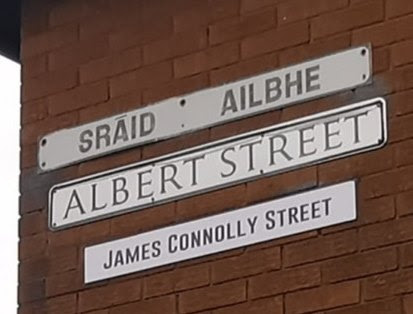 Another street honours James Connolly, the Communist leader at the centre of the 1916 Rising for independence.

Cromwell Road had been renamed after Henry Joy McCracken, a Presbyterian industrialist from Belfast and leader of the United Irishman rebellion of 1798.

Queen’s University was renamed “Mairead Farrell University Belfast” with signage erected across its prominent front gates. She was a former student and IRA volunteer, shot multiple times in the back although unarmed in Gibraltar on active service in 1988. [1]

The signs also serve as an important reminder of the ruthless brutality of the British government in Ireland under the leadership of then-prime minister Margaret Thatcher.

For years there has been sharp criticism of the way the colonial period is remembered in the Republic of Ireland. Some statues have been removed officially and others “unofficially”.

One such case was the statue of Horatio Nelson, built in the centre of what was then Sackville Street (later renamed O’Connell Street) in Dublin, Ireland. Erected in 1809 on top of a 134-high pillar when Ireland was forced to be part of the United Kingdom, it survived for more than 140 years until March 1966. It was frequently pointed out that a statue to the British admiral had no place in Dublin after Irish independence was achieved and signing of the Anglo Irish Treaty in 1921 which arbitrarily divided the island and the Irish people. After years of inconclusive discussion, the issue was dealt with when the statue was finally toppled with gelignite, as was that of a large statue of George II and his horse was brought to ground at Stephen’s Green in 1937. Nelson’s remnants were later destroyed by the Irish Army but its head is preserved in a museum.

The Statue of the British Admiral which had no place in Ireland toppled with gelignite in March 1966.

George II and his horse brought to the ground at Stephen’s Green in 1937.

Recently campaigns have been underway in Ireland, like that in Cork, to remove the name Queen Victoria, known as the “Famine Queen”, from street signs. That her main statue at Leinster House in Dublin survived until 1948 (26 years after the creation of the Free State) is something of a miracle. She was monarch when Ireland was beset by a famine organized by rich English and Irish landowners and millions starved or emigrated. After gathering dust in Ireland for some years, Victoria got a trip to Sydney, Australia to be “planted” outside the Queen Victoria Building, despite some bids from Canadian buyers. Writing in the Irish Times, Myles na gCopaleen (Brian O’Nolan/Flann O’Brien) the following month was not overly bothered with its removal – her statutes were more harmful than her statues, as he put it. “Besides, look at it this way,” he wrote. “Time has given the mere Irish their revenge. The fact is that Victoria has turned green. Of hue she approaches our decent Irish letterbox. And it is the price of her.”

That incident sparked renewed calls in Ireland for a statue of Cromwell that sits outside the UK Houses of Parliament in London to be taken down.

A statue of Oliver Cromwell has been graffitied in Manchester with the words “Cromwell is a cockroach” and “Irish invasion”. Cromwell served as Lord Protector of the Commonwealth of England, Scotland, and Ireland during the 1600s.  He infamously enacted a series of brutal military dictates that led to the deaths of countless innocent Irish civilians including at least 2,000 people in Wexford during the British invasion he commanded. Estimates vary between 80,000 and 130,000 regarding the numbers of Irish that the British colonialists sent into slavery in America and the West Indies during the years of 1651-1660.

Interestingly, residents of Cromwell, England marched in solidarity with the African-American people following the brutal murder of George Floyd.

In Belfast, Lasair Dhearg spokesperson Pól Torbóid said that they had “compiled a list of place names from across the city” that they say featured “prominent individuals responsible for historic abuses in Ireland”.

He added: “Belfast’s streets, littered with the poverty of its people, its homeless and jobless; are also littered with the names of those whose attitude to Ireland was one of subjugation, and who, by force of arms, forced a political and economic system upon our people, which became the foundation for partition, and for the current economic struggles faced by the Irish people.

“These street names, monuments to those who delivered misery across our nation in one form or another, also serve as monuments to the political and economic system that they helped to build in Ireland.

“They must be replaced with the names of heroes: of normal people. Not lords. Not kings or queens; but rather those who weren’t the heirs to vast riches.

“Those whose only inheritance was that which they tried to carve out of a political system that railed against them.

“It is our inheritance as Republicans to end the oppression immortalised in these street names and statues.

“It is our duty to end colonialism, to end the normalisation of imperialism and, consequently, the political and economic system that maintains it.”

1.Full list of street names in Belfast and what they’ve been changed to:

Originally published in TML Weekly on June 30 and Workers’ Weekly (Britain) on July 4, and revised and expanded by the author.

One response to “Signs of Change in Ireland”