(July 20) – The Guardian carried a very strange piece yesterday under the heading “Stamps celebrating Ukrainian resistance in pictures”. This was the first image shown: 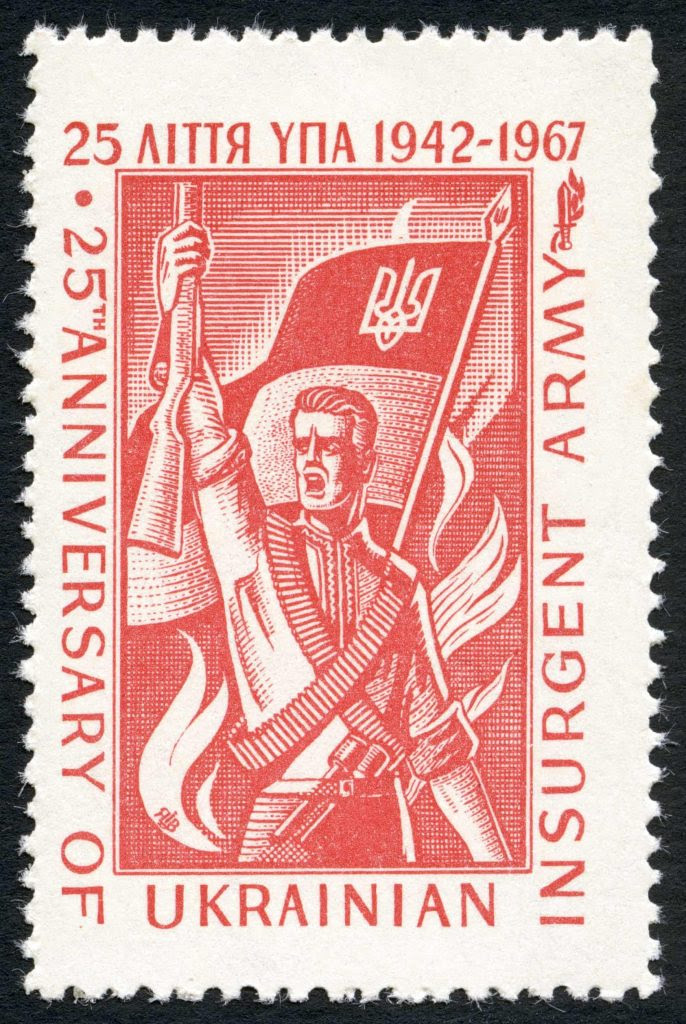 The Ukrainian Insurgent Army (UPA) was, without any shadow of a doubt, responsible for the slaughter of at least 200,000 Polish civilians; they liquidated whole Polish communities in Volhynia and Galicia, including the women and children. The current Polish government, which is as anti-Russian and pro-NATO as they come, nevertheless has declared this a genocide. It certainly was an extremely brutal ethnic cleansing. There is no doubt either that at times between 1942 and 1944 the UPA collaborated with the Nazis and collaborated in the destruction of Jews and Gypsies. It is simplistic to describe the UPA as fascist or an extension of the Nazi regime; at times they fought the Nazis, though they collaborated more often. There is a real sense in which they operated at the level of medieval peasants, simply seizing local opportunities to exterminate rural populations and seize their land and assets, be they Polish, Jew or Gypsy. But on balance any reasonable person would have to include that the UPA was an utterly deplorable phenomenon. To publish a celebration of it, disguised as a graphic art piece, without any of this context, is no more defensible than a display of Nazi art with no context.

In fact the Guardian’s very brief text is still worse than no context.

Artists and exiles around the world would use stamps to communicate the horrors of Soviet oppression. “These stamps show us the ideas and values of these people, who they really were and what they were fighting for,” Kosmach says.

That is so misleadingly partial as a description of the art glorifying the UPA movement as to be deeply reprehensible. It does however fit with the anything goes stoking of Russophobia, which is the mainstay of government and media discourse at the moment. Even at the height of the Cold War, we never saw such a barrage of unprovable accusations leveled at Russia through the media by “security service sources”.

A whole slew of these were rehearsed by Andrew Marr on his flagship BBC1 morning show. The latest is the accusation that Russia is responsible for a cyber attack on Covid-19 vaccination research. This is another totally evidence free accusation. But it misses the point anyway. The alleged cyber attack, if it happened, was a hack not an attack – the allegation is that there was an effort to obtain the results of research, not to disrupt research. It is appalling that the UK is trying to keep its research results secret rather than share them freely with the world scientific community. As I have reported before, the UK and the USA have been preventing the WHO from implementing a common research and common vaccine solution for Covid-19, insisting instead on a profit driven approach to benefit the big pharmaceutical companies (and disadvantage the global poor).

What makes the accusation that Russia tried to hack the research even more dubious is the fact that Russia had just bought the very research specified. You don’t steal things you already own.

If anybody had indeed hacked the research, we all know it is impossible to trace with certainty the whereabouts of hackers. My VPN’s are habitually set to India, Australia or South Africa depending on where I am trying to watch the cricket, dodging broadcasting restrictions. More pertinently, Wikileaks Vault 7 release of CIA material showed the specific programmes for the CIA in how to leave clues to make a leak look like it came from Russia. This irrefutable evidence that the CIA do computer hacks with apparent Russian “fingerprints” deliberately left, like little bits of Cyrillic script, is an absolutely classic example of a fact that everybody working in the mainstream media knows to be true, but which they all contrive never to mention.

Thus when last week’s “Russian hacking” story was briefed by the security services, that Jeremy Corbyn deployed secret documents on UK/US trade talks which had been posted on Reddit, after being stolen by an evil Russian who left his name of Grigor in his Reddit handle, there was no questioning in the media of this narrative. Instead, we had another round of McCarthyite witch-hunt aimed at the rather tired looking Jeremy Corbyn.

Personally, if the Russians had been responsible for revealing that the Tories are prepared to open up the NHS “market” to big American companies, including ending or raising caps on pharmaceutical prices, I should be very grateful to the Russians for telling us. Just as the world would owe the Russians a favour if it were indeed them who leaked just how systematically the DNC rigged the 2016 primaries against Bernie Sanders. But as it happens, it was not the Russians. The latter case was a leak by a disgusted insider, and I very much suspect the NHS US trade deal link was also from a disgusted insider.

When governments do appalling things, very often somebody manages to blow the whistle.

If you can delay even the most startling truth for several years, it loses much of its political bite. If you can announce it during a health crisis, it loses still more. The world therefore did not shudder to a halt when the CEO of Crowdstrike admitted there had never been any evidence of a Russian hack of the DNC servers.

You will recall the near incredible fact that, even through the Mueller investigation, the FBI never inspected the DNC servers themselves but simply relied on a technical report from Crowdstrike, the Clinton related IT security consultant for the DNC. And now know for sure that Crowdstrike had been peddling fake news for Hillary. In fact Crowdstrike had no record of any internet hack at all. There was no evidence of the email material being exported over the internet. What they claimed did exist was evidence that the files had been organised preparatory to export.

Remember the entire “Russian hacking” story was based ONLY on Crowdstrike’s say so. There is literally no other evidence of Russian involvement in the DNC emails, which is unsurprising as I have been telling you for four years from my own direct sources that Russia was not involved. Yet finally declassified Congressional testimony revealed that Shawn Henry stated on oath that “we did not have concrete evidence” and “There’s circumstantial evidence , but no evidence they were actually exfiltrated.”

This testimony fits with what I was told by Bill Binney, former Technical Director of the National Security Agency (NSA), who told me that it was impossible that any large amount of data should be moved across the internet from the USA, without the NSA both seeing it happen in real time and recording it. If there really had been a Russian hack, the NSA would have been able to give the time of it to a millisecond. That the NSA did not have that information was proof the transfer had never happened, according to Binney. What had happened, Binney deduced, was that the files had been downloaded locally, probably to a thumb drive.

So arguably the biggest news story of the past four years, the claim that Putin effectively interfered to have Trump elected, turns out indeed to be utterly baseless. Has the mainstream media, acting on security service behest, done anything to row back from the false impression it created? No it has doubled down.

The “Russian hacking” theme keeps being brought back related to whatever is the big story of the day.

Then we have those continual security service briefings. Two weeks ago we had unnamed security service sources telling the New York Times that Russia had offered the Taliban a bounty for killing American soldiers. This information had allegedly come from interrogation of captured Taliban in Afghanistan, which would almost certainly mean was obtained under torture.

It is a wildly improbable tale. The Afghans have never needed that kind of incentivisation to kill foreign invaders on their soil. It is also a fascinating throwback of an accusation – the British did indeed offer Afghans money for, quite literally, the heads of Afghan resistance leaders during the first Afghan War in 1841, as I detail in my book Sikunder Burnes.

You do not have to look back that far to realise the gross hypocrisy of the accusation. In the 1980’s the West was quite openly paying, arming and training the Taliban – including Osama Bin Laden – to kill Russian and other Soviet conscripts in their thousands. That is just one example of the hypocrisy. The US and UK security services both cultivate and bribe senior political and other figures abroad in order to influence policy all of the time. We work to manipulate the result of elections – I have done it personally in my role as a UK diplomat. A great deal of the behaviour over which western governments and media are creating this new McCarthyite anti-Russian witch hunt, is standard diplomatic practice.

My own view is that there are malign Russian forces attempting to act on government in the UK and the USA, but they are not nearly as powerful as the malign British and American forces acting on their own governments. The truth is that the world is under the increasing control of a global elite of billionaires, to whom nationality is irrelevant and national governments are tools to be manipulated. Russia is not attempting to buy corrupt political influence on behalf of the Russian people, who are decent folk every bit as exploited by the ultra wealthy as you or I. Russian billionaires are, just like billionaires everywhere, attempting to game global political, commercial and social structures in their personal interest.

The other extreme point of hypocrisy lies in human rights. So many western media commentators are suddenly interested in China and the Uighurs or in restrictions on the LBGT community in Russia, yet turn a completely blind eye to the abuse in western “allies” such as Saudi Arabia and Bahrain. As somebody who was campaigning about the human rights of both the Uighurs and of gay people in Russia a good decade before it became fashionable, I am disgusted by how the term “human rights” has become weaponised for deployment only against those countries designated as enemy by the western elite.

Finally, do not forget that there is a massive armaments industry and a massive security industry all dependent on having an “enemy”. Powerful people make money from this Russophobia. Expect much more of it. There is money in a Cold War.

*Craig Murray is a former British diplomat, historian and Scottish nationalist. His blog may be read here.