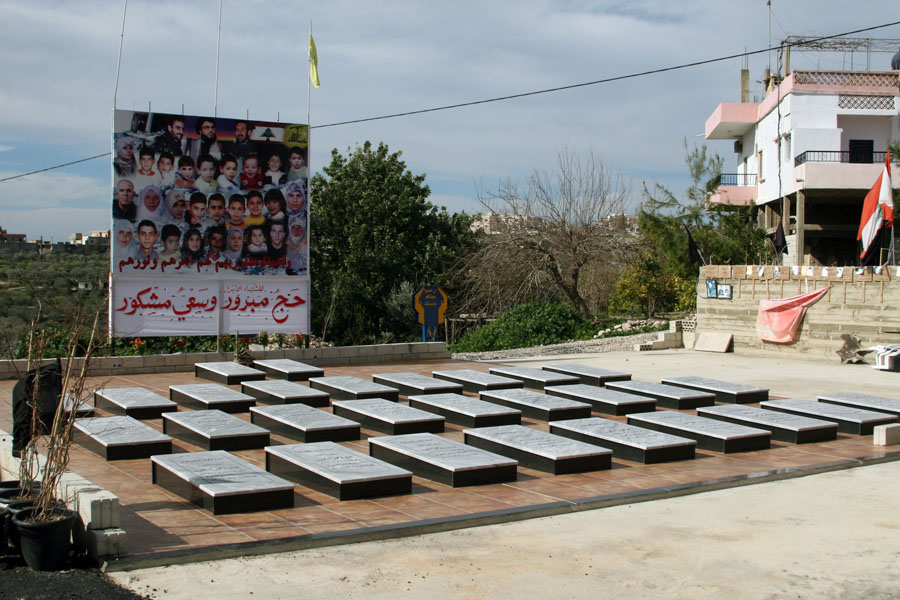 Graves of Lebanese civilians massacred by Israeli airstrikes on Qana on July 29, 2006 | Feyrouz

It is not acceptable that Canada which has troops and special forces stationed in Lebanon, Iraq and Israel is offering statements of regret and sympathy for the victims while making aid conditional on Lebanon making “reforms” dictated by the big powers. Given its hostility to Lebanon and how it has militarized aid to the Caribbean in the name of hurricane or earthquake relief such as Haiti, or arms to Saudi Arabia to attack the Yemeni people despite the endemic cholera, we need to be vigilant.

The Canadian people include significant communities of Lebanese origin including my home province of Nova Scotia. We have shared weal and woe in support of their 100-year struggle against French colonial and Israeli-U.S. aggression. Successive Canadian governments have consistently opposed this heroic struggle and actively contributed to aggression, exploitation and division of that country including occupation.

Lebanon has been suffering one of its worst economic crisis in centuries. Until today Canadian and NATO governments, media, and pundits have deliberately turned a blind eye to the suffering. It is suspect that the Globe and Mail is now giving over reams of pages to blame the government and people of Lebanon for the blast and carnage in the sea port of Beirut of August 4. Meanwhile any mention of horrific disasters that have taken place in Canada or the 75th anniversary of Hiroshima and Nagasaki, that great war crime carried out by the United States with the collusion of Canada, is completely blacked out by this media. This is important to note, because it means that two different standards are being applied, albeit a typical one under the Liberals and the values they espouse which divide the the peoples into good and bad people on a self-serving basis.

One example is little known. Universally, governments condemned the attacks that took place in the northern suburb of Saint-Denis in Paris on November 13, 2015. “Unquestionably, the murder and mayhem that happened in the French capital was despicable and tragic. Putting up French flags and showing solidarity for the people of Paris immersed vast stretches of the international public. The Paris attacks came one day after the attacks on Beirut’s southern Dahiyeh area on November 12, 2014. The murder and mayhem in Beirut virtually went unnoticed in North America and the European Union. The victims of the terrorism in Beirut were disregarded and went unseen, because the people that were murdered in Beirut were an accumulation of Lebanese citizenry, Arab identity, Muslim faith, Shiite confession, the working class, and people that lived in a spatial entity known to back Hezbollah. The civilian victims in Beirut were essentially condemned to being lower on the hierarchical totem pole of humanity than their counterparts in Paris. A subtle discourse tacitly implied that what happened in Beirut was not a tragedy and that the Lebanese people were less deserving of global sympathy than the French people.” [1]

Historical experience merits attention. Many examples can be given of the collusion of the Canadian government with the Anglo-American and French powers and Israel against Lebanon but let us remember Qana.

In September 2016, Canadian prime minister Justin Trudeau highlighted the depravity of his government by participating in the funeral of Simon Peres in Israel whom he eulogized as a “man of peace” and a “statesman.” Peres was hailed by the Liberals and Conservatives alike as “a friend of Canada.”

Peres was a mass murderer. In 1996 Peres was the architect of the massacre of civilians in Qana in Operation Grapes of Wrath (the Israeli name for the assault) and in all the refugee camps and villages of Lebanon. In October 2016 I wrote in response:

It is not that the Trudeau Liberals and other NATO governments and the media who are ignoring the war crimes of Shimon Peres do not know about his war crimes. The suggestion of this idea is disinformation. They know but their racist outlook and pursuit of empire-building prevent them from remembering the victims, for example, of the Qana massacre of 106 civilians, mainly women and children, in a UN shelter and indicting war crimes. War criminals and those who collude in crimes against humanity and the peace do not indict themselves nor mourn the victims.

What the Israelis did at Qana under Peres’ orders, which the UN itself confirmed, and how they then lied and attempted to deceive the entire world, is one gruesome example of how the Israelis have killed tens of thousands of civilians since the first Arab-Israeli war in 1948, of its U.S. patron’s commitment to cause death and destruction, and the modus operandi of what we see being unleashed in Aleppo against the Syrian people and nation today or in Gaza against the Palestinians.

Lebanese civilians were intentionally targeted and U.S. bombs were dropped on the innocent with absolute precision. According to the official Israeli Air Force website (in Hebrew, not English), the operation involved “massive bombing of the Shia villages in South Lebanon in order to cause a flow of civilians north, toward Beirut, thus applying pressure on Syria and Lebanon to restrain Hezbollah.” Nothing was left standing, not a single brick, let alone the UN flag that was supposedly protecting the unfortunate inhabitants of the shelter. UN officials and employees also died in the attack. Despite its own reports documenting the responsibility of Israel, the UN uttered not a word of opposition, because the U.S. veto blocked UN official condemnation of the barbaric act. 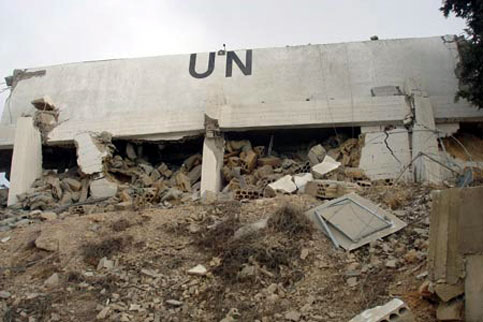 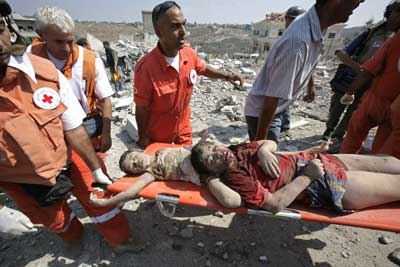 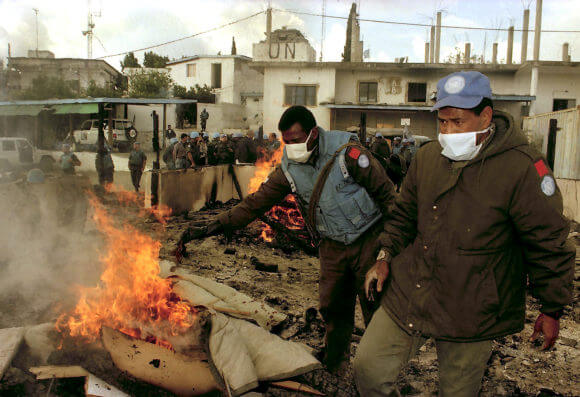 UN peacekeepers sanitize the site where civilians were killed by Israeli artillery while seeking refuge at the headquarters of the Fijian battalion of the UN Interim Force in Lebanon (UNIFIL), Qana, South Lebanon on April 18, 1996 | Hassan Siklawi/UN Photo

Chadia Bitar protesting a 2003 visit by Shimon Peres in Dearborn, Michigan, to receive the John P. Wallach Peacemaker Award. Bitar’s two young sons were among 106 civilians killed by Israeli bombs in Qana, Lebanon, in 1996. Peres was prime minister at the time of the bombing.

Qana was not an exceptional crime overseen by Peres, nor can Hezbollah be cited as the justification. Peres was the Minister of Defence in Yitzhak Rabin’s first government in 1974. Under Peres, Israel shifted the alleged justification for mercilessly slaughtering from the air Palestinian and Lebanese non-combatants from “retaliation” to “prevention,” developing the theories of “retaliatory” or “pre-emptive” strikes against civilian Palestinian and Lebanese targets.[1] Under Peres, the air force began mercilessly bombing on a daily basis scores of villages in Southern Lebanon – as well as Syrian cities and ports (Latakiya, Tartus and Baniysa) – before the region was occupied and annexed in 1978 by 30,000 Israeli troops, displacing over 250,000 people, in pursuit of the expansion of Eretz Israel (“Greater Israel”). [2]

This entire rendition must be questioned. Canadians reject and despise such “friends” with the contempt they deserve. Genuine friendship in international relations must be based on principle. Lack of modern principles and absence of an international rule of law serve wanton aggression, pre-emptive wars and empire-building.

On July 29, 2006, during the 4th Zionist war of aggression against Lebanon and ten years after that first horrible massacre, U.S. 500 lb, precision guided bombs once again rained down over the town of Qana, launched from U.S. airplanes, flown by Israeli pilots and fired with absolute precision. Fifty four villagers were killed in a single strike. Victims of the second massacre included a Canadian UN peacekeeper, Maj. Paeta Hess-von Kruedener, one of four unarmed UN military observers killed in the bunker of a UN building. [2] Two weeks before, several Canadians of Lebanese origin had been killed on July 16 in the indiscriminate bombardment. [3]

A general view of devastated Qana in July, 2006 | MaanImages/Raoul Kramer 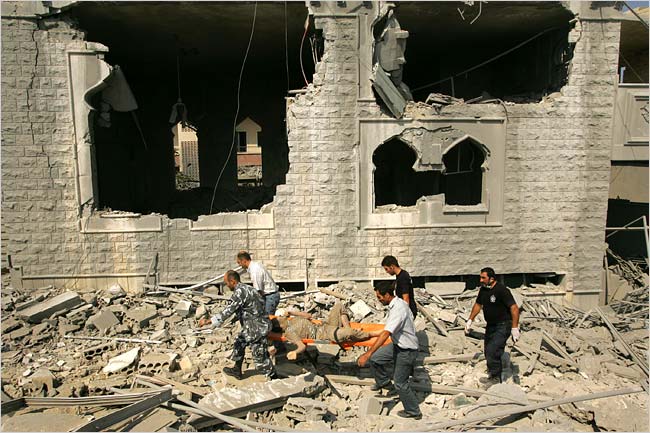 Then Canadian Prime Minister Stephen Harper and others appeared before the cameras to hail the Israelis for their “measured,” “proportionate” and “defensive response.”

Liberal leadership candidate Michael Ignatieff initially said that he was “not losing sleep” over Israel’s Qana attack, but later suggested that Israel had committed a “war crime”  Two years later, he revised his position again to say that his use of the term war crime was “the most painful experience of my short political career, and it was an error.”

One of the most revealing aspects of this stand, however, is that it was totally logical, considering that the aircraft and the bombs came from the U.S. and the pilots had been trained in Canada. In May-June 2005, Israeli pilots with ten F-16s trained in a U.S. exercise hosted by the Canadian Department of Defence and the Liberal Defence Minister Bill Graham code-named Exercise Maple Flag 2005 in Cold Lake in northern Alberta, for the first time in 38 meetings of the Maple Flag war games. Not only was the IAF invited, but Canada asked (and Israel obliged) the IAF to stay an additional two weeks in Cold Lake. (Qatar and the United Arab Emirates also sent “observers.”) Just five months later, the F-16s found their first target: the Al-Arqam elementary school in Gaza City in October, 2005. In Gaza, an Israeli military spokesman justified to Canadian journalist Jon Elmer the massacre at the Al-Arqam elementary school because “it was bringing up the next generation of Hamas members.” In southern Lebanon, they repeated, one after the other, there were Lebanese fighters resisting the Zionist occupation and aggression. Combatants whom Washington, Ottawa and its submissive “media” like to label as “terrorists” – a designation that gives them carte blanche to go in and bomb an entire population without the slightest deliberation.

It brings the Canadian government no honour to portray a man such as Shimon Peres as someone to emulate or as a model of statecraft.

The people of the world owe the people of Palestine and the Levant an enormous debt for their courage and determination to resist the most destructive empire the world has ever seen. An ancient people are bravely resisting annexation and defending their sovereign homeland against the U.S. and Zionist murderers. The peoples’ guiding principle is sovereignty and the right to decide their own affairs free from military dictate and occupation of the U.S. Empire.

The Trudeau Liberals mourned the loss of this velvet glove Peres who was, “above all, a man of peace,” because they too have donned the glove of “peacemaking” to camouflage and justify Canada’s unprecedented military expansion in the Middle East now underway. Trudeau serves as the velvet glove covering the iron fist of neo-liberalism and war of the U.S. imperialists. [2]

Shame on the political parties which are in total denial of the ongoing racist killings of the Palestinians, the brutal denial of the right of return, the targeting and entrapment of Muslims, attacks on immigrant workers, pay-the-rich policies, massive war preparations and history itself.

Few deny that the 2006 war put an end for eternity to the largest strategic component in the arsenal of  Israel backed by the United States: the power to intimidate and to sow the illusion of fearlessness on their own side.

1. “Tale of two cities – Why silence when Beirut gets bombed but tears for Paris?,” Mahdi Darius Nazemroaya, Strategic Culture. November 15, 2015.

2.”Harper decided to cover it up as it was too embarrassing; Israel would not cooperate with the investigation of why this happened.”

3. “Lebanon terror hits home,” read a Toronto Star headline on the topic for July 17, 2006; “Canadians were killed in crossfire of fight with Hezbollah,“ read another headline, this one from the July 18 issue of the Globe and Mail. In much of the coverage, it was as if Canadians of Lebanese origin were fleeing a natural disaster, not a campaign of collective punishment fully condoned by the Canadian government.

With a file from As`ad AbuKhalil, Consortiumnews