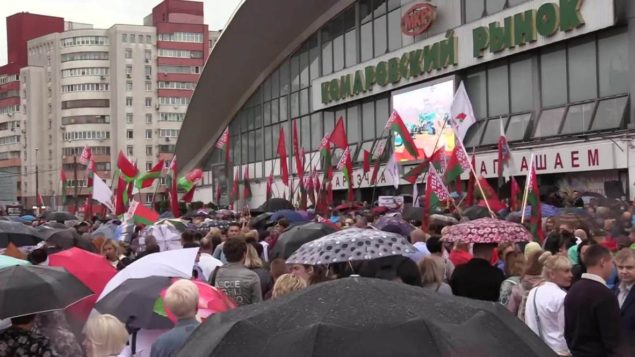 In August, the situation in Belarus and the mass protests that engulfed the country almost completely dominated the information agenda of the Ukrainian media.

On August 9, presidential elections were held in neighbouring Belarus. According to the Belarusian CEC [Central Electoral Committee], it was won by the incumbent President Alexander Lukashenko, who has ruled the country since 1994. The opposition did not recognize the election results, calling on its supporters to protest in the streets, acting according to the scenario of “Colour Revolutions.”

During the dispersal of the protests, at the beginning the police actively used violence. The violence later triggered protests from a number of workers’ collectives, since many workers. Despite not participating in the initial protests, they “appeared in the wrong place” and the police beat them too.

It is noteworthy that the opposition called for strikes only in state enterprises (the overwhelming majority in Belarus), never calling on workers of private or foreign enterprises to strike. Only a week after the elections, similarly massive rallies and demonstrations, in support of the incumbent president, began to congregate in Belarus, in which the Communist Party of Belarus, which supports the incumbent president, took an active part.

Many commentators compare the protests in Belarus and the 2014 Ukrainian coup in Euromaidan. There are indeed many common features, but there are also significant differences. Lukashenko pursued a fairly balanced social policy. In Belarus, most large enterprises have been nationalized (state-owned). There are no oligarchs in Belarus, and, accordingly, no large media owned by oligarchs, like those which summoned Ukrainians to Euromaidan in 2014. The standard of living and social guarantees in Belarus are much higher than in Ukraine, while tariffs for gas and electricity are some 50% lower. Food prices are also significantly lower.

According to recent polls, Ukrainians consider Alexander Lukashenko the best among foreign leaders[1]. It is because of this trust that Minsk was chosen as a platform for negotiations to resolve the conflict in Donbas.

Impact of Belarus events on Ukraine

The events in Belarus have divided Ukrainian society and caused serious concerns. Euromaidan supporters, radical nationalists and activists of Western NGOs support the Belarusian protesters. Pavel Klimkin, the Former Ukrainian Foreign Minister, said that the outcome of the protests in Belarus is a matter of Ukraine’s survival. He wrote, “The elections in Belarus will neither be a logical end, nor the end at all. All the fun will begin after them. We need to fight for European Belarus, we cannot and should not lose this fight, it is a matter of our security and our existence.”[2]

Ukrainian radical nationalists and neo-Nazis rushed to Belarus to help carry out some kind of Euromaidan in the country. According to the concept promoted by the Ukrainian ultra-right: Poland, Ukraine, Latvia, Lithuania, Estonia and Belarus should be united in an anti-Russian confederation, and it should become a kind of fortress of the “white race” opposing both “Asian Russia” and Western Europe, “spoiled by migrants.” Ukrainian neo-Nazis from the C-14 group support Belarusian protesters with flags used by both the modern Belarus opposition and Nazi collaborators during the Second World War[3].

“They were preparing this mess for us”

A similar concept is being promoted by so-called experts from the Atlantic Council, only citing the need to create a buffer zone between Europe and Russia. The real goal is, most likely, the decline in trade relations between Russia/China and Western Europe[4]. Until now, Belarus has been the missing link in this chain.

President Lukashenko says that the opposition is ruled from Poland and Europeans are just following the lead of the US:

“They were preparing this mess for us. And Russia was afraid of losing us. The West decided to pull us up somehow, of course—as we see now—against Russia. Now they want to establish this Baltic-Black Sea corridor, a sort of buffer zone: the three Baltic republics, us and Ukraine. We are one link in this chain. The USA is planning and directing all this, and the Europeans are playing along. It has been ordered – they’ll do it. A special centre was established near Warsaw. We are watching, we know what it does. They began to brandish their arms. You know, when disturbing things happen in the vicinity and tanks begin to move and planes fly nearby – this is not a coincidence.”[5]

There again, at the same time, President Zelensky and official Kiev are in no hurry to take one side or the other; they are prepared to wait. And one of the reasons for this is the importance of Belarus for the economy of Ukraine and all of Eastern Europe.

The significance of the ‘Belarus window’

After the imposition of sanctions against the Russian Federation, the Ukrainian economy has become highly dependent on the “Belarusian window,” through which Russian goods are supplied to Ukraine and Ukrainian ones – to Russia. For years Belarus has profited from re-labeling goods as ‘produced in Belarus’. It became the main supplier of sea food to all post-Soviet countries without a coastline. It supplies two times more fruit to Russia than it is able to produce. It is possible to buy Russian goods in every Ukrainian supermarket; they are simply marked, made in Belarus.

After Russia, Ukraine ranks second on the list of main recipients of Belarusian exports, totalling at around $4 billion. On the list of Belarus’ main importers, Ukraine is in fourth place (a total volume of $1.5 billion).

Ukrainian financial analyst Vasyl Nevmerzhitskiy said he believes that in the event of border closure by Belarus (in case of serious political problems) it will negatively impact the Ukrainian budget, as it would lose a major source of supplies: “If they go [as far as] the closure of borders in Belarus because of public unrest,” he said, “then our trade turnover will severely decrease. After all, through this neighbour Ukraine buys not only Belarusian goods, but also Russian ones. The supply of goods will be curtailed at once, to two key trading partners. This will be felt by the Ukrainian budget, since the collection of VAT and customs duties, as well as our currency market, will decrease.”[6]

However, the cornerstone of Ukrainian-Belarusian economic relations is oil and petroleum by-products. Although Belarus is not an oil-producing country, it is the main source of oil and diesel fuel for the Ukrainian market. About 35 per cent of gasoline is supplied to Ukraine by Belarus and about the same amount by the Russian Federation via Belarus. Oil is imported mainly from the Mozyr oil refinery in Belarus through Korosten, in the Zhytomyr region of Ukraine. As Ukrainian analysts have said since 2014, not a single Ukrainian tank would move without oil supplied by Belarus.

Moreover, since Ukraine’s industry has largely collapsed, Kiev also now repairs its military vehicles and aircrafts in Belarus. Minsk has become a middleman, working on military contracts for Russia as well as Ukraine (often in the same factories). In the meantime, Belarus supplies military vehicles and optic devices for both the Russian and Ukrainian armies.

Since Ukraine banned flights to Russia, despite millions of its citizens working there, Ukrainians must fly to Russia via Belarus. Likewise, Russians visit their relatives in Ukraine by flying via Belarus.

Thus, in supporting the protesters in Belarus, the Ukraine authorities would be acting against their own economic interests. Nevertheless, under the pressure of the United States, they will sooner or later have to decide which stand point to adopt. Ukrainian nationalists and activists of Western-funded NGOs have already made up their minds, but their actions in support of the Belarusian opposition in Kiev are gathering no more than a dozen people. Already having experienced two Color Revolutions and a period of state repression, the Ukrainian Left is calling for the focus to be on economic rather than political issues during the Belarusian crisis. It is this question that the Belarusian opposition is trying to silence, claiming that it is first necessary to overthrow Lukashenko, and then – “we’ll see.” At the same time, the opposition economic program, published in June on the website zabelarus.com, suggests neoliberal reforms and mass privatization[7].

The Ukrainian Marxist organization, Borotba, which was banned in Ukraine after the Colour Revolution in 2014, warns that the economic program of the Belarus opposition is against workers’ interests, although the opposition is trying to manipulate with them, for its own interests.

“The picture of the confrontation between the “people” and the “dictator” imposed by the imperialist media should not overshadow a political and class analysis. Sympathy for the victims of police brutality does not mean supporting their political agenda.

Borotba continues, “The leading force in the protests against the Lukashenko regime was the urban middle class, which has grown and strengthened during the years of relative economic prosperity. The middle class considered the framework of the paternalistic welfare state to be restrictive, seeing its ideal in the “free market” and “free enterprise.” Having no experience of the neoliberal reforms that have destroyed the economies of Ukraine and Russia, a significant part of the Belarusian people sees the future of their country in market-driven “freedom.”

“Nevertheless, a neoliberal program of large-scale privatization, health cuts and the freedom to lay off workers is unlikely to appeal to most workers. That is why the “reform” program, initially widely advertised by opposition candidate Svetlana Tikhanovskaya and her supporters, was later basically hidden. But it was too late,” Borotba concluded.[8]

What is obvious to Ukrainians who closely follow the events in the neighbouring country, regardless of the protests’ outcome Belarus will not be the same as it was prior to August 2020. If Lukashenko remains in power, his position will be weaker and he will have to make significant concessions to foreign trade partners. Any change of power in Belarus may be at the risk of a long period of instability, the closure of big enterprises and civil conflict, since the liberal opposition cannot rely on mass support, or prove its legitimacy.

**Dmitriy Kovalevich is a professional journalist in Ukraine, and an analyst and good adviser for this blog. He writes for New Cold War in which this article first appeared.