This day. Day of indigenous rebellion for their land and nature 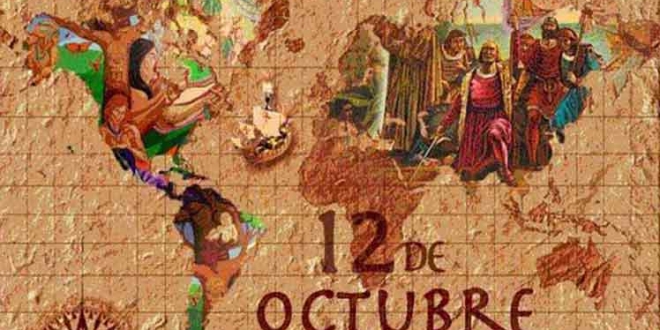 Havana (Prensa Latina) More than 500 years after the controversial discovery of the so-called New World, descendants of the original peoples of the American continent maintain their sense of rebellion, in defence of their land and nature.

The arrival of the first expedition of Christopher Columbus (Cristóbal Colón, 1451-1506), on October 12, 1492, to the island of Guanahaní, in the Lucayas or Bahamas, is an event celebrated for decades as a national holiday of Spain, with the qualification of Columbus Day, an ambiguous term.

Aboard three caravels (the Pinta, the Niña and the Santa María), the 90-man crew went down in history as the first to set out from what is now called the old continent in search of a new navigation route to the East, in the opposite direction. as usual until that moment.

According to his calculations, if indeed the Earth was round, navigating towards the west, they would reach India, Cipango (Japan) and Cathay (China), the lands of spices, where it was said that there were great riches.

Columbus never thought of the existence of a continent unknown to the rest of the world and for this reason he called the inhabitants of the small islands that he found aruacos (Arawaks), an error never amended.

On April 17, 1492, he had signed with the Catholic Monarchs Isabel and Fernando the so-called Capitulations of Santa Fe in which they granted him the offices of Admiral of the Ocean Sea (life and hereditary) and of Viceroy and Governor of everything he would discover.

Columbus took possession of the lands on the other side of the Atlantic Ocean in the name of the Kings; there are famous paintings on this fact, created according to the imagination of the authors. 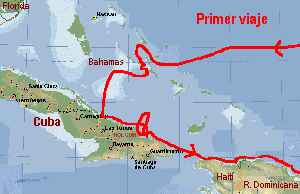 Along the way, he baptized other islands: Santa María de la Concepción, Fernandina, Isabela, Cayo Fermoso and Islas de Arena; On October 27, he sighted Cuba, where he disembarked the next day and named her Juana.

On December 6, he discovered Haiti (Hispaniola) and on the 25th he founded Villa Navidad, with the remains of the Santa Maria that had run aground.

On March 15, 1493, he returned to Spain where he was received with great honours.

In other expeditions (1493, 1498 and 1502), he recognized the Lesser and Greater Antilles and part of the continental Caribbean coast.

During his fourth and last trip he discovered Cabo Gracias a Dios (Nicaragua) and recognized the Central American coast at the narrowest point of the Isthmus of Panama – a region that he named Veraguas.

Very ill, he returned to Seville, on November 7, 1504, and died in Valladolid, Spain, on May 20, 1506, poor and abandoned, clinging to the idea of having found a new way to the lands of spices.

The new lands were baptized America, the name of the famous Italian navigator Americo Vespucci (1454-1512), who traveled (1499-1500) the north coast of the continent, in the service of Spain, and under the Portuguese flag (1502 to 1504) from Patagonia northwards.

Millions of Native Americans were exterminated by the greed of the conquerors.

With varying degrees of development, the cultures of the Mayas, the Aztecs and the Incas had flourished on the continent, while various communities were still in the gathering and hunting stage, such as the Antilles, with some agriculture.

The Antilles were populated by peaceful inhabitants within the linguistic trunk of the Aruacos (Arawaks), who passed from island to island, coming from the Orinoco River basin area, in the current Bolivarian Republic of Venezuela.

The Aruaco ethnic trunk is located deep in the American continent, in the Amazon region, from where successive groups – during a long historical period -–navigated its tributaries to the mouth of the Orinoco River and from there to the islands of the current Caribbean Sea.

The forced colonization began in this region and later it extended to the rest of the continent called later America.

The first victims were the native peoples in Hispaniola, Cuba, Puerto Rico and smaller enclaves, subjected to subhuman conditions of exploitation and wars of extermination; their disappearance as such occurred in the first century of colonization; It is estimated that more than a million Indo-Antilleans were killed.

The conquest of Mexico (1519-1521) by Hernán Cortes, who left Cuba in February 1519, and that of Peru (1531-1533), by Francisco Pizarro, put the expedition in contact with countless wealth that they usurped at any price.

In general, from 1503 to 1660, shipments to Spain totalled 181 tons of gold and 16,887 tons of silver, historical records indicate. Galleons loaded with American gold and silver shook the economic and social life of Europe in the 16th century, animated wars for several centuries and only when the flashes of these precious metals were extinguished could other great and imperishable riches emerge, now besieged by other and new enemies.

As the conquest and colonization were not peaceful events, the knowledge of the American flora and fauna occurred practically, in the first place, to mitigate hunger and thirst.

Virgin tropical forests and a rich biodiversity of flora and fauna are still preserved; it has large mineral and water reserves; the existence of all climates, as well as the embrace of the two great world oceans.

Its Amazon River is the largest, deepest and widest in the world (more than six thousand kilometres in length and a basin of more than six million square kilometres in area) which benefits Brazil, Peru, Ecuador, Bolivia and Venezuela.

It has numerous other rivers and waterfalls; Titicaca (the highest lake on earth); also Aconcagua (the highest peak in America), mountain ranges throughout its geography; what to say about the infinite and beautiful beaches of the Caribbean!

Universal civilization has been enriched by hundreds of American products (corn, cocoa, potato or yam, tomato, yucca, peanut, guava, pineapple, chilli peppers, and others), including the famous tobacco that Columbus discovered in Cuba.

The author is a historian, journalist and contributor to Prensa Latina. Slightly edited for English grammar. Maps from Ecured.cu