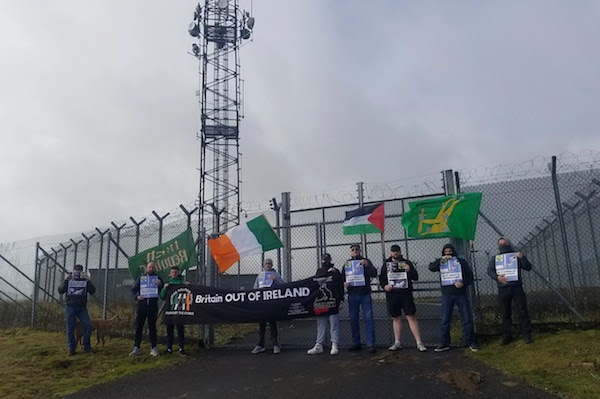 Large-scale surveillance installations used by British forces to spy on the nationalist population in the north of Ireland are the focus of a new campaign by republican activists.

Communication towers, observation posts and high powered spy cameras are increasing in size and number, particularly in elevated areas of natural beauty, such as the hills around Belfast. Bristling with technology, some devices are pointed at nationalist communities generally and some appear to be directed at specific community facilities and homes.

Activists from Saoradh this week hosted a demonstration against these installations. They pointed to the militarisation of high amenity areas around Belfast and the utilisation of public lands to spy on communities.

In a statement, they said they wanted to highlight the “covert and overt” saturation of republican communities by British forces.

“The unreformed PSNI, NCA, MI5/6, the British Army’s Special Reconnaissance Regiment and other instruments of repressive State apparatus are all involved,” they said.

“A combination of armoured vehicles, unmarked cars, drones, spotter planes, helicopters, spy cameras, bugging and tracking devices are tools used to monitor our communities on behalf of the Stormont State.

“This is in addition to heavily fortified PSNI and British Army barracks with their obvious watchtowers.”

The party said it would remain committed to “highlighting the fact that complete demilitarisation as propagated by others was a falsehood, the Crown Forces simply adapted their methods and tools.”