The suspension of Jeremy Corbyn from the British Labour Party (I)

Jeremy Corbyn was suspended from the Labour Party on October 29 by General Secretary David Evans. The reason given was that of failing to retract his reaction to a recent report by the Equality and Human Rights Commission (EHRC). This report alleged that the Labour Party under Corbyn’s leadership had breached the 2010 Equality Act through a combination of “inappropriate involvement” and harassment in complaints procedures relating to antisemitism, and inadequate training provision for those handling the complaints. Corbyn was suspended, it was said, for refusing to accept all the EHRC report’s conclusions and for claiming that “the scale of the problem was also dramatically overstated for political reasons by our opponents.” In response, Corbyn declared his intention to “strongly contest the political intervention to suspend” him.

Corbyn’s response to the report read: “Anyone claiming there is no antisemitism in the Labour Party is wrong… Jewish members of our party and the wider community were right to expect us to deal with it, and I regret that it took longer to deliver that change than it should. One antisemite is one too many, but the scale of the problem was also dramatically overstated for political reasons by our opponents inside and outside the party, as well as by much of the media. That combination hurt Jewish people and must never be repeated. My sincere hope is that relations with Jewish communities can be rebuilt and those fears overcome. While I do not accept all of its findings, I trust its recommendations will be swiftly implemented to help move on from this period.”

Aiming at Corbyn, current Labour Leader Keir Starmer stated: “If you’re antisemitic, you should be nowhere near this party… And if after all the pain, all the grief, and all the evidence in this report, there are still those who think… it’s all exaggerated, or a factional attack… you are part of the problem too. And you should be nowhere near the Labour Party either.”

A joint statement made on October 31 by the general secretaries of the Labour-affiliated unions ASLEF, BFAWU CWU, FBU, NUM, TSSA and Unite condemned the suspension as “ill-advised and unjust.”

Turning truth on its head 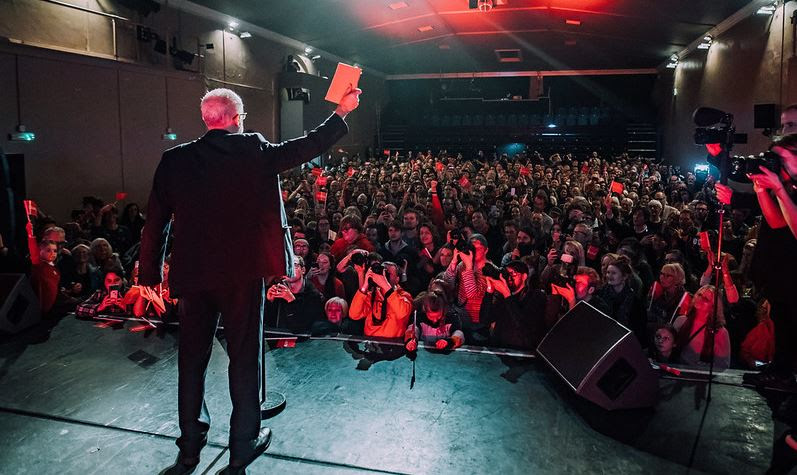 Any insinuation that attempts to implicate Jeremy Corbyn with antisemitism turns truth on its head. All along the line, he has stood in favour of the rights of all, from an anti-fascist organiser in the seventies to a prominent anti-war campaigner in the present [1].

Not only did he clearly stand against austerity, but also his election represented the growing demand for a new kind of politics. His own campaign stressed the need for fundamental change of approach to politics expressed in the call at that time to build a social movement consistent with the right of the electorate to participate in political affairs, to elect and be elected, for their will to be transformed into the legal will through a political system that serves their interests. This was reflected in Corbyn’s campaign slogan for a new “people powered politics.”

Consistent with these features of Corbyn’s platform was his characteristic readiness to take a stand on the important problems facing society, rather than follow the path of expediency or the outlook that the ends justify the means that characterises the neo-liberal consensus.

In short, what Corbyn represented was an aspiration to break from the cartel-party system, albeit incomplete and unrealised. Implicit in his vision was that people, not parties, should capture political power. This vision was necessarily compromised in the conditions in which Corbyn was operating, but even the slightest hint of that vision expressing itself in the official Opposition was never going to be acceptable to the ruling elite.

Corbyn’s election had captured the imagination of many. The Labour Party experienced a growth in membership unprecedented in recent times, particularly amongst young people, democratic, peace-loving and anti-racist people, who joined the party in the hope of occupying the space that had opened up for discussion on serious issues facing the polity and of turning things around.

When elected, on the first ballot with 59.5 per cent of the vote, he said: “We are a party organically linked together between the unions and party membership and all the affiliated organisations. That is where we get our strength from.” The possibility of any space opening for the independent programme of the working class was an equally unacceptable threat to the status quo.

For these reasons, Corbyn has been under constant attack since his Labour leadership election campaign. Furthermore, before leading the Labour Party, Corbyn was particularly well-known in the anti-war movement – not least as chair of the Stop the War Coalition from 2011 to 2015 – an important aspect of which has been to uphold the right to be of the Palestinian people.

In that context, constant allegations have been propagated to associate Corbyn with antisemitism, when nothing could be further from the truth. The progressive movements of which Corbyn is a part and which his leadership of the Labour Party represented have always upheld the rights of all, without exception. The manipulation of the issue of antisemitism to divert and disorient these forces, and to wreck public opinion to block people from forming an independent outlook, is itself abhorrent.

The vision for the future

The issue goes beyond Corbyn and the Labour Party. The Big Lie technique is in operation to paint the “hard left’ as an extreme, equivalent to the “far right”, equated in every way including antisemitism. The “centre ground’, meanwhile, is identified with the neo-liberal status quo. But this official centre ground so defined is in total crisis, and increasingly overtly dictatorial, reorganising the state around rule via police powers, governed by a small clique wielding those powers, and criminalising all thought that is opposed to an official way of thinking.

Such allegations have been used to generate an atmosphere of hysteria in a generalised campaign to discredit and sow division amongst the progressive movements, to cover the reality that the so-called centre is itself in essence of the extreme right, where everything is put in the service of the most powerful monopolies. The burden of the economic crisis is shifted onto the working population through austerity measures and rights are not recognised. People are denied a say in these most important matters that affect their lives, such as the direction of the economy, while political problems are made problems of law and order. Police are given further powers to act with impunity under the spurious theory of balancing rights against security, as opposed to the modern conception that security lies in the defence of the rights of all. Legislation is passed that violates the right to conscience and attempts to establish an official set of “British values” around the notion that all should line up behind national-chauvinistic aims, aims which are increasingly pursued through intervention and war.

Jeremy Corbyn was seen to represent opposition to this direction.

Under the banner of returning Labour to electability and making it a “broad church”, Keir Starmer represents the return to cartel-party politics. To this end, it is not enough that Corbyn be defeated. Corbyn was never to be permitted to assume the role of Prime Minister, and all he upheld was blocked at every turn. No alternative is permitted within the present arrangements. Now that he has been removed, all vestiges of his legacy are to be eradicated, and his character itself is to be slandered, all with the aim of preventing such a phenomenon as Corbyn from ever appearing again. The ultimately futile aim is to wipe thought of an alternative from the minds of the party and the public at large.

The forces of the establishment would seek to expunge the Labour Party of all elements that strive for the New. It is to remain a party firmly of the Old, a cartel party that acts as part of the arrangements of state and acts as a gatekeeper barring people from decision-making power.

These attacks on Corbyn and his supporters expose the whole party system. They serve to underline how people cannot put their faith into some other force, but must rely on building their own forms of organisation to enables them to speak and act in their own name, that confers authority to themselves directly as they strive for empowerment and democratic renewal. Try as it might, the ruling elite cannot kill off this vision.

1. For example, Corbyn organised a demonstration against a 1970s National Front march through Wood Green; spoke on the 80th anniversary of the Battle of Cable Street, noting that his mother was a protester signed numerous early day motions condemning antisemitism; in 1987, campaigned to reverse Islington Council’s decision to grant the planning application to destroy a Jewish cemetery; and in 2010, called on the UK government to facilitate the settlement of Yemeni Jews in Britain. He also took part in a ceremony in his Islington constituency to commemorate the original site of the North London Synagogue and visited the Theresienstadt Ghetto, calling it a reminder of the dangers of far-right politics, antisemitism and racism. (Source: Wikipedia.)