A 9,000-word story for GQ (10/20/20) about the mystery ailment of a CIA officer in Moscow has become the unlikely subject of a weeks-long media storm.

Marc Polymeropoulos told the magazine’s correspondent Julia Ioffe that in December 2017, while staying at a Moscow hotel (or “enemy territory,” as she described it), he was suddenly struck with strong feelings of head pain, nausea and dizziness. All the symptoms Ioffe lists are common to many types of migraine, a condition an estimated 1 billion people have suffered from. Yet Polymeropoulos—and Russiagate proponent Ioffe—suspected something else: some sort of hitherto unheard-of Kremlin microwave gun.

Ioffe is completely credulous of her professional spy interviewee—presenting him as a heroic figure who “hunted terrorists” in Pakistan and Yemen for a living—despite the fact that his story is riddled with inconsistencies. Just hours after apparently being savagely attacked by Vladimir Putin’s thugs, Polymeropoulos felt well enough to not only travel to St. Petersburg (over 400 miles away), but also to walk for several miles through a Russian winter, go sightseeing and boozing in a number of “dive bars,” and do his Christmas shopping as well.

Once back in the US, he was diagnosed with occipital neuralgia, an inflaming of the nerves in the neck, a condition which leads to frequent migraines. As the website of the American Association of Neurological Surgeons notes, “Many cases can be attributed to chronic neck tension or unknown origins.”

The GQ article includes official denials of the existence of a mystery weapon from both Russia and the CIA, who made clear that many of Ioffe’s claims were “simply not true”; Polymeropoulos claims that the agency flatly told him he was “making it up.”

“If there was credible intelligence that showed an adversary purposefully harmed a CIA officer, you can bet Director [Gina] Haspel would act swiftly and decisively,” said an agency spokesperson. For Ioffe, this was not a reason to spike the story, but more evidence of the government’s “obstinate lack of willingness to condemn Vladimir Putin or Russian attacks in any way.”

Ioffe, who was fired from Politico in 2016 for a tweet suggesting an incestuous relationship between Trump and his daughter Ivanka, has been among the most strident proponents of the theory that Russia hacked the 2016 election and controls the Trump administration, going so far as to suggest that the official Twitter account of the Arkansas Democrat-Gazette (the oldest US newspaper west of the Appalachians) was a Russian bot, because of its use of “Russian quotation marks.” (The “»” sign she referenced is actually commonly used as an arrow on Twitter.)

Maybe he will marry a Russian woman, who will quickly shed her supple, feminine skin and become a tyrant, and every dark winter morning, Snowden will sit in his tiny Moscow kitchen, drinking Nescafe while Svetlana cooks something greasy and tasteless, and he will sit staring into his black instant coffee, hating her. The Washington Post (10/25/20) on “invisible attacks”: “No one knows for sure who is responsible, but some evidence points to Russia.”

The Moscow story is reminiscent of a similar recent occurrence in Cuba, where a number of US diplomats reported similar headaches and nausea after hearing a piercing sound. Corporate media immediately suggested that some sort of “sonic weapon” was likely to blame (e.g., Vox, 8/28/17; CBS News, 8/23/17; USA Today, 8/10/17). It was only when the Associated Press (“>10/17/17) published recordings that US officials in Havana had made of the noise that a more mundane culprit was identified: crickets. The dastardly sonic weapon was actually, unmistakably, the high-pitched mating call of the short-tailed cricket, as any Cuban would likely have known. Ioffe references the Cuban conundrum, plus a similar case of American diplomats in Guangzhou, China, hearing piercing noises, but does not mention the cricket explanation at all.

Incidents like these are surprisingly common in Cold War history. Going further back in time, during the 1980s, the US government formally accused the Soviet Union of supplying chemical weapons—so-called “Yellow Rain”—to Communist states in Southeast Asia to use on American troops fighting there. While media took it deadly seriously at the time, it is now commonly accepted that the “chemical weapon” was actually just honeybee feces (Scientific American, 9/85; New York Times, 9/3/87). 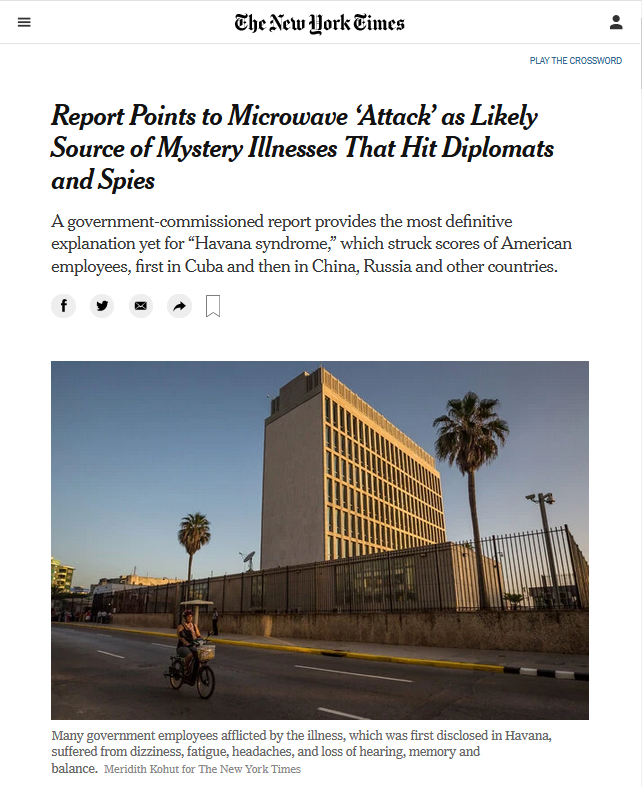 Completely disregarding the cricket explanation, a new report from the National Academies of Sciences, Engineering and Medicine released earlier this month about the 2017 Havana incident suggested that the symptoms displayed by US government workers there were consistent with those of exposure to microwave energy, although it very prominently warned that “evidence has been lacking, no hypothesis has been proven and the circumstances remain unclear.” Russia is mentioned in only one paragraph of the 77-page document, which does not make any accusations against any country. Experts immediately challenged the report as completely incoherent “science fiction.”

Despite this, a host of big media outlets (e.g., Slate, 12/5/20; Mother Jones, 12/5/20; Reuters, 12/6/20; Vox, 12/6/20) immediately took the idea of a Russian attack on the embassy in Cuba as highly likely. There is “strong evidence that the incidents were the result of a malicious attack,” the New York Times (12/5/20) informed its readers. Other explanations, it said, were “unlikely.” “CIA analysts who are Russia experts, diplomats and scientists contend that evidence points to Moscow,” it added. NBC News (12/7/20), meanwhile, festooned its broadcast with pictures of the Kremlin (despite the event happening in Cuba), telling viewers that “Russia has a long history of working on these weapons.”

“Is Russia Microwaving American Spies?” read the headline of Ben MacIntyre’s London Times column (10/30/20). “Dozens of US officials have been hit by ‘Havana Syndrome’ but no one seems to want the truth to come out,” he added, also claimng that US officials in Guangzhou had suffered a similar fate to Polymeropoulos in Moscow.

The Washington Post editorial board (12/9/20) took the news to its logical endpoint, combining the Moscow, Havana and Guangzhou cases, together with other discredited Russiagate theories, to demand that President-elect Joe Biden must “call out” Russian President Vladimir Putin. Given that the Bulletin of the Atomic Scientists moved their famous doomsday clock—symbolizing the risk of the destruction of the planet through nuclear weapons—to the closest it has ever been to midnight, upping tensions with Russia would be reckless in the extreme. For the single-minded Post, however, Putin’s denials are actually further proof of devious, “asymmetric warfare” being waged against America.

The problem with this whole narrative, journalistically, is that with tremendously high stakes it relies largely on the testimonies of US officials, many of them anonymous, who have a clear incentive to lie and defame three countries with whom the United States is currently ramping up tensions. Overreliance on official sources has led to a number of terrible media blunders of late (FAIR.org, 12/3/18, 7/3/20). As we wrote (2/28/20):

It is the job of the covert security services to lie and manipulate. They are among the least trustworthy groups in the world, journalistically speaking, as part of their profession involves planting fake information. The only group less deserving of blind faith than spies would be anonymous spies.

Perhaps even more troubling is the close relationship many of the outlets promoting the story have with the intelligence services. One author of an NBC News article (12/5/20) on the subject, Ken Dilanian, is known to have had a long term “collaborative” partnership with the CIA, explicitly promising the agency positive news coverage, even sending them copies of his stories for them to edit and rewrite (Intercept, 9/4/14). Meanwhile, the London Times’ MacIntyre was named as part of a cluster of journalists who worked with a British government-funded disinformation think tank, the ironically named Integrity Initiative, whose sole purpose appears to be pushing out anti-Moscow propaganda into the media.

Why is there so little skepticism of fanciful official claims in corporate media? If the US truly believed that its agents and diplomats were being attacked, it would surely treat it as an act of war. The US bombed Nicaragua because it insulted an American business magnate. Thus, it is hardly likely to overlook a direct attack on its representatives. Surely more plausible explanations for these maladies include headaches, crickets, paranoia, mass hysteria or simply lying, rather than a vast global conspiracy using heretofore unknown science fiction weapons in order to mildly inconvenience a few American operatives.

The next time a CIA officer gets a headache, we should give him an aspirin, not risk starting World War III.