In a little-mentioned program, NATO is using the global Covid 19 pandemic as the pretext to deploy military forces in the public health system, presented as “essential” and “good Samaritan saviours” and a “normal” response to “exceptional circumstances”, even as it exclaims against medical programs of Russia, China and Cuba. Canada, which has placed the federal distribution of vaccines under the administration of the Canadian Forces, deployed hundreds of soldiers into long-term care facilities and Indigenous communities with disastrous consequences, is no isolated exception, as this news item from Republican News in Ireland illustrates. 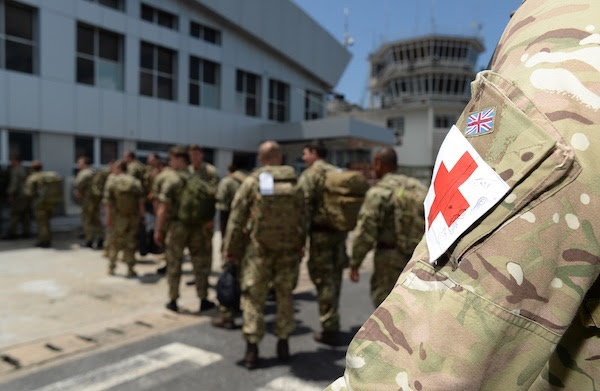 (January 23) – A deployment of British Army paramedics to hospitals in occupied Ireland has angered many nationalists, particularly among families of those killed and injured by British soldiers.

Following a request by the Stormont authorities, the occupying British Army garrison based in the North of Ireland is to be increased by over a hundred.

An unknown number of “combat medical technicians” are to be sent directly into hospitals around the Six Counties. The move has no parallel in Britain itself, where military staff have supported the vaccination programme, but have not been asked to provide hospital care.

The move by the British Forces to involve themselves in Irish hospitals has echoes of previous propaganda efforts in schools and colleges across the North, particularly in nationalist areas.

The unionist Minister of Health, Robin Swann, has claimed the move is a result of the recent post-Christmas spike in cases of Covid-19. He would not reveal which hospitals the British military would be sent to, but indicated that due to “security concerns” certain hospitals would be omitted from the programme.

The British Army has also refused to say where the additional deployment will come from, and whether soldiers arriving from Britain would be required to self-isolate in accordance with Covid-19 regulations.

Sinn Féin did not oppose the new deployment. A party spokesman said: “We do not rule out any measures…and any effort to make the threat posed by Covid-19 into a green and orange issue is divisive and a distraction.”

However, Assembly member and Sinn Féin health spokesperson Pat Sheehan expressed concern that the British Army staff would “get in the way of the real professionals who are doing the work to save lives.”

The move has distracted from growing political pressure for a 32-county approach to defend the island from several new variants of the virus following the arrival of a deadlier and more virulent mutation from England.

Aontú Derry Cllr Emmet Doyle criticised what he said had been a unilateral decision by the Ulster Unionist Party to bring in the soldiers, which he said was “not appropriate” and would cause “deep division” in many areas.

“The British Army will not been viewed by many of the people I represent as being concerned with medical care. The idea will go down like a tonne of bricks in many Nationalist and Republican areas.”

Saoradh also condemned what it viewed as an act of hypocrisy which it said “laid bare the incessant failures of Stormont”. They said the irony was not lost on Republicans that “the British war machine, which has wreaked havoc on this island” was now being passed off as “Good Samaritan saviours”.

“Military reports on seniors’ homes in Ontario and Quebec: The crisis reveals that decision-making power must be taken out of the hands of those who are unfit to govern,” Peggy Morton, June 1, 2020