William Edward Burghardt “W.E.B.” Du Bois was born on February 23, 1868 in Great Barrington, Massachusetts. His stands as a political activist, human being, author, editor, sociologist, historian and Pan-Africanist earned him a place of great honour as an American leader second to none. W.E.B. Du Bois did his studies at Humboldt University of Berlin, Harvard University, Harvard College, Fisk University and the school of life. He died at the age of 95 in Accra, Ghana, on August 27, 1963.

On this occasion, we are posting the tribute to Dr Du Bois of Paul Robeson, another great American leader, second to none.

Casting my mind back, my first clear memory of Dr. Du Bois was my pride in his recognized scholarship and authority in his many fields of work and writing. In high school and at college our teachers often referred us to standard reference works on sociology, race relations, Africa and world affairs. I remember feeling great pride when the books and articles proved to be by our Dr. Du Bois, and often loaned these to my fellow-students, who were properly impressed by his universally respected and acknowledged authority.

Robeson’s article on Du Bois appeared in the Winter 1965 issue of Freedomways | Click to enlarge.

The Negro students joined the [National Association for the Advancement of Colored People (NAACP)] which Dr. Du Bois helped to organize and build; we read religiously The Crisis of which he was editor for so many years, and in which he wrote clearly, constructively and militantly on the complex problems of the American scene, on the Negro question, on Africa, and on world affairs. He called upon the American people, and particularly upon the whole labour movement, to understand the need for unity in the struggle of the working masses, including the Negro, for a decent standard of living.

We spoke of Dr. Du Bois as Our Professor, The Doctor, The Dean, with great respect, paid close attention to his pronouncements, and many of us followed him proudly marching down New York’s Fifth Avenue in a protest parade led by the NAACP for civil rights. Dr. Du Bois talked and wrote and marched for civil rights. He insisted upon first-class citizenship for all Americans, upon full equality of opportunity, dignity, legal rights for us all. And he directed universal interest and attention to our Negro history and our rich African ancestry, to give us solid background for our struggle. All this way back many, many years ago, long before I graduated from college in 1919. Our good doctor, this great man, understood our situation, and our world, and was often a lone but clarion voice pointing out the urgent need for change.

Dr. Du Bois was a distinguished historian as well as a social scientist. We often talked about the wealth and beauty of our folk heritage, particularly about Negro music which he loved and found deeply moving. He often stressed the importance of this special contribution to American culture. We had interesting discussions about the likeness of our Negro folk music to many other folk musics throughout the world.

Our professor was not only a great and recognized scholar, he was also our most distinguished statesman. His knowledge of world affairs, his founding of the Pan African Congress, his continuing work in many capitols of the world for African independence, made him widely known and respected abroad, and beloved in Africa. His book The World and Africa was one of the first important books on modern post-war Africa, and helped to point out and focus attention on the continuing exploitation of Africa by the “free world.” We of the Council On African Affairs were very fortunate and proud when Dr. Du Bois joined our organization as Chairman in 1949. His knowledge, experience and wisdom, together with our very able and devoted Executive Secretary, Dr. Alphaeus Hunton, helped us to make some meaningful contribution to the struggle of the African people, particularly in South Africa.

W.E.B. Du Bois (second from right) at the Pan Africanist Congress in Brussels, 1921.

Fifteen years ago, when we built the Negro newspaper Freedom, under the very fine editorship of our friend and colleague, the late Louis Burnham, Dr. Du Bois was one of our very frequent and most brilliant contributors. His clear, forthright, informative article on Africa, on the Negro in America, on the changing world situation added stature to our publication.

Association, discussion and work with this great man were always richly rewarding.

Probably as a result of his research and work in sociology, his close scientific observance of American history and social scene, his keen and continuing interest in Africa and in international affairs, Dr. Du Bois became a strong supporter of Socialism as a way-of-life. He followed the rise of the Soviet Union with understanding and appreciation, and made friends with the whole socialist world. He welcomed not only their rejection of racism, but also, as a social scientist, he appreciated their constructive and practical interest in, and effective governmental activity for the welfare of the vast majority of the people. Dr. Du Bois said many times that he believed the 1917 Russian Revolution was the turning-point in modern history, and was of first importance in the shaping of a new world with the emergence of many other socialist lands.

So that it was logical, and deeply moving when, in 1961 – having the whole world picture in focus, Dr. Du Bois became a member of the Communist Party of the United States, and still later became a welcome and honoured citizen of Ghana, in his beloved Africa. He followed with deep concern the independence struggles in various parts of Africa, and knew that these struggles must be won, so that Africa and the African people could develop their great potential. With his brilliant mind, his far-reaching education, his scholarly academic background, Dr. Du Bois was nevertheless a very much down-to-earth human being, with a delightful and ready wit, a keen and mischievous sense of humor, and enjoyed life to the full. I especially remember his gay spontaneous laughter.

2011 photo of centre named in honour of Dr. Du Bois in Accra, Ghana. 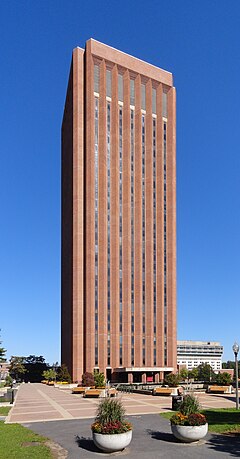 The 24-story W. E. B. Du Bois Library at the University of Massachusetts Amherst, Amherst, Massachusetts, opened in 1979. It was renamed in his honour following a popular student movement in the 1990s due to his stands fighting imperialism and capitalism.

And I remember particularly a wonderful Thanksgiving dinner at his home in Grace Court in Brooklyn about ten years ago. He had invited some guests from the United Nations, because he knew they had heard and read about Thanksgiving, but had no personal experience and understanding of this special American holiday. So this was as typical a Thanksgiving dinner and evening as he and his wife Shirley could make it, with the good Doctor a gay and witty host, explaining everything step by step – from turkey and cranberry sauce to pumpkin pie and early American history. After the delicious dinner, over coffee and brandy before the log fire burning in the spacious living room fireplace, he spoke of Frederick Douglass, whose portrait hung over the mantel, and of his place in American history. That day is a happy and cherished memory.

I also remember so well the political campaigning of Dr. Du Bois when he was candidate of the American Labor Party of New York for the U .S. Senate. In the usual free-for-all scramble which American political campaigns involve, Dr. Du Bois always remained calm and dignified. He never descended to shrill attack or name-calling, but discussed the real issues with brilliant speeches in which he combined his keen intelligence and trenchant humour. All of us worried about how he, at the age of 82 and seemingly fragile, would withstand the gruelling pace of the campaign. But Dr. Du Bois took care of his health as intelligently as he did everything else, and those who planned meetings at which he would speak knew that if he was scheduled for 10 p.m. for half-an-hour, then no matter what the unpredictable state of the meeting, at 10 o’clock precisely Dr. Du Bois would walk onto the platform, speak brilliantly for half-an-hour, rest a while, then go on his way.

The more Dr. Du Bois observed and understood world events, the more he recognized that peace was a prime issue in this nuclear age. And so, typically, he became associated with peace movements all over the world, and worked actively for peace. In 1949 he became Chairman of the Peace Information Center here in our country, and was later indicted, tried and acquitted for his leadership in work for peace.

When Dr. Du Bois and Shirley came to London in 1958, we were living in a flat in Maida Vale. Soon after their arrival, Eslanda and I went to Moscow for a long visit and turned our flat over to the Du Boises. We were very happy when they told us they had enjoyed their stay there, and we had thus helped to make their London visit comfortable. After they left we felt we should put a plate on the door saying “Dr. Du Bois slept here.”

Du Bois and Shirley at 1959 May Day parade in Moscow.

My last memory of Dr. Du Bois is in London, in less happy circumstances, in 1962. The doctor, then 94 years old and very ill, had been brought to London for a very serious operation. He was tired and weak, and we worried about how he could stand the ordeal. I was ill in a London nursing home at the time, and felt very sad and helpless about the Doctor’s condition. So that when my wife, who visited him regularly in the hospital, told me that he wanted very much to see me and had asked especially for me, I got up and went to London University Hospital and we spent some time together. Ill as he was, he told me about his work on the Encyclopedia Africana; we talked about the progress of the Negro revolt at home in America, about the power and influence of the Socialist world, about the marvellous coming-of-age of the African people.

I visited him once again in the hospital, and was delighted and greatly relieved to find him miraculously improving. This was in August 1962.

While I remained in the London nursing home, still ill, Dr. Du Bois recovered from his operation, got up and with Shirley traveled to Switzerland where he rested in the sun, went to Peking where they attended the October Celebration, on to Moscow where they attended the November Celebration, and back again to London in late November, where Dr. Du Bois visited me in the nursing home. He gave a fascinating account of his trip and experiences, which he had enjoyed immensely.

That was the last time I saw him. He and Shirley went on to Ghana where a marvellous welcome awaited them.

My cherished memories of Dr. Du Bois are his brilliant and practical mind, his intellectual courage and integrity, his awareness of the world and of our place in it – which helped to make us all also aware. His fine influence on American thinking, and on Negro thinking will continue to be incalculable. We admired, respected, appreciated and followed him because he was clear and forthright, because he was militant with a fighting strength and courage based upon wide knowledge, great wisdom and experience. I remember too his deep kindness.

Dr. Du Bois was, and is in the truest sense an American leader, a Negro leader, a world leader.

The Suppression of the African Slave-Trade to the United States of America, 1638–1870, Volume I, Harvard Historical Studies, 1896

Darkwater: Voices From Within The Veil, 1920