When asked if he would instruct soldiers to kill Palestinian children, Bennett said, “They are not children — they are terrorists. We are fooling ourselves. I see the photos.” 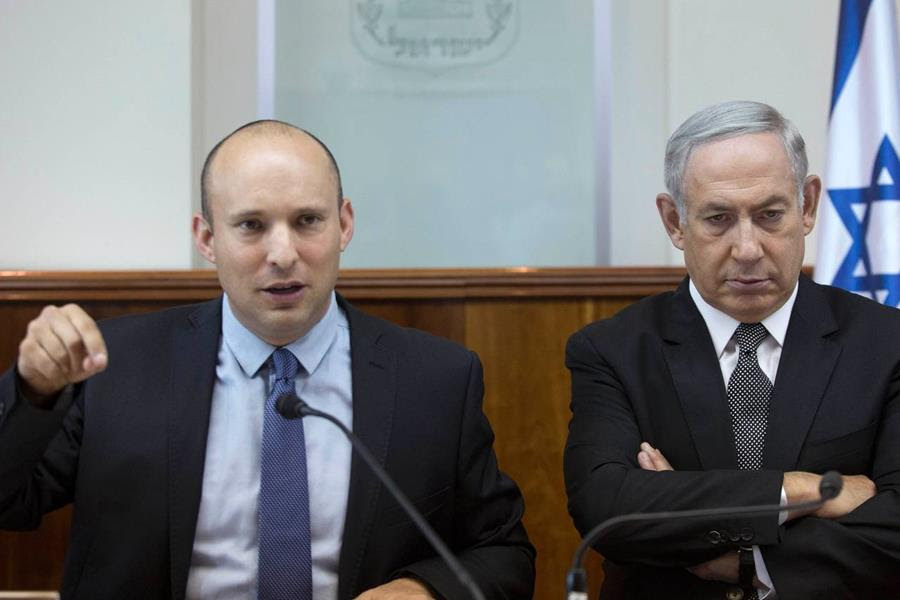 An announcement of a new coalition government in Israel headed by Naftali Bennet is expected  today.

Every head of Zionist Israel since its illegitimate formation in 1948 has either been a terrorist or the son or daughter of a terrorist.

Historically, the “leaders” and “heroes” of the British-sponsored Zionist project, for instance, were the dregs of counter-revolution and the anti-Semitic White Armies of Tsarist Russia and Poland. Zionism offered itself to the imperialist powers of the day as a counter-revolutionary movement. In the 1903-05 period Theodor Herzl and Vladimir (Ze’ev) Jabotinsky, as noted by Israel Shahak in his book Jewish History, Jewish Religion, allied themselves with Tsarist Russia.

Netanyahu was the son of Benzion Netanyahu from Poland and Lithuania, who was secretary to Jabotinsky, originally a police agent in Odessa, Ukraine during the 1905 revolution for the Tsar of all Russias.

In 1921, while attending a World Zionist Congress in Prague, he negotiated a formal pact with a diplomatic representative of Petliura, head of the short-lived Ukrainian People’s Republic (1918-1921) against the Bolsheviks in that country. The hated Petliura is widely known for organizing pogroms and massacres of the Jewish population – 30,000 in 1919 alone – and was himself assassinated in Paris on May 26. 1926 by a Jew, Shalom Schwartzbard, in revenge. (The jury acquitted him.)

Jabotinsky preached a “Greater Israel,” with a Jewish majority outweighing the Arab population, to be won by force and guarded, in his famous phrase, by an “Iron Wall.”

In the 1930s Jabotinsky formed links including military training (the Betar Naval Academy) with Mussolini’s fascist Italy which controlled Libya and attacked and seized Abyssinia (Ethiopia) in 1935, and proposed an alliance with Nazi Germany. Benzion Netanyahu was a pallbearer at his funeral when he died at a Betar camp near New York while visiting the United States in 1940. The two were on a fund-raising mission.

Another two prime ministers, Menachem Begin and Itzhak Ysernitzky (known later as Yitzhak Shamir), were involved in Betar, Jabotinsky’s youth organization in Poland. They became officers of the anti-semitic Polish Army of General Anders which fled the German Nazi invasion of Poland in 1939 to the Soviet Union where they were immediately interred. Ferried to Iraq by Britain, they “deserted” and became successively leaders of the Irgun and the Stern gangs, both of which committed hundreds of terrorist crimes and massacres of Palestinians and Jews, including blowing up the King David Hotel on July 23, 1947, when 91 persons were killed and 45 were seriously injured. Many members of Anders’ army were brought to Canada after WWII amongst other fascist collaborators from Eastern Europe and the Baltics, while Jewish immigration was blocked.

The activities of Ariel Sharon went further. Sharon, who died in 2014, escaped punishment for war crimes; in fact, he became an Israeli prime minister. Sharon was incriminated in two massacres: 1953 – the village of Qibya in the Jordanian-occupied West Bank, killing 69 people, most of them women and children; 1982 – The Sabra and Shatilla massacres of Palestinians in Beirut refugee camps, carried out by Lebanese Phalangist militias, but under the control of Israel Defense Forces. As many as 3000 Palestinians were murdered.

Both parents of Ehud Olmert – the former Israeli prime minister (2006–2009), cabinet minister and mayor of Jerusalem, recently released from jail for corruption – were members of Irgun.

Former Minister of Foreign Affairs in the Olmert government, Tzipi Livni, incriminated as a war criminal for the bombing of innocent civilians in Gaza in 2009, was likewise a child of the Irgun. Eitan Livni, her father, was chief of operations of Menachem Begin’s Irgun until 1947, which repeatedly attacked British officials and soldiers in the 1940S as well as civilian targets like public markets. His gravestone bears a map of Greater Israel.

These “leaders” also included émigrés from the “socialist” and “labour” wing of Zionism such as Poale Zion from Tsarist Russia, the most prominent of whom was David Ben-Gurion, a native of Plonsk, Poland, a “labour zionist”, chairman of the Jewish Agency Executive (1935-1948) and future leader of the Haganah terrorist army and the Israeli state.

The ugly history of Naftali Bennett

Empire-building requires trained political leaders imbued with doctrines of colonial governance in annexed territories to subvert local governments and people’s resistance to seize control. Bennett is no exception. Like Netanyahu, he has dual American-Israeli citizenship.

Born to American parents who immigrated from San Francisco to Israel following the 1967 war of aggression, in which Israel occupied the West Bank, Naftali Bennett is a reactionary, ultranationalist Zionist who staunchly opposes Palestinian statehood or self-determination of any kind in Palestine/Israel.

·        Although not a settler himself, from 2010 to 2012 he was head of the main political body (Yesha Council) that represents Israeli settlers living on occupied Palestinian land in violation of international law and is a staunch supporter of Israel’s settlement enterprise.

·        Bennett has repeatedly stated his categorical opposition to a Palestinian state being created in the occupied territories. Instead, he proposes Israel unilaterally annex the approximately 60 per cent of the Palestinian West Bank that fell under full Israeli control under the supposedly temporary Oslo Accords, where most Israeli settlements are located. In 2014, Bennett told journalists Israel “will be gradually attempting to apply Israeli law [annexing] on Israeli controlled areas of Judea and Samaria [the occupied West Bank].” In 2013, he declared: “I favor implementation of Israeli sovereignty over the zone where 400,000 (settlers) live and only 70,000 Arabs.” Bennett also ridiculed then-ongoing US-led negotiations under the Obama administration, declaring it’s “all a joke.”

·        In 2014, Bennett wrote an op-ed for The New York Times, “For Israel, Two-State Is No Solution,” repeating once again his opposition to Palestinian self-determination and his plan to annex 60 per cent of the West Bank. In 2013, he told the New Yorker magazine: “I will do everything in my power, forever, to fight against a Palestinian state being founded in the Land of Israel.” A few months later, in June, he declared: “The most important thing in the Land of Israel is to build, build, build [settlements]. It’s important that there will be an Israeli presence everywhere. Our principal problem is still Israel’s leaders’ unwillingness to say in a simple manner that the Land of Israel belongs to the People of Israel.”

·        In 2014, then-Minister of the Economy and Religious Services Bennett released a letter addressed to Palestinian citizens of Israel, who make up about 20 per cent of the population, warning them against becoming a “fifth column.” According to press reports, the letter, written in Arabic, was riddled with errors.

·        Bennett also advocates increased Jewish control over the revered Noble Sanctuary mosque complex in occupied East Jerusalem, known as the Temple Mount to Jews, which is the third holiest site in Islam. Extremist messianic Jews want to build a temple in the Noble Sanctuary, which would spark a major religious conflagration in the region and beyond. In February 2014, Bennett told a meeting of the Conference of Presidents of Major Jewish Organizations that Israel was attempting to exercise greater control over the Noble Sanctuary, stating that he had already taken measures that would “ultimately influence the eastern side of Jerusalem, and that will include the Temple Mount.”

·        In 2020, Defense Minister Bennett ordered a stop to Israeli army-run testing of Palestinian residents for COVID-19 in the Gaza Strip in the midst of the pandemic.

·        In October 2018, Bennett said that if he were defense minister he would order a shoot to kill policy against Palestinians attempting to walk across the boundary between Israel and Gaza, where nearly 2 million people have been trapped under an illegal Israeli siege and naval blockade for 15 years. When asked if he would instruct soldiers to kill Palestinian children, Bennett said, “They are not children — they are terrorists. We are fooling ourselves. I see the photos.” At that point, at least 140 demonstrators had been killed by Israeli soldiers, including at least 29 children according to the UN, as well as medical workers and journalists, and more than 29,000 others injured, as part of the Great March of Return.

·        In 2013, Bennett sparked controversy when it was reported that during a cabinet meeting on releasing Palestinian prisoners he declared: “If we capture terrorists, we need to just kill them… I’ve already killed a lot of Arabs in my life – and there is no problem with that.” Asked for clarification by journalists, a spokesperson said Bennett meant Israeli soldiers should be ordered to kill Palestinians instead of capturing and imprisoning them.

The IMEU is an independent non-profit that works to provide resources and accurate information about Palestine and the Palestinians to journalists.