The Canadian Network on Cuba (CNC) issued a press release on July 14 on its petition to the Canadian parliament to defend Cuba’s right to be and oppose the US destabilization of the island republic. Formed in 2002, the CNC and its chapters coast-to-coast works for the strengthening of friendship and solidarity between the peoples of Canada and Cuba  Here is the full text:

Canadians have emphatically demanded an end to the U.S. siege of Cuba, with thousands declaring that Cuba is not alone by signing the parliamentary petition condemning Washington’s economic war and campaign of subversion against the heroic island nation. For more than 60-years in the longest lasting regime of sanctions in history, Washington has imposed an economic blockade on Cuba, seeking to cut off the island’s trade, commercial and financial links to the rest of the world.

The petition initiated by the Canadian Network On Cuba (CNC) is sponsored by Niki Ashton, member of Canada’s parliament for the federal constituency of Churchill—Keewatinook Aski in the province of Manitoba.

“I am proud to stand with [the CNC] and so many in solidarity with the Cuban people,” states Ashton.

Julio Fonseca, president of the Asociación de Cubanos Residentes en Toronto (Association of Cubans Living in Toronto), echoes this sentiment, “Help end the criminal and immoral US blockade on Cuba.

It is hurting people and deeply violates the rights of the people of Cuba.  On behalf our families in both Cuba and Canada, I ask you to please support this petition.”

In the midst of the COVID-19 pandemic, the U.S. government is being particularly vindictive.  Despite universal international condemnation, Washington has maintained the cruel blockade of Cuba AND also imposed additional punitive measures, severely limiting the island nation’s access to medicine, food, and equipment necessary to preserve the health of Cubans.

The petition also calls on the Canadian Government to demand that the United States government cease its economic aggression. On June 23rd, Canada was counted among the ranks of the international community who overwhelmingly rejected U.S. economic sanctions against Cuba in the United Nations General Assembly vote of 184 to 2.

Canadians have a profound respect and admiration for the people of Cuba. Irrespective of their political or ideological positions, Canadians stand for the building of genuine friendship with the island nation: relations based on mutual respect, equality and recognition of Cuba’s right to self-determination and sovereignty.

We call on all Canadian citizens and residents, especially those one-million annual visitors who have seen Cuba for themselves, to sign the petition demanding the end of the economic war on the people of Cuba.The petition and number of signatories can be found on the House of Commons webpage: https://petitions.ourcommons.ca/en/Petition/Details?Petition=e-3456

The text of the petition is:

PETITION TO THE HOUSE OF COMMONS

The government of the United States has imposed economic sanctions, amounting to an economic war, against Cuba for more than 60 years, constituting the principal obstacle to Cuba’s social and economic development, having cost in excess of $100 billion;

The Government of the United States has pressured and coerced other countries to participate in its regime of economic sanctions against Cuba;

The United States economic sanctions and the campaign of subversion against Cuba are a violation of international law, the right of self-determination and the human rights of the people of Cuba; andSince 1992, the international community, including Canada, has rejected United States economic sanctions against Cuba through overwhelming votes in the United Nations General Assembly.

We, the undersigned, citizens and residents of Canada, call upon the Government of Canada to:

1. Call on the Government of the United States to end all economic sanctions against Cuba;

2. Call on the Government of the United States to cease its campaign of subversion and policy of hostility and aggression against Cuba;

4. Take immediate steps and actions through the implementation and enforcement of, among others, the Foreign Extraterritorial Measures Act, in order to preserve Canadian sovereignty and ensure that Canadian companies and other entities do not participate in United States economic sanctions against Cuba; and

5. Ensure that its relations with Cuba be based on equality and the respect of sovereignty, independence and the right of self-determination.

The petition and number of signatories can be found on the House of Commons webpage: https://petitions.ourcommons.ca/en/Petition/Details?Petition=e-3456

Monthly Virtual Picket to Lift the Blockade on Cuba!

LIFT THE U.S. BLOCKADE ON CUBA! 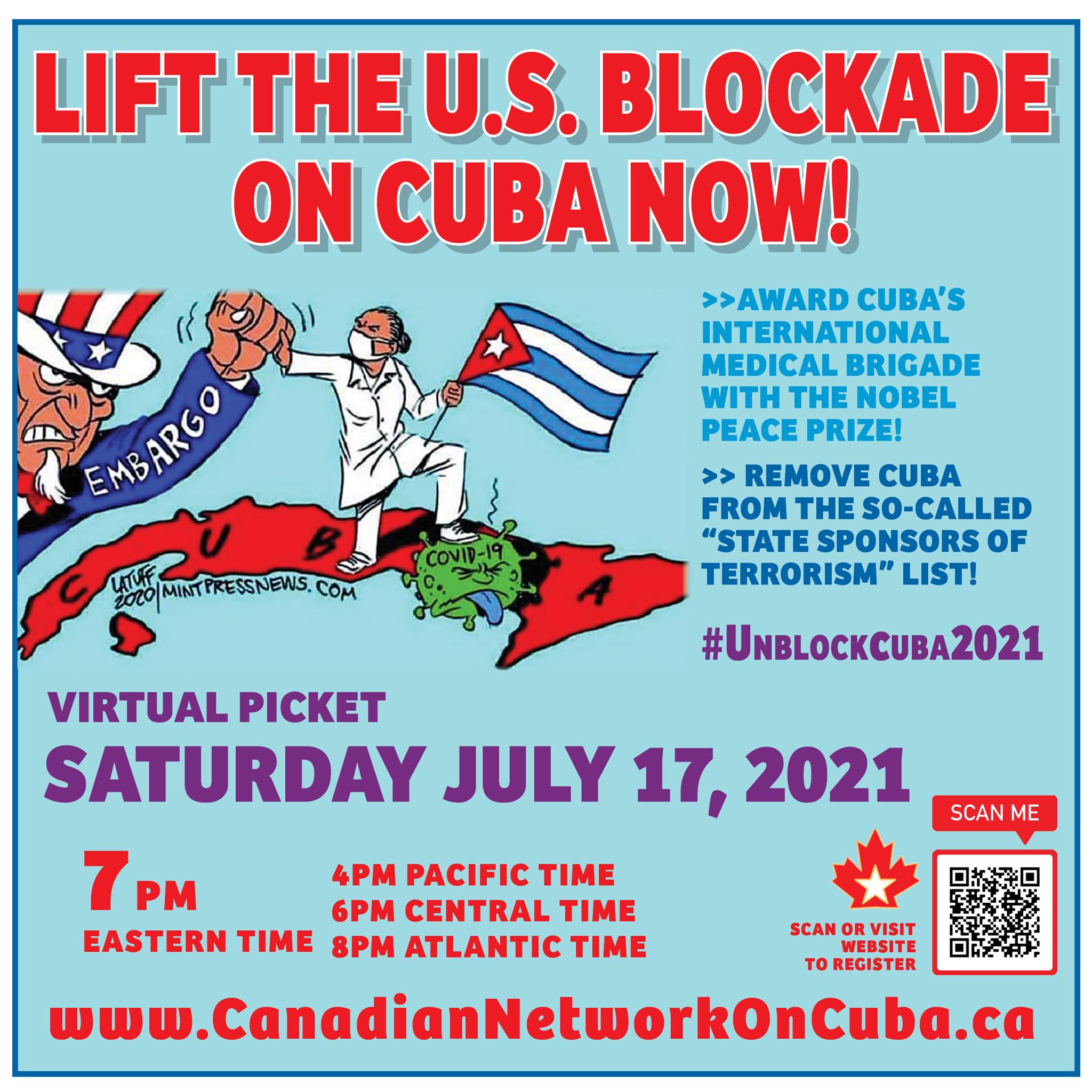