Chinese ‘disinformation’ and US propaganda 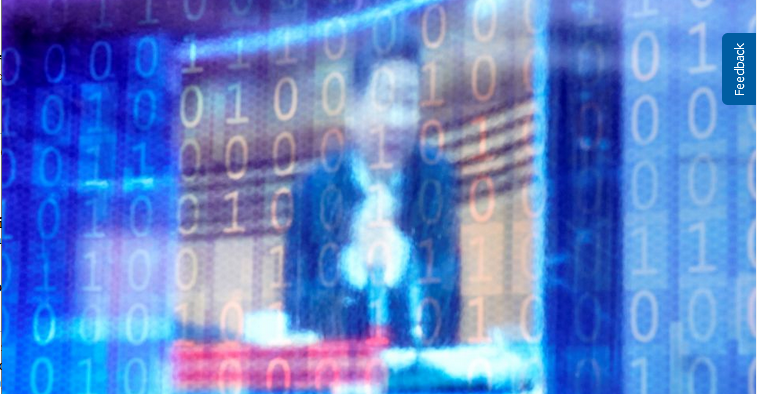 In Western media’s latest anti-China crusade, unsubstantiated allegations of a Chinese disinformation campaign – which the reports themselves admit have had little engagement on social media, and nonexistent impact offline – supposedly represent a very serious threat to the US.

FAIR (3/9/17, 11/29/17, 4/9/20) has repeatedly pointed out how governments like to decry “fake news” or “disinformation” to discredit sources of unfavorable information, or to use those nebulous accusations as a cynical pretext to outright censor perspectives they dislike. Corporate media reports of “bots” or fake social media accounts alleged to be from foreign governments (like Russia) that Washington dislikes are oftentimes themselves fake news (FAIR.org, 4/5/18).

Here are a few of the latest reports:

The CNN story (9/8/21) described a “new report” from cybersecurity firm Mandiant and “experts at Google,” claiming that a

pro-Chinese government online influence operation is targeting Americans in an effort to exploit divisions over the Covid-19 pandemic and “physically mobilize protestors in the US in response.”

CNN made it sound as if this supposed operation has a truly impressive scope and outreach:

The operation, which initially attempted to discredit pro-democracy protests in Hong Kong in 2019, has expanded into a “global campaign that’s operating in seven languages, on at least 30 social media platforms and across 40+ website & forums,” experts at Mandiant and Google say, noting parallels to the Russian disinformation campaign around the 2016 presidential election.

A misinformation campaign on social media in support of Chinese government interests has expanded to new languages and platforms, and it even tried to get people to show up to protests in the United States…. This expansion suggests Chinese interests have made a deeper commitment to the sort of international propaganda techniques Russia has used for several years, experts said.

The Independent (9/9/21) depicted a sinister internet army of Chinese propagandists trying to deceive Americans and impact US politics:

Experts are seeing an “explosion of activity” by a pro-China group to mobilize physical protests in the US and spread disinformation, according to a report…. The campaign has now reportedly expanded its mission and spread from Twitter, Facebook and Google to “thousands of handles on dozens of sites around the world.”

The Wall Street Journal (9/8/21) propagated perhaps the most sensationalist innuendo:

A network of fake social-media accounts linked to the Chinese government has attempted to draw Americans out to real-world protests against anti-Asian-American racism and popular but unsubstantiated allegations that China engineered the virus that caused the Covid-19 pandemic, according to US security firms. The Independent (9/9/21) used a photo of people carrying Chinese flags in China to illustrate a story about Twitter accounts that “did not appear to achieve any success” in encouraging people to attend a protest in the US.

Some questions should spring to mind when reading these innuendo-filled reports of a supposed Chinese disinformation campaign. Perhaps the most important one: Is there evidence the Chinese government is behind this? As one reads further into these reports, one quickly discovers there is no such evidence. The source of the report, Mandiant, doesn’t even attribute responsibility for this supposed Chinese disinformation to the Chinese government.

Reuters ironically implied that this supposed disinformation campaign, because it echoed claims made by Chinese state media, might be evidence the Chinese government is behind this. It cited evidence-free claims from Chinese media, such as the charge that the Covid-19 pandemic might have originated from the US’s Fort Detrick:

Many of the posts echo claims in state-controlled Chinese media, and they are consistent with other government propaganda efforts. The researchers do not have proof of involvement by a specific arm or ally of Beijing. The Chinese embassy in Washington did not respond to a request for comment.

This argument is especially funny coming from Reuters, as the Grayzone (2/20/21) exposed them and the BBC as participants in a covert information warfare campaign aimed at “countering Russia” by effecting “attitudinal change,” in an effort to “weaken the Russian state’s influence.”

There is no evidence the pandemic originated from the Wuhan Institute of Virology, either, so by Reuters’s own logic, Americans spouting baseless speculations on social media that the pandemic originated from the Wuhan lab would count as a US disinformation campaign, since it’s being promoted by the US government and media (FAIR.org, 6/28/21; MintPress News, 9/15/21; 9/29/21). Reuters (9/8/21) used a blurry photo of Chinese President Xi Jinping, although the report its story is based on does not claim to have evidence that the Chinese government is behind the social media campaign.

The Journal reported speculation from the vice president of analysis at Mandiant, John Hultquist—”In addition to aligning with China’s strategic interests, the campaign appears to involve ‘significant resources, based on the growing scale of this operation,’ Mr. Hultquist said”—even as it noted that the report itself doesn’t offer proof the Chinese government is behind it, when Beijing denied responsibility. Such reports are tantamount to accusing the Chinese government of lying without any proof.

CNN implied that anonymous US officials believing something constitutes evidence:

US officials believe the operation is linked to the Chinese government and have been monitoring its evolution, according to one source familiar with the situation.

The cable channel even cited previous evidence-free allegations from US officials, laundered by Western media outlets like the New York Times (7/24/20), BBC (8/8/20), Reuters (8/9/20) and Fox (10/13/20), that China was trying to meddle in the 2020 election. The fact that, according to US intelligence agencies (Business Insider, 3/16/21), China did not in fact intervene in the election seemed to be offered by CNN as evidence that it could have if it wanted to:

During the 2020 election, US officials were watching to see if the operation might be used to spread disinformation, but ultimately assessed that the Chinese government avoided doing so because it did not want to provoke a response, the source added.

FAIR (7/3/20) has repeatedly pointed out that anonymous officials are notoriously unreliable sources who often lie or make unproven claims, with the most recent example making headlines being the evidence-free “Havana Syndrome” (FAIR.org, 12/16/20). Ironically, one could argue that the CNN report provided more evidence that CNN was operating as a US government propaganda agent—because it plainly gives credence to evidence-free statements from anonymous US officials—than it offered for the supposed disinformation campaign being linked to the Chinese government. 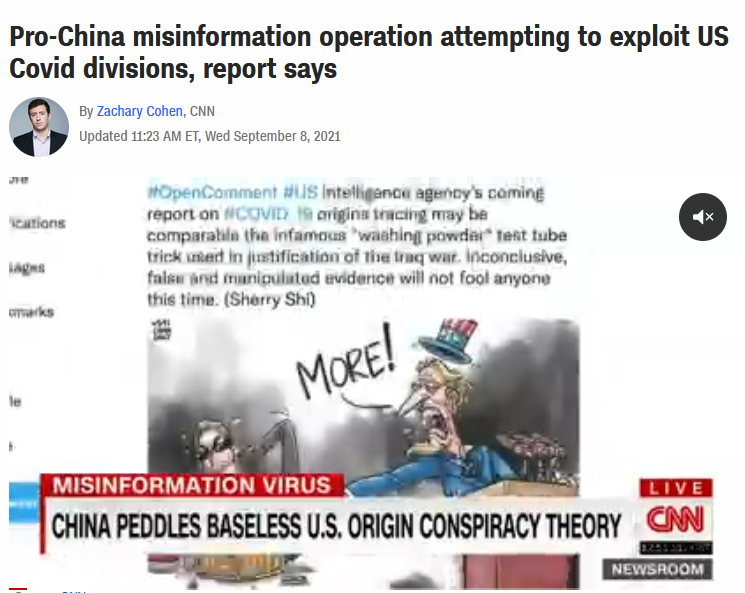 Though equally evidence-free, the accusation that Covid escaped from a Chinese lab will not receive the “baseless…conspiracy theory” label from CNN (9/8/21).

Yet another question one could ask is whether this alleged disinformation campaign had any significant impact on US politics offline. But when one reads these reports, one quickly discovers that not only did it have little effect on real life, it had almost no online engagement. Why are Western media spreading sensationalist innuendo when their own source, Mandiant, admits the program it claims to have uncovered had virtually no effect online or offline? CNN noted that the Mandiant report acknowledged

while this attempt did not appear to achieve any success, we believe it is critical that observers continue to monitor for such attempts in case greater degrees of organic engagement are later realized by the network.

So far, the accounts on the main US platforms and major networks elsewhere, such as Russia-based VKontakte, have gained little interaction with authentic users, the researchers said.

“A lot of it is tweeting into the void,” said John Hultquist, vice president of intelligence analysis at FireEye… “It’s almost like they are being paid by volume,” instead of engagement, said Shane Huntley, director of the threat analysis group at Google. 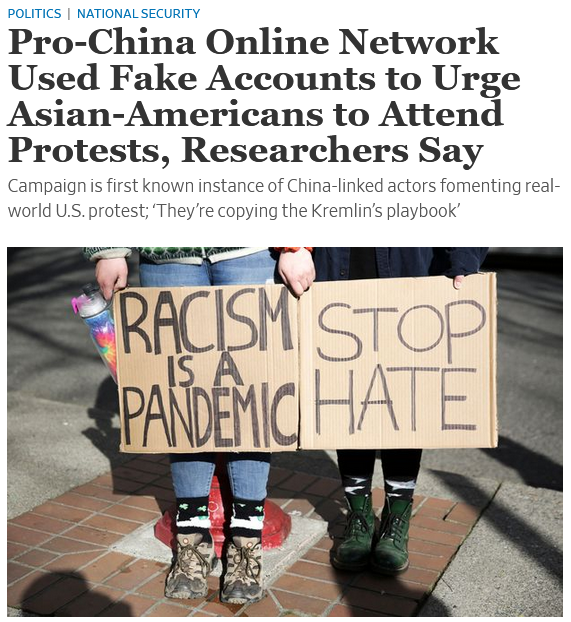 The Wall Street Journal (9/8/21) accompanied a story about protests that “appear not to have taken place” with a photo of actual anti-racism protests.

Reports and headlines imply that Asian-Americans have been attending multiple anti-racism protests because of this disinformation campaign. Reuters claimed that this “misinformation campaign on social media in support of the Chinese government” tried to “get people to show up to protests in the United States.”

However, when one reads the actual Mandiant report, it cites only one instance of this supposed incitement to attend a protest on April 24 this year in New York City, and it wasn’t even successful at that. Yet reports managed to turn the only example in the Mandiant report into several in their audience’s imagination by implying there were others cited, as they reported: “In one example, the network encouraged Asian Americans to show up to a protest on April 24 in New York City,” the Journal reported, while CNN had:

In April, for example, experts saw thousands of fake accounts calling on Asian-Americans to protest racial injustice in the US, and “disinformation about the virus’ origins.”

Reports like these can potentially serve to discredit all anti-racist protests by Asian Americans as merely being duped by “Chinese propaganda.”

FAIR (4/5/18) has previously reported how corporate media have been spreading evidence-free claims of “Russian bots” on social media like Twitter trying to “sow discord” or “exploit tensions,” even as their own primary source for those claims acknowledged they were “overdone.” A lot of these stories were described as “total bullshit” in a report interviewing the primary source for those claims, Hamilton 68, because not all bots are in Russia (many are based in the US), and journalists might just be confusing people genuinely passionate about promoting Russia with fake accounts. Twitter is already clogged with bots, which makes it extremely difficult to tell which accounts are inauthentic, let alone whether they’re under the command of the Russian government.

The eerily familiar evidence-free narrative about this supposed Chinese disinformation campaign might lead the most cynical people to conclude these almost formulaic reports will be used as a pretext for American social media companies like Twitter to ban accounts on behalf of the US government that echo claims made by the Chinese government and media, regardless of whether they’re fake or not. Journalists and FAIR contributors like Alan MacLeod and Ben Norton have reported how giant American social media companies like Twitter and Reddit already have executives from Western governments, and how these companies have already acted to censor foreign perspectives that challenge narratives and disinformation from the US government under the pretext of combating foreign disinformation.