Following continuous massive protests by the organized Bolivian people in defence of their right to elect a president and government of their choosing, the elections, postponed three times, will finally take place on October 18. END_OF_DOCUMENT_TOKEN_TO_BE_REPLACED

The battle for democracy in Bolivia

(July 25) – Workers, women, and Indigenous peoples and their organizations along with other social movements have returned to the streets to demand an end to the wrecking of the coup government and the right to elect a president and government of their choosing without further delay. Demonstrations are being held especially in places where the workers have fighting traditions, such as Cochabamba and El Alto, a suburb of the capital city of La Paz. END_OF_DOCUMENT_TOKEN_TO_BE_REPLACED

Interview with Evo Morales: Bolivia under dictatorship, US the real power 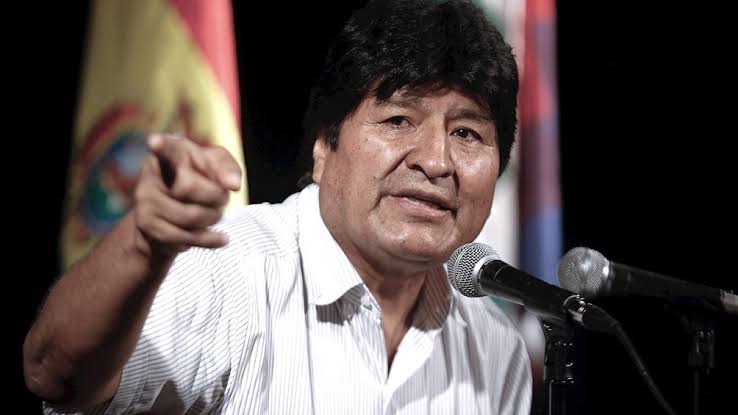 A little more than six months after the coup d’état (10-11 November 2019) against President Evo Morales in Bolivia, now exiled in Argentina, he warned of the serious situation his country is facing under a de facto government headed by the self-proclaimed President Jeanine Añez, who in addition to repression involving massacres against the population and persecution and imprisonment of political leaders and militants, is systematically destroying the social and economic model and achievements of the overthrown government of the Movement Towards Socialism (MAS). END_OF_DOCUMENT_TOKEN_TO_BE_REPLACED

What are the real interests of the U.S. and corporations in the region? Freedom, democracy, human rights? No. Their goal is to preserve imperialist domination of our natural resources| ENRIQUE MORENO GIMERANEZ

Our America is again suffering escalating aggression by U.S. imperialism and local oligarchies. The region is experiencing a sad reality involving dangerous turmoil and socio-political instability, promoted by Washington. END_OF_DOCUMENT_TOKEN_TO_BE_REPLACED

Four-phase Montevideo mechanism for  peace and dialogue in Venezuela

Delegations of Mexico, Uruguay and CARICOM in Montevideo, February 6, 2019.

Venezuelan President Nicolás Maduro on February 6 gave “absolute support” to a four-phase plan designed by the countries of the Caribbean organized in CARICOM, along with Mexico and Uruguay, for Peace and Dialogue in Venezuela titled the Montevideo Mechanism. On February 7 a meeting was held in Montevideo co-hosted by Uruguay and the European Union and attended by representatives of eight European Union member states (France, Germany, Italy, The Netherlands, Portugal, Spain, Sweden and the United Kingdom) as well as Costa Rica, Bolivia and Ecuador, reported to be members of an EU-initiated International Contact Group (ICG) on Venezuela. The aim of the meeting was said to be to explore ways and means of fostering a negotiated, political settlement to the crisis in Venezuela without the use of force. END_OF_DOCUMENT_TOKEN_TO_BE_REPLACED

Filed under Americas, No Harbour for War (Halifax)

Fitting replies to US president

Jorge Arreaza, Foreign Minister of the Bolivarian Republic of Venezuela, replied to Trump’s speech at a September 19 press conference: “The United States Government is in complete violation of all the principles of the UN Charter.” Venezuela is a country of peace and no country can or has the right to violate Venezuela’s sovereignty, he said. “We do not accept threats from President Trump, we are a people of peace and what we want are relations of mutual respect, not only with the United States, but with all the countries of the world,” he added. END_OF_DOCUMENT_TOKEN_TO_BE_REPLACED

Evo Morales: We will continue governing in the interest of the poor and marginalized

The Bolivian government promised its supporters Wednesday February 24 that it would continue to adopt progressive political policies, despite the outcome of the country’s national referendum. END_OF_DOCUMENT_TOKEN_TO_BE_REPLACED

END_OF_DOCUMENT_TOKEN_TO_BE_REPLACED

The CIA in Latin America: From coups to torture and preemptive killings

(Jan. 22) – The observations made by the Venezuelan journalist José Vicente Rangel are generally regarded as well informed and accurate. For the television program Los Confidenciales («Reliable Sources») he recently reported on the work of the supplemental staff at CIA stations in Latin America. According to Rangel, at least 500 reinforcements have arrived at the US Embassy and other US headquarters in South America in order to help the other operatives escalate their subversive and espionage activities.

END_OF_DOCUMENT_TOKEN_TO_BE_REPLACED

Oil and the US empire

Oil has become a strategic resource in the modern world. Oil is necessary for industrial mass production, transportation and warfare.

A human-centred outlook towards oil regards the resource as necessary for mutual development of all peoples to a modern standard wherein all nations are regarded as equal without reference to size or development, where the rights of all peoples are affirmed and force is not used to settle conflicts amongst nations, and the short and long term consequences of the use of oil on the social and natural environments are important considerations in nation- building.
END_OF_DOCUMENT_TOKEN_TO_BE_REPLACED

Bolivian President, Evo Morales, stated on October 22, that indigenous people are prepared to govern, despite what neoliberal politicians have said for many years.

Morales, who participated in the inauguration of irrigation projects in Ocuri, in the north of Potosí, stated that in the past it was said that indigenous people were only good for voting and not governing. END_OF_DOCUMENT_TOKEN_TO_BE_REPLACED

I have no regreats – in fact, I am pleased to have expelled the US ambassador, the DEA and to have closed the US military base in Bolivia. Now, without a US ambassador, there is less conspiracy, and more political stability and social stability. Without the IMF we are better off economically – Evo Morales, the president of Bolivia END_OF_DOCUMENT_TOKEN_TO_BE_REPLACED

Morales: This win is a triumph for anti-imperialists and anti-colonialists

In what is being claimed as a victory for “anti-imperialists,” President Evo Morales on Sunday was elected to his third term as Bolivia’s president.

Morales, who in 2006 became the country’s first indigenous leader, won a landslide 61 per cent of the vote, according to exit polling. His closest rival, businessman Samuel Doria Medina, had 24 per cent. Medina was Bolivia’s Minister for Coordination and Planning in 1991-1993 when the country privatized many state institutions for below market prices. END_OF_DOCUMENT_TOKEN_TO_BE_REPLACED

Criminal states should be blocked and isolated, as Zionist Israel maneouvres to insinuate itself into the Americas

(July 30) – Bolivia has declared Israel a “terrorist state” and revoked a visa exemption agreement with Tel Aviv in protest at the ongoing Israeli attacks on the besieged Gaza Strip.

The move “means, in other words, we are declaring (Israel) a terrorist state,” President Evo Morales said during talks with a group of educators in the Andean city of Cochabamba on Wednesday.

Morales added that the Israeli aggression shows “that Israel is not a guarantor of the principles of respect for life and the elementary precepts of rights that govern the peaceful and harmonious coexistence of our international community.” END_OF_DOCUMENT_TOKEN_TO_BE_REPLACED

“I would like to announce that we are preparing a lawsuit against Barack Obama to condemn him for crimes against humanity,” President Morales said at a press conference in the Bolivian city of Santa Cruz. He branded the US president as a “criminal” who violates international law. END_OF_DOCUMENT_TOKEN_TO_BE_REPLACED

U.S. interferes with right of Venezuelan Presidential aircraft to fly over Puerto Rico

THE Communist Party of Canada (Marxist-Leninist) condemns the recent attempt of the U.S. imperialists to once again interfere with the right of the president of a sovereign nation to free passage in the skies. This time, the U.S. took on Venezuelan President Nicolas Maduro and the Executive Branch of the Venezuelan government. END_OF_DOCUMENT_TOKEN_TO_BE_REPLACED

Condemn the acts of piracy against Bolivian president Evo Morales!

Hooliganism in international relations must not pass!

Statement by the Communist Party of Canada (Marxist-Leninist), July 4, 2013

The Communist Party of Canada (Marxist-Leninist) denounces the refusal of Italy, France, Spain and Portugal to permit the Bolivian presidential aircraft to land or fly over their territories on July 2. President Evo Morales was returning from Russia where he attended the second summit of the Gas Exporting Countries Forum. Short of fuel, the plane was forced to land in Vienna, Austria where it was boarded and searched, using the pretext that the plane could be transporting the former CIA agent, Edward Snowden. The U.S. government has issued a warrant for Snowden’s arrest after the leak of top secret information. END_OF_DOCUMENT_TOKEN_TO_BE_REPLACED

Why is Israel attending an OAS Summit?

(May 31, 2009) – ISRAEL, which is gradually losing the support it enjoyed in the EU and the U.S., is planning to develop an overt and covert presence in Latin America to counter Iran’s growing ties in the region. Readers may remember its unsavoury role in arming and training the bloody security forces of the Central American oligarchy during the 1970s and 1980s, which was exposed in the Contra scandal during the Reagan administration. END_OF_DOCUMENT_TOKEN_TO_BE_REPLACED