The House of Commons Standing Committee on Natural Resources said in its June 2021 report entitled From Mineral Exploration to Advanced Manufacturing Developing Value Chains for Critical Minerals in Canada that:

“Critical minerals are essential components of many new technologies, from low-greenhouse gas energy sources to electric vehicles to advances in cutting-edge sectors such as medicine, electronics, aerospace and defence.”

END_OF_DOCUMENT_TOKEN_TO_BE_REPLACED

Integration of Quebec’s northern regions into US war economy

TML Weekly explained in February how Canada and Quebec are being further integrated into the U.S. imperialist economy and war machine through the Canada-U.S. Joint Action Plan on Critical Minerals Collaboration.[1] A recent Quebec government announcement reveals that the next step is to build infrastructure to guarantee a supply chain to ship these critical minerals to the United States. END_OF_DOCUMENT_TOKEN_TO_BE_REPLACED

Heroic resistance in Honduras: Ten years after the 2009 coup d’état

June 28 will mark ten years since the democratically elected president of Honduras, Manuel Zelaya, was kidnapped and forcibly removed from office and from Honduras in a U.S.-orchestrated military coup d’état. Zelaya has said the main impetus for the coup was his government signing on to the Bolivarian Alliance for the Peoples of our America (ALBA) in 2008 — something the U.S. could not tolerate. END_OF_DOCUMENT_TOKEN_TO_BE_REPLACED

Canada has deployed two warships, HMCS Kingston and HMCS Shawinigan, to West Africa  – “to work with partners & allies to enhance maritime security + stability” in the Gulf of Guinea,” in the words of Vice Admiral Ron Lloyd. Maritime Forces Atlantic (MARLANT) stated the aim of “#OpPROJECTION West Africa today, is to work with African nations to build partner capacity, promote maritime security, and foster relationships in the region.” None of this has to do with the defence of Canada. END_OF_DOCUMENT_TOKEN_TO_BE_REPLACED

This article provides a long list of mining activists who resisted Canadian mining projects in Latin America, Africa, the Philippines and India, and ended up being assassinated. RACHEL SMALL

Four days after the assassination of Honduran indigenous leader Berta Cáceres captured worldwide headlines, a vigil to remind of the blood on Canada’s hands for all those who have died protesting Canadian mining projects abroad interrupted the mining industry’s annual confab in Toronto on Sunday, March 6. END_OF_DOCUMENT_TOKEN_TO_BE_REPLACED 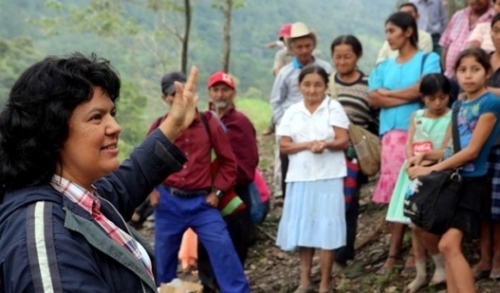 The Communist Party of Canada (Marxist-Leninist) condemns the assassination of Honduran Indigenous rights activist Berta Cáceres. Cáceres, co-founder of the Civic Council of Popular and Indigenous Organizations of Honduras (COPINH) was shot by gunmen who broke into her home in the early morning hours of March 3. A tireless fighter for the rights of the peoples, she was a leader of the Lenca people of the Rio Blanco area of Honduras. Most recently, she was leading the fight against the Honduran government’s violation of Indigenous title and in favour of the requirement to obtain the free, prior and informed consent of Indigenous peoples for any proposed new hydroelectric projects on their territories. END_OF_DOCUMENT_TOKEN_TO_BE_REPLACED

Demands are growing for Canadian mining monopolies to be held to account for their actions in Canada and abroad. These include the world’s largest gold monopoly, Barrick Gold, whose founder Peter Munk is the benefactor and namesake of the Munk Debate on foreign policy held last night. This important issue of Canada’s foreign policy was conspicuously absent from the debate. END_OF_DOCUMENT_TOKEN_TO_BE_REPLACED

First of four articles on Canada, the NATO Fleet and Africa

HALIFAX (August 1, 2007) – IN THE MIDST of the 200th anniversary of the “abolition” of the slave trade, and on the heels of the UN decision to deploy 12,000 troops to Darfur, the Government of Canada despatched the warship HMCS Toronto to participate in an unprecedented two-month NATO fleet circumnavigation around Africa. The warship departed from Halifax on July 20 in the midst of a localized media blitz. As a form of psychological pressure, the two daily newspapers were replete with articles over a two-day period depicting the emotional good byes of the families of the departing sailors. The media forgot to inform the families that the deployment is part of the expansion of the aggressive NATO bloc into a self-appointed global police force. END_OF_DOCUMENT_TOKEN_TO_BE_REPLACED

The Westray mine disaster

THE WESTRAY MINE in Pictou County is situated in North Central Nova Scotia where there are numerous coal seams, one of which in the Foord seam – the thickest – and mined by Westray. Yet it is also one of the most dangerous to mine by underground means anywhere in North America. The geology of this area means underground mining is always fraught with dangers from methane gas and instability, even more than is usual in mining. END_OF_DOCUMENT_TOKEN_TO_BE_REPLACED