Aberration of due process in Nova Scotia

Four British naval personnel accused of a heinous crime have been moved from CFB Stadacona in Halifax to British base in Alberta. The Harper government, its Department of National Defence and Maritime Command are making special private arrangements for the British soldiers, and the courts and the crown in Halifax are letting them get away with it.

News agencies report that on May 1st the head of Maritime Command of the Canadian Forces ordered four British Royal Navy sailors – accused of sexual assault at a military barracks at CFB 12 Wing Shearwater – to leave the CFB Stadacona military base in Halifax, where they had resided since April 21, by the end of the day. With the sanction of the crown prosecutor’s office and a Nova Scotian provincial court, they were transferred to the British Army Training Unit in Suffield, Alberta (BATUS), which is leased from the Canadian Department of National Defence. [1] How the soldiers were transferred from one end of the country virtually to the other has not been revealed. END_OF_DOCUMENT_TOKEN_TO_BE_REPLACED

5,000 British Army troops to take part in exercises in Canada 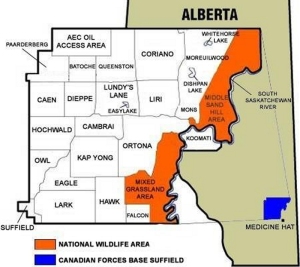 (April 26) – The Medicine Hat News reports that the first of four British Army major training operations at CFB Suffield in Alberta will commence in late May.

About 5,000 British Army troops will arrive to take part in four major exercises scheduled for this year the first under a renewed operating agreement announced on November 4, 2013. END_OF_DOCUMENT_TOKEN_TO_BE_REPLACED

CFB Suffield: Britain to train thousands of troops in Canada

The CFB Suffield announcement was made as “business as usual” to keep Canadians unaware of the extent to which the territory of Canada is being consistently used by the NATO powers – the USA in the first place, which considers Canada to be its front yard – to prepare war and even as a launch pad for intervention against other nations and peoples.

WHERE does the British Army send its troops to train for war when it has been kicked out of a North African country asserting its independence and sovereignty?

Which country then allows the British Army to use its territory to wage war against an independent and sovereign country in Latin America?

And which country recently changed all the names of its armed forces units to re-incorporate the word “Royal”? Started to share its embassies? Grovels before its queen?

The Right answer is Canada and for all the wrong reasons. END_OF_DOCUMENT_TOKEN_TO_BE_REPLACED