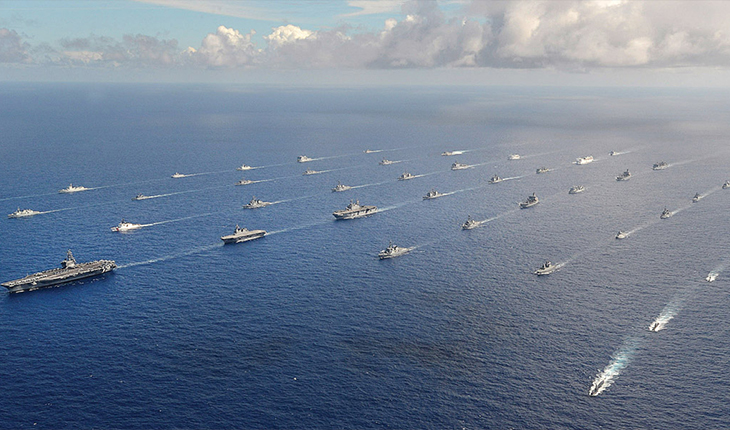 BERLIN/WASHINGTON (June 19) – NATO should systematically expand its military exercises and operations into the Asia-Pacific region, an expert of Washington’s Atlantic Council think tank proposes in the intensifying debate on the posture the western war alliance should assume in relationship to the People’s Republic of China. China’s “presence in the Arctic, in Africa and in the Mediterranean” calls for a response, according to NATO Secretary General Jens Stoltenberg. END_OF_DOCUMENT_TOKEN_TO_BE_REPLACED

An Army of the Europeans

BERLIN (german-foreign-policy.com) – The program of the Berlin Security Conference, which ended yesterday, included discussions on new steps toward creating an “army of the Europeans,” concerns over the possible erosion of the West’s “margin in defence capabilities” vis à vis Russia and China, as well as the role of artificial intelligence in future wars. Unlike the Munich Security Conference, this conference is not oriented on foreign policy but specifically on military policy and the arms industry, with more than a thousand military and business representatives, state officials, and politicians participating. END_OF_DOCUMENT_TOKEN_TO_BE_REPLACED

The murky origins of the annual US-led Halifax war conference

Part 2 of a series by Tony Seed written for the Nova Scotia Advocate.

This year marks the 10th annual rally against the U.S.-led Halifax war conference, the Halifax International Security Forum (HISF) on November 16-18, held in the context of the centenary of the ending of the First World War and the world “peace forum” of the big powers in Paris. For the 10th year Haligonians are organizing against it and advancing their demands based on No Harbour for War, Canada Out of NATO, Make Canada a Zone of Peace and for an anti-war government.

This “forum,” involving high-profile generals, admirals, defence ministers, ideologues and corporate executives from the NATO bloc, will discuss “issues of international security.” According to the Department of Defence, which has doled out some $30 million tax dollars to the U.S. organizers since 2009, the aim of the “discussion” is to “learn from each other, share opinions, generate new ideas, and put them into action” (emphasis added). Topics such as “100 Years On: Are We Tired of Winning?,” and “Beijing’s Cravings, Kremlin’s Gremlins: Freedom’s Foes.” are a telling implication of the real agenda. END_OF_DOCUMENT_TOKEN_TO_BE_REPLACED

In the context of the offensive of the Trump regime against Iran and for domination of West Asia (Middle East), the CIA released on November 1 a “never-before-seen 19-page document,” as well as a 228-page “journal” ostensibly written by Osama Bin Laden as all U.S. and Canadian media (as directed by the U.S. government) are promoting. END_OF_DOCUMENT_TOKEN_TO_BE_REPLACED

The travels of NATO Chief Jens Stoltenberg: An analysis

An exposé on the expansionist agenda of NATO which shows no intention of slowing down! | FILIP KOVACEVIC*

We travel to people and places important to us. If somebody looked at our travel itineraries over time, it would not be difficult to discover our priorities, our likes and dislikes, our beliefs and fears, the general pattern of how we live our lives and what we think about. END_OF_DOCUMENT_TOKEN_TO_BE_REPLACED 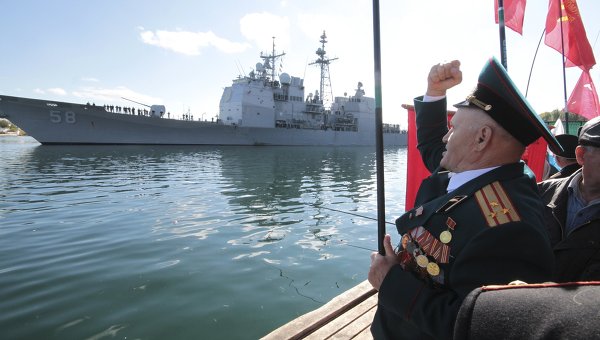 Ukrainians including veterans protest “visit” of USS Vella Gulf, a Ticonderoga class guided missile cruiser, at the Black Sea port of Sevastopol in January 2012. Their slogans included “Yankee, go home!” and “No to NATO!” The protesters also burned a U.S. flag featuring Nazi swastika instead of stars. Yevhen Dubovik, a protest organizer, said the visit of a ship with offensive weapons was illegal because it had not been authorized by Ukraine’s parliament.

Following the overthrow of the government by an armed coup d’état, the goal of turning Ukraine into NATO territory complete with US military bases tops the agenda under the anti-Russian flag. This has been a consistent thrust of all governments since 1999, of both Yushchenko and Yanukovych, in the context of broad resistance by the people of Ukraine to the imperialist project.

In July 2008, anti-NATO protestors moved ten boats into positions blocking the exits from the port of Odessa, preventing NATO ships from participating in the Sea Breeze 2008 exercise. According to their statement, “The NATO drill in Odessa is being accompanied by numerous protests by local residents. This demonstrates the public mood in Ukraine over the government’s course toward early admission to the alliance.” A branch of the Ukrainian Communist Party in Donetsk said over 1,000 people had taken part in anti-NATO rallies in the Donetsk Region in eastern Ukraine. In 2006, protests forced U.S. Marine reservists who came to prepare for the exercises to leave without carrying out their mission.

The extent of the anti-NATO resistance amongst Ukrainians was so broad that it could not be dismissed as something “ethnic” or “communistic.” END_OF_DOCUMENT_TOKEN_TO_BE_REPLACED

For your information: About the Halifax International Security Forum

THE Halifax War Conference, aka the Halifax International Security Forum, held its first meeting in November 2009. The conference was part and parcel of the NATO aggressive military alliance to reconfigure itself with a “new security doctrine” to replace that of “humanitarian intervention” introduced during the 1999 aggression against Yugoslavia and the first absorption into NATO of states of the former Soviet bloc.

In a statement issued to oppose the first conference in 2009, CPC(M-L) pointed out:

“The demand for this ‘new doctrine’ is impelled by the crisis of NATO itself. After eight years of occupation of Afghanistan under the pretext of opposing terrorism, NATO has been unable to quell the important resistance of the Afghan people. The people of Afghanistan refuse to accept NATO’s ‘international security assistance’ and the peoples of NATO’s member countries have not been convinced of the nobility of the war or NATO’s present course and its raison d’être.”

The current website of the Halifax War Conference describes its history as follows: END_OF_DOCUMENT_TOKEN_TO_BE_REPLACED

What is the HISF, why you shouldn’t like it, and how you can protest it

HALIFAX (November 4, 2010) – WITH the number of ghouls, goblins and ghastlies descending upon Halifax this weekend, you might be excused if you thought Halloween was a weekend late. But unlike All Hallows eve, those aren’t masks, the blood is real, and there is no candy. Only really nasty tricks. That’s right folks, lace up your boots, and get your placards and peace chants ready, because the 2nd Annual Halifax International Security Forum is coming to town! END_OF_DOCUMENT_TOKEN_TO_BE_REPLACED 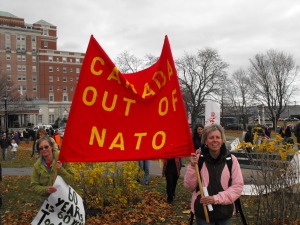 THIS indepth article by RICK ROZOFF of STOP NATO elaborates the most important features of the imperial agenda of the Obama Administration, particularly its so-called new security doctrine, to be adopted at the upcoming NATO Summit in Lisbon, Portugal, November 17-19. Along with profiling the imperialist cadre behind NATO in the USA and their links, it also deals with the retasking of the NATO bloc on a global basis, in which the Harper government is embroiling the Canadian people. It is published as background information on the Halifax International Security Forum, organized by the German Marshall Fund of Washington, which is interlinked with the Atlantic Council of NATO, and wholly funded by the Canadian Department of National Defence and the Atlantic Canada Opportunities Agency.

END_OF_DOCUMENT_TOKEN_TO_BE_REPLACED

TML calls on everyone to support and participate in the actions to oppose the Second Halifax International Security Forum (HISF) to be held at the Westin Hotel from November 5-7. Last year’s inaugural event at the same Halifax hotel was opposed by many groups across the Maritimes. END_OF_DOCUMENT_TOKEN_TO_BE_REPLACED

Halifax War Conference: Warmongers are not welcome in Halifax

All Out to Oppose the Second Annual Halifax International Security Forum

The inaugural Halifax International Security Forum, co-sponsored by the Canadian government and the German Marshall Fund, highlighted Canada’s more militant role with NATO. ANTHONY FENTON of IPS reports on the gathering of the world’s top military elites inside a fortified hotel in Halifax to discuss NATO’s future at “what is being dubbed a World Economic Forum-style conference.” On the other hand, Haligonians condemned the organisation’s legitimacy, secrecy, and the lack of democratic debate about the increasingly unpopular war in Afghanistan. “Most of the Forum’s agenda is off-the-record and closed to the media.” END_OF_DOCUMENT_TOKEN_TO_BE_REPLACED

HALIFAX (November 21, 2009) – ABOUT 200 protesters gathered in a park outside an international military conference in Halifax today to demand that Canada withdraw from Afghanistan and from NATO, the trans-Atlantic alliance that is waging war in Afghanistan. One demonstrator carried a sign reading “60 years is 60 years Too Long” referring to Canada’s membership in the North Atlantic Treaty Organization, the U.S.-led military alliance formed in 1949. END_OF_DOCUMENT_TOKEN_TO_BE_REPLACED

On November 20 and 21, an ad hoc committee of Haligonians and anti-war groups is holding public protests at the Westin Hotel to oppose the inaugural Halifax International Security Forum which they bluntly term the “Halifax War Conference.” They plan a mass picket at its opening on Friday afternoon at 2:30 pm and an anti war rally on Saturday at Cornwallis Park at 1:00 pm. END_OF_DOCUMENT_TOKEN_TO_BE_REPLACED

All out to oppose ‘Halifax International Security Forum’! No Harbour for War! 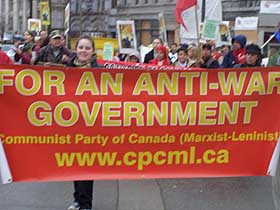 The Communist Party of Canada (Marxist-Leninist) calls on all the peace-loving and anti-war forces of Halifax and the entire region – workers, youth, students and women – to go into action to oppose the so-called Halifax International Security Forum. Organized by the Canadian Department of National Defence and the German Marshall Fund of the United States, the Forum will be held from November 20-22 at the Westin Hotel in Halifax. The official website of the conference states that although “serious conferences about regional and global security have traditionally been held outside of the United States and Canada … [t]oday’s new dangers require new thinking and new solutions, and the Halifax International Security Forum is the new venue to explore serious policy alternatives.” END_OF_DOCUMENT_TOKEN_TO_BE_REPLACED

Filed under Atlantic Gateway / Atlantica, No Harbour for War (Halifax)

All out to oppose the ‘Halifax International Security Forum’!

Call of the Nova Scotia Committee of the Marxist-Leninist Party of Canada, 4 October 2009

FROM NOVEMBER 20-22, the Canadian Department of National Defence and the US-based German Marshall Fund are convening the “Halifax International Security Forum” at the Westin Hotel in Halifax. We call on all the peace-loving and anti-war forces of this city and the entire region – workers, youth, students and women – to go into action to oppose this event and the dangerous preparations for imperialist war, which it serves. END_OF_DOCUMENT_TOKEN_TO_BE_REPLACED

Filed under Atlantic Gateway / Atlantica, No Harbour for War (Halifax)

All out to oppose the Halifax War Conference!