Ground Zero: Richmond Street in the North End of Halifax.

1. The decontextualization of history

The Sixth of December is the 103rd anniversary of the horrific Halifax Explosion of 1917 – the largest explosion in history before the barbaric devastation of Hiroshima and Nagasaki by U.S. atomic bombs in 1945. Some 1,963 innocent men, women and children or more were massacred, another 9,000 injured and 199 blinded, according to understated official figures. Despite scores of books, exhibits, radio and TV programs, and memorial meetings much is unknown, covered up or falsified while those responsible – the Royal Navy, the United States and the Borden government in the first place – were given impunity for a war crime.

We are reposting a recent article by journalist Susanne Rent from the Halifax Examiner to bring to the attention of a wider audience the poignant story of Dr Clement Ligoure and his selfless humanitarianism. Reporting on the research of well-known playwright David Woods, Ms Rent asks, “I’m sure many of us know about the heroics of Vince Coleman, the train dispatcher who sent a message stopping a train that was heading to the city, and then died in the explosion. But how many of us have heard the name Dr. Clement Ligoure and stories of his heroics?” END_OF_DOCUMENT_TOKEN_TO_BE_REPLACED 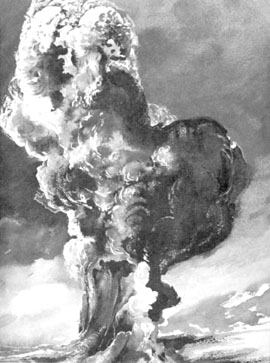 The 75th Anniversary of the dropping of an atomic bomb on Hiroshima on the Sixth of August 1945 is a historic universal event with profound immediate significance to present international relations, the danger of war and even nuclear war. For Haligonians, the nuclear devastation of Hiroshima and Nagasaki has a special meaning ,which is even more poignant in the wake of the hugely destructive explosion in  Beirut, Lebanon on August 4. END_OF_DOCUMENT_TOKEN_TO_BE_REPLACED

102nd Anniversary of the Halifax Explosion

December 6th is the 102nd anniversary of the horrific Halifax Explosion of 1917 – the largest explosion in history before the infamous devastation of Hiroshima and Nagasaki by U.S. atomic bombs in 1945.[1] Some 1,963 innocent men, women and children were massacred, another 9,000 injured and 199 blinded, comprising more than one fifth of the total population, resulting from a massive explosion due to the collision in the inner harbour of the merchant ship Imo and the ammunition ship Mont Blanc loaded with 3,00 tons of chemical explosives. One square mile of the working class quarter of the North End facing the Halifax Narrows was totally destroyed. Six thousand people lost their homes altogether and between 20,000 and 25,000 Haligonians were left homeless and destitute, including ten thousand children. More than 1,600 buildings were destroyed, and 12,000 more were damaged.[2] END_OF_DOCUMENT_TOKEN_TO_BE_REPLACED

Message from No Harbour for War to the Canadian people

Warmest greetings from Halifax to all those protesting against NATO and the Halifax International Security Forum in Toronto and Windsor, Ontario. We salute all those across the land from coast to coast who are engaged in discussing this dangerous event and what to do. The cause of peace, one of the highest ideals of humanity, is a noble endeavour. Every day we see reaction on the offensive everywhere in the world. We wish you the greatest success. END_OF_DOCUMENT_TOKEN_TO_BE_REPLACED

Centenary of the Halifax Explosion: Time to disturb the sleep of the unjust

Act of God, the harbour pilot, the navy?

The Halifax Explosion and the Royal Canadian Navy: Inquiry and Intrigue

Filed under Canada, History, No Harbour for War (Halifax)

On the 100th anniversary of the Halifax Explosion, a war crime: The organization of the city as a war port is the ‘business’ best adapted for profit

December 6th is the centenary of the horrific Halifax Explosion of 1917 – the largest explosion in history before the infamous devastation of Hiroshima and Nagasaki by US atomic bombs in 1945. The tragedy is being marked by an intensive program of events and initiatives, including scores of books, exhibits, radio and TV programs, memorial meetings in Halifax and Boston, and a stamp issued by Canada Post.

The following article by Tony Seed reports on a paper presented by anti-war activists in Halifax in 1983 and expands on it for this publication. On this date, we pay our deepest respects to the families of all those who died as a result of this disaster. END_OF_DOCUMENT_TOKEN_TO_BE_REPLACED