Where is Canada’s backbone in standing up to the US on Cuba?

By JOHN KIRK and STEPHEN KIMBER*

In June 1996, mere months after the U.S. Congress passed the Helms-Burton Act to tighten the screws on Cuba’s economy, Canada became the first country to publicly say “no” to Washington’s plan.

Back then, Ottawa announced it would introduce new legislation to blunt the bully-boy impact of Title III – an extra-territorial section of that law that prohibits non-U.S. companies from “trafficking” in what the United States claims is American property confiscated after the 1959 Cuban revolution – and threatened to take the United States to international arbitration. END_OF_DOCUMENT_TOKEN_TO_BE_REPLACED 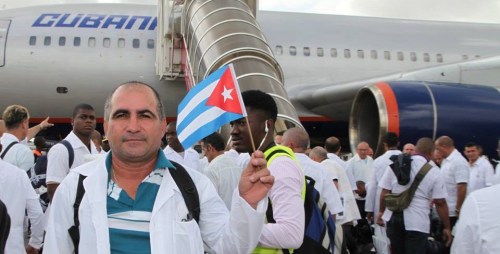 From May 14 to 30, Dr. José de Jesús Portilla García, a participant in various Cuban medical internationalist missions, will speak in several Canadian cities on Cuba’s Humanitarian Medical Mission in the West African nations of Liberia, Guinea and Sierra Leone.

Dr. Portilla García will raise awareness of Cuba’s extensive and unprecedented solidarity with the peoples of West Africa, which illustrates what can be achieved when self-serving interests do not direct the aid and assistance provided. END_OF_DOCUMENT_TOKEN_TO_BE_REPLACED 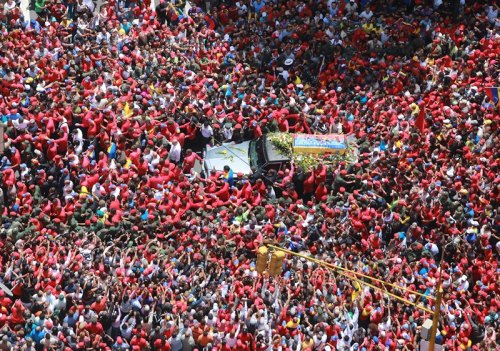 Millions of Venezuelans take to the streets to pay tribute to President Hugo Chávez, as his body is taken from the military hospital where he died to the National Military Academy to lie in state, March 6, 2013

CANADIAN progressive media has reflected extensively on the occasion of the death of the President of Venezuela, Hugo Chávez as part of the world expressions of grief and homage. Meanwhile, memorial tributes and tributes in his honour being held from coast to coast across the northern nation. END_OF_DOCUMENT_TOKEN_TO_BE_REPLACED

END_OF_DOCUMENT_TOKEN_TO_BE_REPLACED

Cuban medical aid to Haiti: One of the world’s best kept secrets

Cubans setting up the field hospital in Jacmel, Haiti, January 2010.

MEDIA COVERAGE of Cuban medical cooperation following the disastrous recent earthquake in Haiti was sparse indeed. International news reports usually described the Dominican Republic as being the first to provide assistance, while Fox News sang the praises of U.S. relief efforts in a report entitled “U.S. Spearheads Global Response to Haiti Earthquake” – a common theme of its extensive coverage. CNN also broadcast hundreds of reports, and in fact one focused on a Cuban doctor wearing a T-shirt with a large image of Che Guevara – and yet described him as a “Spanish doctor.” END_OF_DOCUMENT_TOKEN_TO_BE_REPLACED

Carlos Fernández De Cossío is Ambassador of the Republic of Cuba to Canada. This photo is from a meeting with the editorial board of Shunpiking magazine, 30 October 1999

Shunpiking magazine was honoured by a friendly and informative visit from Carlos Fernández de Cossío, Ambassador of the Republic of Cuba to Canada, on Saturday, October 30, 1999 during his four-day visit to Nova Scotia. Following a brief lunch, Ambassador Fernandez carried a lively two-hour discussion with editorial and production staff.

Shunpiking is Nova Scotia’s discovery magazine, and the third largest print media in the province. While the number of articles on international questions has been few, our editorial mandate involves not only Nova Scotians discovering our own province and region but also the world. Nova Scotia and the Maritimes share deep historical ties with Cuba and the Caribbean. [1] Thousands of Canadians have visited Cuba in the recent period and appreciate its indelible achievements. END_OF_DOCUMENT_TOKEN_TO_BE_REPLACED