The haphazard discovery of Roman ruins in Amman sparked questions about the fate of antiquities in the city’s downtown area amid calls for expanding the excavations | Mohammed Ersan, Al-Monitor

People watch as workers uncover the ruins of a recently discovered Roman archaeological site in the Jordanian capital, Amman, on Dec. 14, 2020. According to local media, the archaeological site was uncovered during works to install a water drainage system | KHALIL MAZRAAWI/afp/AFP via Getty Images.

AMMAN (December 27) — Jordanian authorities discovered on Dec. 12 antiquities dating back to the Roman era underneath the main street of downtown Amman, when they were excavating the area for installation of a water drainage system for flood control. END_OF_DOCUMENT_TOKEN_TO_BE_REPLACED

The morning after President Donald Trump committed to recognizing Israeli sovereignty over parts of the West Bank during the release of his much-awaited Middle East peace plan, Palestinians protested the deal that would annex the Jordan Valley, the breadbasket of their territory, by motoring trackers through an Israeli checkpoint. END_OF_DOCUMENT_TOKEN_TO_BE_REPLACED

Germany: A permanent base in the Middle East

BERLIN/BAGHDAD/AL AZRAQ (September 18) – Berlin is considering the establishment of a permanent Bundeswehr base in the Middle East, German Defence Minister Ursula von der Leyen said during her recent visits to Jordan and Iraq. German Armed Forces could be stationed at Jordan’s Al Azraq Airbase for an extended period in relative proximity to Iraq – similar to the US Persian Gulf bases. END_OF_DOCUMENT_TOKEN_TO_BE_REPLACED

Timber Sycamore was a classified weapons supply and training program run by the United States Central Intelligence Agency (CIA) and supported by various Arab intelligence services, most notably that of Saudi Arabia. The program is the proverbial tip of the iceberg. It is further evidence that the United States and/or any of its collaborators and accessories including the Canadian government, with its proxy support, training and arms programs in Kurdistan, Jordan, Israel and Saudi Arabia, are guilty of crimes against humanity through aggression against the Syrian Arab Republic, a sovereign country. The use of proxy mercenary armies camouflaged by a fictitious “civil war,” according to the Obama Doctrine, masks the identities of their sponsors. It cannot hide them however, nor their aggression, from the light of day nor the reaches of international law. END_OF_DOCUMENT_TOKEN_TO_BE_REPLACED

Syria: Meddling in the name of ‘empowering women’

Since the forces led by the Syrian government have gained the upper hand in Syria, Canada has been unable to justify openly going into Syria which it had sought to do in the past. Recently, Canada announced $45 million to fund programs in Jordan, Iraq and Lebanon, countries that neighbour Syria.

The funding is allegedly to “assist grass roots women’s organizations and assist Jordanian and Lebanese communities in hosting over 1,660,000 registered Syrian refugees.” END_OF_DOCUMENT_TOKEN_TO_BE_REPLACED 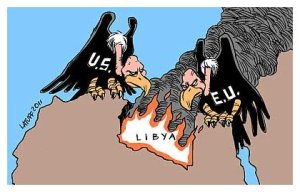 US delivers 3,000 tons of weapons and ammo to Al-Qaeda & Co in Syria

The United States via its Central Intelligence Agency is still delivering thousands of tons of additional weapons to al-Qaeda and others in Syria.

Word. ‘West crying for refugees with one eye, aiming gun with the other’ – President Assad of Syria

In a rare interview with Russian media outlets on September 18, 2015, RT among them, Syrian leader Bashar Assad spoke about global and domestic terrorism threats, the need for a united front against jihadism, Western propaganda about the refugee crisis and ways to bring peace to his war-torn nation.

END_OF_DOCUMENT_TOKEN_TO_BE_REPLACED

Despite propaganda, the ISIS-takfiri terrorists are being supported, trained and armed by the US, NATO and its regional puppets. Washington just signed an agreement with Turkey to train “moderate” rebels to fight in Syria. Isn’t this what the US has been doing in Jordan for more than two year? ZAFAR BANGASH*

The horrific video released on February 3 showing the burning death of Jordanian pilot Moaz al-Kasasbeh has sent shockwaves throughout the world. Such barbarism has few parallels in history and certainly none in Islamic history. Islam expressly forbids such cruel punishment despite the demented logic of the takfiris who go by different names: Da‘ish, ISIS, ISIL or even IS. END_OF_DOCUMENT_TOKEN_TO_BE_REPLACED

The demonization of Arabs, Muslims: The Harper government spreads hate in Canada while it supports terror overseas

From Ottawa and Washington to Paris, governments and the media sympathetic to those in power take advantage of attacks to drum up support for military adventures abroad. In this context, it is important to take a look back and see how Canadian troops got wrangled into Washington’s ever-expanding “war on terror” in Iraq and Syria. MAHDI DARIUS NAZEMROAYA

How Harper leveraged the Parliament attack to mislead Canada into Iraq

(March 18) – Speaking on January 22, 2015 about the multinational insurgents that he deployed the Canadian military to fight in the Middle East, Canadian Prime Minister Stephen Harper confidently declared to reporters in St. Catharines, Ontario, that, “If those guys [the Islamic State of Iraq and Syria militants] fire at us, we’re going to fire back and we’re going to kill them.” END_OF_DOCUMENT_TOKEN_TO_BE_REPLACED

‘Fight against terrorism’ – Cover to support U.S. aggression against Syria and Iraq

Harper stated in Mississauga, “The current authorization laid open the possibility of going into Syria, though we have not done that.” He will “address those issues” when the new proposal is revealed, he said. LOUIS LANG

(March 21) – In a speech in Mississauga on March 18, Prime Minister Stephen Harper announced that he would be presenting a motion to the House of Commons the following week to “extend and expand” the Canadian mission in Iraq. END_OF_DOCUMENT_TOKEN_TO_BE_REPLACED

Canada’s role in the service of U.S. imperialism