This Day. A Reflection on the 100th Anniversary of the Halifax ‘Big Strike’ of 1919

Militant tradition of workers’ struggles in the Atlantic Provinces

May First, international working class day, marked the 100th anniversary of the Halifax General Strike of 1919. Events in Halifax in 1919 and after must be seen within the context of both regional, national and international developments and working-class activity. Between 1916 and 1925 the Maritimes experienced unparalleled levels of strike activity. Significantly this upsurge was not confined to the coal mining communities of the region. Economic militancy often translated into political action. Miners in industrial Cape Breton, Cumberland and Pictou counties, steelworkers in Sydney, and industrial workers in Halifax, gypsum workers in Hants County in the Annapolis Valley, and workers in Amherst, New Glasgow and Saint John participated in the upsurge of radicalism seen across the country. In March 1919 a “great mass meeting” in Sydney endorsed a resolution by Nova Scotia Federation of Labour organizer Clifford C. Dane of Pictou for a strike of all Nova Scotia workers if the provincial government failed to enact legislation for an eight-hour day. [1]

END_OF_DOCUMENT_TOKEN_TO_BE_REPLACED

Filed under Canada, No Harbour for War (Halifax), Working Class

May Day 2019: Workers must strengthen the work to advance their own demands

Hail May Day! International day of working class unity and affirmation of the struggle for its rights, claims and emancipation!

The Communist Party of Canada (Marxist-Leninist) sends its militant May Day greetings to the workers of Canada, Quebec and around the world. The working class is showing in deeds its mettle and maturity in the battle for its rights, claims and emancipation. Working people are striving for their own empowerment in economic and political affairs. Workers are speaking out in defence of what belongs to them by right and increasingly using their own organized means of communication to express their views and opinions. END_OF_DOCUMENT_TOKEN_TO_BE_REPLACED

Tagged as Communist Party of Canada (Marxist-Leninist), Event, May Day

May Day 2019: Actions across Canada

All events May 1 unless otherwise noted

END_OF_DOCUMENT_TOKEN_TO_BE_REPLACED

Tagged as Event, May Day

Every May 1, thousands of Filipino labourers come together across the country and fill the streets with a familiar rallying cry: “Mabuhay ang manggagawang Pilipino!” (Long live the Filipino worker!). The goal of the demonstrations is to bring to the forefront issues such as fair remuneration and labour export policies as well as such demands as to end U.S. military bases and domination.  END_OF_DOCUMENT_TOKEN_TO_BE_REPLACED

Tagged as May Day, Philippines 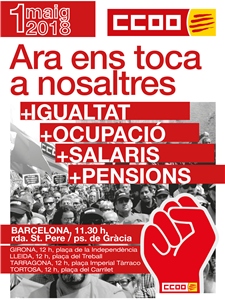 Tagged as Catalonia, May Day, Spain

MAY 1 – International Workers’ Day rally and march
Public · Hosted by Halifax-Dartmouth & District Labour Council
Tuesday at 5 PM – 6:30 PM
Halifax Grand Parade, Barrington St, Halifax, Nova Scotia
May 1 is the international day of celebrating the working class struggle for a better world.
The Halifax-Dartmouth & District Labour Council invites everyone who is a friend of this struggle to come rally at Grand Parade Square in front of city hall at 5:00pm. We will march at approx. 6:00-6:30pm. A reception will be hosted by the Mayworks Festival at the Bus Stop Theatre at 6:30pm.

Dave Shaw (25 April at 20:09):  May 1st! friends and allies, hope to see you there, great to see the Labour Council take this day on, as it normally is THE day of recognition of labour internationally. Years ago we met with resistance when we attempted to forge ahead with this very special day for a MAYDAY rally. People like Tony Seed, Aaron Doncaster Allan Bezanson Ivy Shaw Jeff Callahan, Toni MacAfee Charles Spurr and others were part of the loyal small contingent we were able to pull together years ago. Bravo that Labour is recognizing this day again in Halifax .

All Out to Build the New!

As workers all over the planet prepare to mark May Day 2018, contingents of the international working class reflect on their situation and their demands. In Cuba, the working people will celebrate their people’s power and pledge to take further measures to consolidate their socialist economy. In the capitalist world workers know from direct experience that the problems they face at work and generally in their lives and society are connected with the unresolved problem that political power is in the hands of alien class interests. To solve those recurring problems the working class must take collective action to sort out the question of Who Decides? END_OF_DOCUMENT_TOKEN_TO_BE_REPLACED