The day after the federal elections, September 21, about 50 Mi’kmaq fishers and their supporters held a rally outside the Atlantic headquarters of the Department of Fisheries and Oceans (DFO) in Dartmouth, Nova Scotia to affirm their hereditary and treaty fishing rights and serve notice to the government that they will continue to vigorously defend these rights.

END_OF_DOCUMENT_TOKEN_TO_BE_REPLACED

Hands off Mike Sack and all Mi’kmaq fishers!

Hold the Trudeau Government Accountable for Violence Against Indigenous Peoples

Chief Mike Sack is the courageous leader of the Sipekne’katik First Nation of the sovereign Mi’kmaq people. He was illegally arrested and taken in for questioning following a press conference August 17 at which he announced his community will resume their self-regulated fishery. Like all previous federal governments, the Trudeau government refuses to recognize the hereditary rights of the Mi’kmaq to fish, or their sovereignty. The fact is that the Mi’kmaq do not have to ask Canada’s permission to fish as they have responsibly done for millennia.

END_OF_DOCUMENT_TOKEN_TO_BE_REPLACED

This day in 1890: The massacre at Wounded Knee

Court of Leaves, Painting by GateKeeper

1890 (29 December): The 7th U.S. Cavalry commanded by Col. James Forsyth massacred 300 unarmed and peaceful Lakhota Sioux Indians, many of them women and children, at Wounded Knee Creek (Chankpe Opi Wakpala), South Dakota – a Lakota encampment on the Pine Ridge Indian Reservation – after a fruitless search for weapons in their encampment. In other words, the Sioux are completely disarmed. About thirty soldiers also died, many victims of their own crossfire. END_OF_DOCUMENT_TOKEN_TO_BE_REPLACED

This Day. ‘Discovery’ of New Found Land and Cape Breton: Who was Caboto and what was his claim on Canada?

The Venetian navigator Giovanni Caboto (John Cabot), commissioned by Henry VII of England, landed in Newfoundland, on June 24, 1497 believing it to be an island off the coast of Asia and named it New Found Land. [[1] Under the commission of this king to “conquer, occupy, and possess” the lands of “heathens and infidels”, Caboto reconnoitred the Newfoundland coast and also landed on the northern shore of Cape Breton Island in Nova Scotia. [2]

He returned to England on August 6 and took three Mi’kmaq with him, thereby introducing slavery into North America. This may be responsible for his disappearance when he returned to Newfoundland with five ships in 1498. When his ships arrived in northern Cape Breton Island, the Mí’kmaq attacked. Only one ship returned to England, the other four, with Caboto as Captain, never returned. END_OF_DOCUMENT_TOKEN_TO_BE_REPLACED

Pam Palmater is a Mi’kmaq lawyer, professor and Chair in Indigenous Governance at Ryerson University, a noted media commentator, activist and advocate for the rights of First Nations people, women and children. Ms. Palmater appeared before the House of Commons Standing Committee on Public Safety and National Security on the morning of March 24 as a witness to speak to her concerns about Bill C-51, the Anti-Terrorism Act, 2015. Her eloquent testimony reveals the extent to which people are already targeted by security forces for being political in Canada and how Bill C-51 aims to go further. Palmater also provides an example of the refusal to be intimidated by state forces and why it is necessary to stand up for rights.

Calendar: Events across Canada to defeat Bill C-51 and defend the rights of all END_OF_DOCUMENT_TOKEN_TO_BE_REPLACED

(MRCH 26) – The Harper government’s response to the testimony of Mi’kmaq activist, lawyer and professor Pam Palmater on Bill C-51 was an example of crude irrationalism and diversion from substantive issues. Dr. Palmater explained in her submission to the committee that, despite having never been arrested or charged with a crime, or having advocated violence, freedom of information requests show that she is being actively monitored and investigated by CSIS, the RCMP and Aboriginal Affairs and Northern Development Canada. END_OF_DOCUMENT_TOKEN_TO_BE_REPLACED

This day in history. The RCMP assault on the Mi’kmaq

(Oct. 17) – The RCMP raid on a Mi’kmaq Warrior blockade against fracking [by a US corporation], went down a year ago today. I happened to be covering and camping at the blockade when the shit went down. What I witnessed there was how far the state will use force to protect the interests of corporations. But I also witnessed the huge hearts of the community of Elsipogtog and the uncompromising bravery of the warriors. Thanks to Linda Clair, Migitjo M Clair and Suzanne Patles for their hospitality while I was there. Big ups to Amanda S. Lickers of Reclaim Turtle Island for all the support work she during and after the raid. Finally, I also have to acknowledge that I would have never heard about the anti-fracking struggles in Elsipogtog, if it wasn’t for the persistent and solid journalistic work of Miles Howe of the Halifax Media Co-op. – Franklin López see video here: subMedia.tv

TML Daily (Oct. 21) – THE Elsipogtog First Nation in New Brunswick has been blockading a fracking operation by SWN Resources Canada, a subsidiary of Texas-based Southwestern Energy (SWN). This spring, SWN began preliminary testing for shale gas exploitation in the area without prior consultation with First Nations, as required by law. END_OF_DOCUMENT_TOKEN_TO_BE_REPLACED

OVER 250 PEOPLE took part in a spirited demonstration in Halifax on Friday afternoon, October 18,  to condemn the violence unleashed by the Canadian state against the Elsipogtog First Nation in New Brunswick. Some 40 protesters were arrested Thursday, outside the Elsipogtog First Nation reserve near Rexton, NB where they had set up a blockade two weeks ago to try to stop seismic testing at the site of a proposed shale gas development. END_OF_DOCUMENT_TOKEN_TO_BE_REPLACED

All out to support the just demands of the Elsipogtog First Nation! Oppose criminalization of their just demands! Energy monopolies watch out!

CPC (ML) vigorously condemns the violence unleashed by the Canadian state against the Elsipogtog First Nation in New Brunswick. We equally condemn the diversionary tactic of the monopoly media for sowing confusion by making the central issue that of who instigated the actions that occurred  yesterday, October 17. This diversion is designed to hide that what is at stake in the struggle of the Elsipogtog First Nation is the defence of their inviolable national and hereditary rights in the face of the negation of those rights by the Canadian state, which is working hand-in-glove with the energy monopolies. END_OF_DOCUMENT_TOKEN_TO_BE_REPLACED
0.000000
0.000000

The following is an eye-witness report of the state violence carried out by the RCMP early in the morning of October 17, written by journalist and colleague MILES HOWE for the Halifax Media Co-op

War Chief Seven Bernard was unarmed, outmanned and off the path of SWN’s injunction. Was any of this necessary? [Photo: Miles Howe] END_OF_DOCUMENT_TOKEN_TO_BE_REPLACED
0.000000
0.000000

Our Mi’kmaq relatives need our support. Members of the Elsipogtog First Nation and supporters of the Anti-Shale, Anti-Fracking Nonviolent Action in New Brunswick (Canada) were under attack today because of state-initiated violence by the RCMP. Idle No More denounces this state violence and calls out to all of our supporters GLOBALLY to light your sacred fires or other peaceful actions to show support and alliance with the people of New Brunswick.

Today, settlers and Indigenous protestors and Warriors were subjected to violent action from the RCMP for their participation in a legitimate peaceful nonviolent action defending their lands and asserting their sovereign duty to protect the land and the people.  Stand in solidarity with the protestors by taking action below! END_OF_DOCUMENT_TOKEN_TO_BE_REPLACED 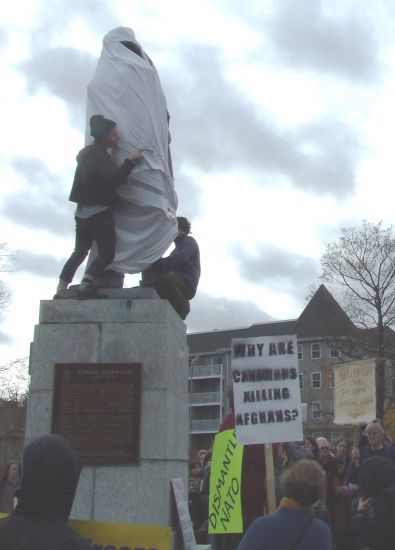 Commemorative statue shamelessly honouring the Genocidaire Cornwallis is covered by anti-war activists at protest against the Halifax International Security Forum, November, 2010. The rally renamed “Cornwallis Park” Peace & Freedom Park as a tribute to the heroic struggle of the First Nations against imperialist war and conquest, including the present-day stand of the Innu against NATO training flights in Labrador.

EDWARD CORNWALLIS was a military leader tasked with founding Halifax in 1749 as part of Britain’s strategy to capture all of North America and push France off the continent.

Edward Cornwallis was a genocidal war criminal whose attempted extermination of the Mi’kmaq people ranks as one of the province’s darkest chapters.

For 300 years, the debate over his legacy has raged. But until now, one person has been strangely absent: Cornwallis himself. No biography told his story and provided deep context for the events of 1749-1752. Jon Tattrie’s new book, Cornwallis: The Violent Birth of Halifax, uses Cornwallis’s own writing, and the writing of those who knew him best, to unearth the man buried by the controversy. END_OF_DOCUMENT_TOKEN_TO_BE_REPLACED

Newfoundland: Genocide of a people

ACCORDING to Queen Elizabeth II, the landfall in Newfoundland in June, 1497 of the Venetian navigator Giovanni Caboto (John Cabot), financed by Henry VII of England,  “represented the geographical and intellectual beginning of modern North America…” (Vancouver Province,25 June 1997). As is well known, in Newfoundland the genocide of the Beothuk Indians occurred, like the Taino of the Caribbean. Queen Elizabeth was right – the pattern was set there. So far as the native peoples are concerned, of course, the pattern set was genocide. END_OF_DOCUMENT_TOKEN_TO_BE_REPLACED

By the Canadian Network on Cuba

ON MAY 5, 2010 a moving ceremony was held in Havana, Cuba to mark the continuing success of the Canadian Network on Cuba (CNC)’s Cuba for Haiti Campaign. The campaign, launched in January 2010 in response to the earthquake disaster has thus far raised nearly $100,000 to support the Cuban Henry Reeve Medical Brigade in Haiti. END_OF_DOCUMENT_TOKEN_TO_BE_REPLACED

HALIFAX (November 21, 2009) – ABOUT 200 protesters gathered in a park outside an international military conference in Halifax today to demand that Canada withdraw from Afghanistan and from NATO, the trans-Atlantic alliance that is waging war in Afghanistan. One demonstrator carried a sign reading “60 years is 60 years Too Long” referring to Canada’s membership in the North Atlantic Treaty Organization, the U.S.-led military alliance formed in 1949. END_OF_DOCUMENT_TOKEN_TO_BE_REPLACED

Welcome to our first online publication!

Shunpike shun.pike n (1862): a side road used to avoid the toll on or the speed and traffic of a superhighway – shun.pik.er n– shun.pik.ing n Encyclopaedia Britannica

(August 6 / Revised August 18, 2003) – SINCE the launching of Shunpiking on 3 December 1995, our magazine has matured and developed to become a vibrant news and quality information source for Nova Scotians, readers across Canada and not a few readers around the globe.   Now we are launching Shunpiking Online on the World Wide Web to complement and extend the reach, topicality and timeliness of Shunpiking Magazine. END_OF_DOCUMENT_TOKEN_TO_BE_REPLACED