Against the genocidal British partition of 1947: At the farmers’ encampments in India

(June 10) – On June 3, farmers at the encampments surrounding Delhi marked the 74th anniversary of the proclamation of the partition of India by the British. On June 3, 1947, the last British Viceroy of India, Lord Mountbatten, declared that India would be partitioned into two dominions. Muhammad Ali Jinnah, leader of the All-India Muslim League, spoke after him and accepted the partition of India and creation of the Dominion of Pakistan. Then came Jawaharlal Nehru whose acceptance of partition made him the first Prime Minister of India. So too, Baldev Singh claimed to represent the Punjabi Sikh community in the processes of negotiations that resulted in the Partition of India in 1947, for which he became the first Minister of Defence of India. The Congress laid claim to secularism but nonetheless demanded that Punjab and Bengal also be divided on the basis of religion. Leaders of the Communist Party of India had already accepted partition and all the parties conspired with the British against the peoples of India. June 2 marks the date when Mountbatten presented the plans for the partition of India to all these people and they accepted it. Mahatma Gandhi, who had been saying, “partition over my dead body,” told Mountbatten that he had vowed to maintain silence and would not oppose it.

END_OF_DOCUMENT_TOKEN_TO_BE_REPLACED

Indian Occupation forces continue to target and kill civilians across the LOC in Kashmir with increasing intensity and frequency. In contrast to the silent acquiescence of the Trudeau Liberals, a Canadian delegation of human rights activists led by Zafar Bangash, director of the Toronto-based Institute of Contemporary Islamic Thought, visits the region on an independent fact-finding investigation.

The road from Muzaffarabad, the capital of Azad Jammu and Kashmir (AJK), snakes through some of the most breath-taking scenic areas toward Chakothi, the check point on the Line of Control (LoC) in Kashmir. To the left of the road is the Neelum River, its clear blue flowing majestically toward Muzaffarabad where it meets the Jhelum River at a point called sangam (meeting point). To the right are towering mountains of the Himalayan range where rock falls are common. Some drivers are quite reckless and it is a miracle that vehicles do not plunge into the river below or get into accidents on the twisting road. END_OF_DOCUMENT_TOKEN_TO_BE_REPLACED

China in the crosshairs of Halifax War Conference

Toronto rally and march defends the rights of the Kashmiri people

More than 250 people participated in a rally and march at the Ontario legislature on October 19, to affirm the right of the Kashmiri people to self-determination in the face of a brutal military occupation and lock-down by the Indian state which has lasted for more than 80 days. The action was held on the eve of the federal election to demand that whichever party comes to power, it must speak out and condemn the Indian government’s brutal campaign of state-terror and violence in Kashmir. India launched this assault after Article 370 of the Indian Constitution, giving Kashmir a degree of autonomy, was rescinded, on August 5 by the Modi government. END_OF_DOCUMENT_TOKEN_TO_BE_REPLACED

Kashmiri people persist with their demands for self-determination

The Pakistani authorities blocked thousands of protesters who began a march to the de facto border which divides Indian- and Pakistani-controlled Kashmir, known as the Line of Control (LoC). END_OF_DOCUMENT_TOKEN_TO_BE_REPLACED

A review of Carlotta Gall’s The Wrong Enemy: America in Afghanistan | OMAR AHMAD 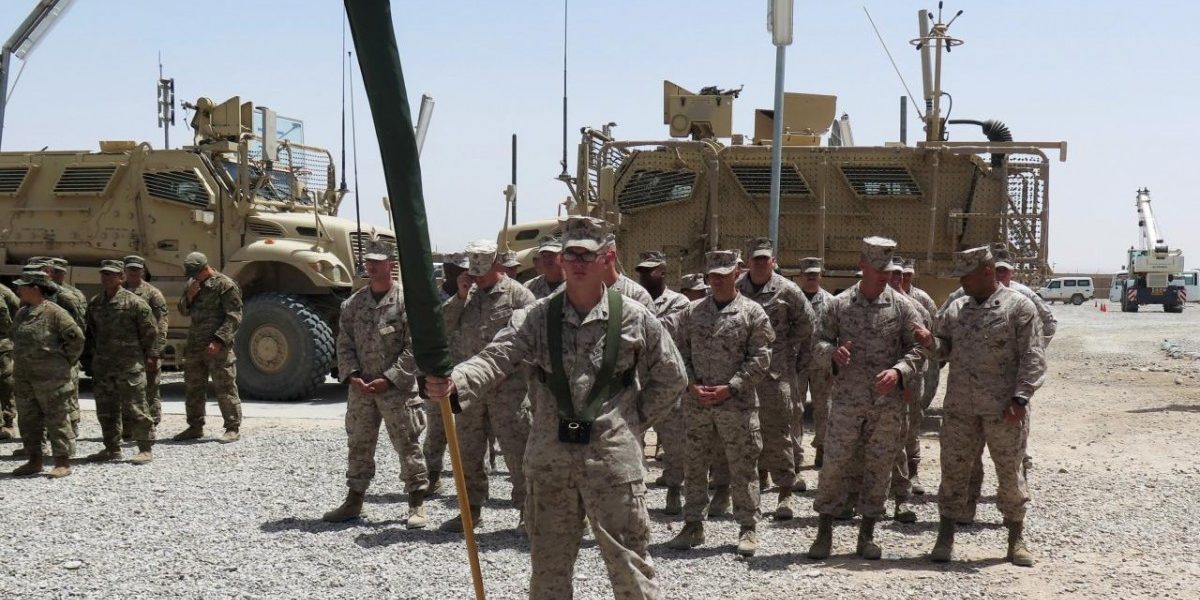 US Marines stand in formation during a transfer of authority ceremony at Shorab camp, in Helmand province, Afghanistan April 29, 2017 | Reuters/James Mackenzie

In 2003 I attended a hearing on Afghanistan at the US Senate. During the hearing, at which a serving general and a few other experts were giving their testimony, the then Chairman of the Senate Foreign Relations Committee, Joe Biden, leaned forward and said something to the effect of, “I’ve always felt that rather than sending 100,000 troops to Iraq, we should have sent 25,000 troops to Waziristan instead.” END_OF_DOCUMENT_TOKEN_TO_BE_REPLACED

Pakistani Prime Minister Nawaz Sharif seems to have hit a jackpot: the recently announced Chinese plan to invest $46 billion in Pakistan’s infrastructure – roads, railways and power plants – to facilitate transport of Chinese goods to markets worldwide. It will also allow China to largely circumvent the threat of a maritime blockade of Chinese energy imports from the Middle East by the United States and its “Asia Pivot” strategy designed to isolate and contain China and the Democratic People’s Republic of Korea.
END_OF_DOCUMENT_TOKEN_TO_BE_REPLACED

Addressing on the occasion, PTI leaders vowed to continue anti-drone campaign in Khyber Pakhtunkhwa and other parts of the country. They said that NATO supplies will remained blocked till assurance of United States for stopping drone attacks. They criticised the role of the federal government to stop drone attacks in Pakistani tribal areas and said that Pakistan Muslim League (N) leadership has failed to convey their message for halting drone strikes in Pakistan.

Malala Yousufzai, the 16-year-old Pakistani girl from Swat, has become an international celebrity. She wants to become the prime minister of Pakistan to “save” it, as she puts it. There is plenty of help available. The latest in a long line of international personalities to promote her was none other than Queen Elizabeth of Britain. Malala was invited to Buckingham Palace as part of 350 youth from the Commonwealth. END_OF_DOCUMENT_TOKEN_TO_BE_REPLACED

FOR THE information of our readers, we are providing an indepth, secret history of U.S. drone warfare during the past year by CHRIS WOODS, JACK SERLE and ALICE K. ROSS, the Bureau of Investigative Journalism. Drone warfare is a political program of warfare and extra-judicial assassination that operates directly from the White House against citizens of sovereign states, without any charges or judicial process, constituting an inhuman war crime and a reckless disregard for international law. END_OF_DOCUMENT_TOKEN_TO_BE_REPLACED

Disinformation: Was Malala Yousafzai used for a larger U.S. plan?

Exposé: The attack on Malala Yousafzai, a 15-year-old Pakistani schoolgirl, this past October evoked worldwide condemnation. From U.S. President Barack Obama to UN Secretary General Ban Ki-moon, all condemned the attack. The respected Toronto journalist Zafar Bangash raises a central question: why is Malala given so much prominence when other attacks on girls in Pakistan and Afghanistan go virtually unnoticed? END_OF_DOCUMENT_TOKEN_TO_BE_REPLACED

Politics of assassination: U.S. contempt of the very notion of rule of law

ON MAY 1, 2011, the U.S. government announced that U.S. military personnel shot Osama bin Laden, after invading a compound in Abbottabad, Pakistan. TML Daily tries to provide the facts of events to inform readers but as is always the case when the U.S. imperialists publish their disinformation, the “facts” constantly change to suit a nefarious aim.

At first bin Laden was armed, used his wife as a “human shield” and fired from behind her, resulting in a 40-minute firefight and her death. It was later announced that bin Laden was unarmed, that only one person in the compound was armed and that bin Laden’s wife was alive. END_OF_DOCUMENT_TOKEN_TO_BE_REPLACED