The war on innocence: Palestinian children in Israeli military court

On July 29, 4-year-old Muhammad Rabi’ Elayyan was reportedly summoned for interrogation by the Israeli police in occupied Jerusalem. END_OF_DOCUMENT_TOKEN_TO_BE_REPLACED

Child killers: Condemned by their own words

This transcript of an Israeli General on an Israeli radio station (begins 6.52 in) defending the killing by Israeli army snipers in April 2018 of a 14-year-old boy, who posed no threat of any kind, is much more powerful if you just read it than any analysis I can give. The Israeli occupation forces have arrested 16.500 Palestinian children and girls since the year 2000. 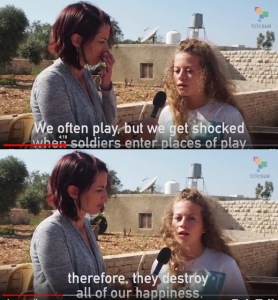 The same newspaper that heralds “a new era” for women in Canada victimized by “men in power” has no objection to the brutish treatment of Ahed Tamimi, the 16-year-old Palestinian girl who is in indefinite military custody for courageously challenging Israeli occupation forces on her family’s property. The Globe and Mail has carried but one item – on January 1 from Reuters. CBC also carried the same item on January 1st. The Toronto Star carried a derivative six-sentence item on the same date. END_OF_DOCUMENT_TOKEN_TO_BE_REPLACED

‘How was such a fool your US ambassador?’ Tamimi family mocks Israel’s secret probe into whether they’re real Palestinians

deliberately costumed in clothing that Americans could relate to like backwards baseball caps. “If that’s your elite, I’m not sure how you manage to beat us” | Yotam Berger,  Haaretz 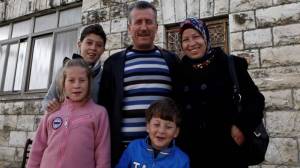 (January 25) – The four members of Ahed Tamimi’s family who are not in detention were amused to hear that the Knesset had conducted an investigation into whether the Tamimis are a real family. END_OF_DOCUMENT_TOKEN_TO_BE_REPLACED

On Human Rights Day: Israeli occupation continues to carry out mass arrests of Palestinians and subject them to abuse 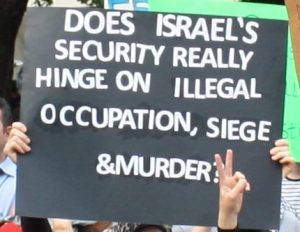 Occupied Ramallah (10 December) –This year, Palestinians mark International Human Rights Day mourning over 118 Palestinians including 25 children who were killed by IOF in the past two months. Palestinians mark this day following two months of nonstop violence and widespread human rights violations by Israeli Occupation Forces against the Palestinian civilian population in response to a popular uprising in the occupied territory. Today, over 6,500 Palestinians remain imprisoned by Israeli occupation including at least 450 children, 587 Palestinians held under arbitrary administrative detention without charge or trial and five members of the Palestinian Legislative Council. END_OF_DOCUMENT_TOKEN_TO_BE_REPLACED

Israel’s investigations into its own crimes aren’t known for delivering guilty verdicts. END_OF_DOCUMENT_TOKEN_TO_BE_REPLACED

Harper’s double standards on Palestine and Ukraine: Not all child casualties of war are innocent

ANDREW MITROVICA* on Harper’s perverse provision of militarized “aid” to the Kiev junta, the murky role of the billionaire owner of a pharmaceutical company (Eugene Melnyk, BIOVAIL) who’s also the chairman of the Campaign Advisory Committee for “United with Ukraine” … and the wounded children of Gaza.

Palestinian doctors treat children wounded in an Israeli airstrike on a building, at the treatment room of al Najar hospital in Rafah in the southern Gaza Strip, Thursday, Aug. 21, 2014 | AP Photo/Hatem Ali

ipolitics (Sept. 16) – Before last week, I thought I understood the depth of Prime Minister Stephen Harper’s malevolence. I was wrong.

Only now do I appreciate just how ugly this prime minister is. I didn’t think it was possible for even a government as rabidly partisan as this one to add Palestinian children to its long list of enemies. That’s not hyperbole. Truth.

END_OF_DOCUMENT_TOKEN_TO_BE_REPLACED

In a hospital. At the beach. Hamas, Israel tells us, is hiding among civilians

According to Israel, Hamas is cowardly and cynical

They hid at the El-Wafa hospital.

They hid at the Al-Aqsa hospital.

They hid at the beach, where children played football. END_OF_DOCUMENT_TOKEN_TO_BE_REPLACED

Israel renewed its ongoing murderous assault on the Palestinian people on July 15 after the scam of its so-called “humanitarian ceasefire.” By Wednesday evening, at least 214 had been killed and over 1,000 people injured. A running count kept by United Nations officials shows that  about 75 per cent have been civilians, including more than three dozen children.

END_OF_DOCUMENT_TOKEN_TO_BE_REPLACED

On June 21, amidst Israel’s “Operation Brother’s Keeper” allegedly searching for three missing Israeli settler youth, the Palestinian Human Rights Organizations Council published an open letter to the European Union High Representative for Foreign Affairs and Security Policy. The Council called for action against Israel’s crime of collective punishment and other human rights violations, in particular pertaining to its position as the occupying power in Palestine. We are posting below excerpts from that letter. END_OF_DOCUMENT_TOKEN_TO_BE_REPLACED 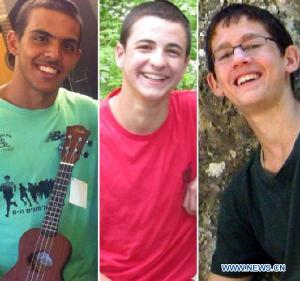 We are posting below excerpts from a June 16 item by Ramzy Baroud published in the Palestine Chronicle. Although written before the Zionists’ disinformation about the three missing Israeli youth came to light, the item outlines attempts of the Netanyahu government’s to manipulate the situation for self-serving reasons to undermine the unity of the Palestinian people, specifically the newly formed unity government between Hamas and Fatah. END_OF_DOCUMENT_TOKEN_TO_BE_REPLACED

Beating of US teen underscores Zionists’ crimes against the youth 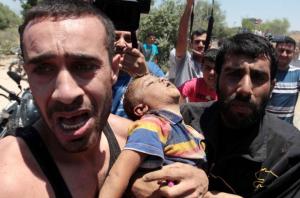 Relatives carry the body of a boy killed in an Israeli air strike on Gaza on July 9, 2014. | UPI – Ashraf Amra

The Gaza health ministry has confirmed the deaths of 88 Palestinians so far and over 500 injured  in the besieged strip since Israel began its relentless assault early Tuesday. Among those killed, at least 21 were aged 16 or younger. The youngest victim, 18-month-old Mohammed Malakiyeh, was killed along with his 27-year-old mother. 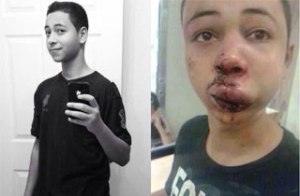 FIFTEEN-YEAR-OLD U.S.-born Palestinian-American Tariq Abu Khdeir was brutally beaten by masked Israeli police on the evening of July 3 in the Shuafat neighbourhood of occupied East Jerusalem. His 16-year-old cousin, Mohammed Abu Khdeir, was lynched by Zionist extremists the day before in that area. Israeli authorities claim Tariq was arrested for participating in a demonstration against the killing of Mohammed. Video of the attack shows Tariq being brutally beaten into unconsciousness. END_OF_DOCUMENT_TOKEN_TO_BE_REPLACED

Graphic details. To whom it may concern

The Israeli Zionist daily Haaretz has published details of the process in which Palestinian children are callously arrested. Here is an infographic prepared by the moqawama website to visualize the scene (click to enlarge):