Why is Israel attending an OAS Summit?

(May 31, 2009) – ISRAEL, which is gradually losing the support it enjoyed in the EU and the U.S., is planning to develop an overt and covert presence in Latin America to counter Iran’s growing ties in the region. Readers may remember its unsavoury role in arming and training the bloody security forces of the Central American oligarchy during the 1970s and 1980s, which was exposed in the Contra scandal during the Reagan administration. END_OF_DOCUMENT_TOKEN_TO_BE_REPLACED

US Southern Command and the phoney ‘War on Drugs’: Pretext for ceaseless militarization of the Americas 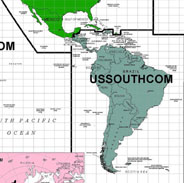 HALIFAX (13 August 2007) – THE CANADIAN WARSHIP HMCS Fredericton and an Aurora aircraft were deployed in the Caribbean Sea under the command of the US Joint Interagency Task Force during July. The American Force is based at Key West, Florida, which also serves as a base for the National Security Agency that, in April 2002, centralized communications support for the failed coup d’etat in Venezuela. The Task Force operates as a subordinate command to the US Southern Command (Southcom), Miami – one of the five US military commands that span the globe. END_OF_DOCUMENT_TOKEN_TO_BE_REPLACED

‘Partnership of the Americas’: The system of U.S. bases

For sovereignty and dignity – no gringo bases. no a bases gringas

HALIFAX (August 13, 2007) – THE MASSIVE US NAVAL WAR GAMES of U.S. Southern Command such as the recently-completed “Partnership of the Americas”, features the largest number of U.S. naval forces ever deployed in the Caribbean Sea, as well as NATO and Canadian warships. It also involves a network of bases, with some thirty in South America, already established or in stages of reconstruction, camouflaged with “anti terrorist” or anti-narcotic competences and undertakings. END_OF_DOCUMENT_TOKEN_TO_BE_REPLACED

Filed under Caribbean, No Harbour for War (Halifax)