“With our deepest respects, we dedicate this issue of TML Supplement to all the men, women and youth valiantly fighting to abolish the racist U.S. prison system and those in other countries including Canada.”

On September 9, 1971 a rebellion started at the Attica Maximum Security Prison in upstate New York which ended with the brutal massacre conducted by New York State Troopers sent in by Governor Nelson Rockefeller on September 13, 1971.

END_OF_DOCUMENT_TOKEN_TO_BE_REPLACED

This Day. The 1980 H-Block hunger strike in Belfast 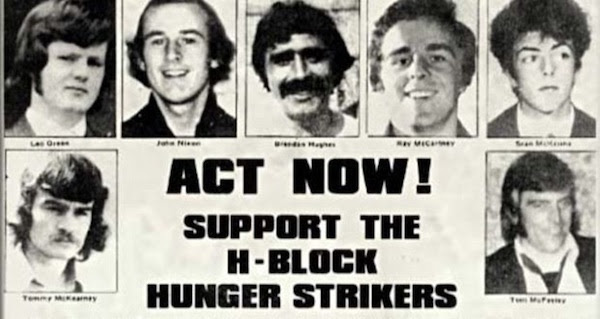 Irish political prisoners confined in the infamous H-Blocks of Long Kesh commenced a hunger strike on October 27, 1980, 40 years ago this week.

The hunger strike was to continue until their demands for political status and for an end to British torture were met, or until death. END_OF_DOCUMENT_TOKEN_TO_BE_REPLACED

Mass incarceration and the pandemic (II)

The British Prison Governors’ Association submitted to the House of Commons Justice Committee (which on April 8 considered prisoner releases in closed session) that 15,000 non-violent prisoners need to be released to give the jails any chance of managing COVID-19. END_OF_DOCUMENT_TOKEN_TO_BE_REPLACED

Mass incarceration and the pandemic (I)

A brutal aspect of social conditions in the U.S. is mass incarceration, that disproportionately affects African Americans, Indigenous peoples and national minorities, a situation which prisoners and activists have sought to change for decades. An article published on April 2 in the New England Journal of Medicine, titled “Flattening the Curve for Incarcerated Populations — COVID-19 in Jails and Prisons,” points out how this issue needs to be directly addressed during the pandemic in order to stop the spread of the coronavirus.[1] Authored by three medical doctors, the article states: END_OF_DOCUMENT_TOKEN_TO_BE_REPLACED

This Day. Quotes by Bobby Sands

Today is the 48th anniversary of the death of the heroic Irish patriot Bobby Sands (Irish: Roibeárd Gearóid Ó Seachnasaigh; 9 March 1954 – 5 May 1981) after 66 days on hunger strike at Long Kesh prison. We remember Bobby and his comrades and the blanket men and the women in Armagh. In his solemn memory, we publish a brief collection of quotes, some famous, some less well known.

END_OF_DOCUMENT_TOKEN_TO_BE_REPLACED

Centenary of the End of World War I: British Movement of Conscientious Objectors

Dyce Work Camp was set up in August 1916 at quarries north-west of Aberdeen, Scotland. Conscientious Objectors had been released from prison on condition that they performed “work of national importance” – breaking up granite rock for road building.

US and Canadian prisoners launch their strike against prison slavery

Incarcerated people in at least seventeen states in the U.S. have launched a prison strike from August 21st-September 9th. Inmates are engaging in work stoppages and hunger strikes, among other methods, in a bid to push for better conditions, more rights and an end to prison slavery.

The prisoners from Burnside [Central Nova Scotia Correctional Facility] have joined the protest. Here is their statement:

END_OF_DOCUMENT_TOKEN_TO_BE_REPLACED

George Lester Jackson was an African-American activist, author and member of the Black Panther Party. When Jackson was 18 years old, he was sentenced from one year to life for stealing US$70 from a gas station. He spent the next 11 years in prison, eight and a half of them in solitary confinement. END_OF_DOCUMENT_TOKEN_TO_BE_REPLACED

Today is the birthday of Bobby Sands (Irish: Roibeárd Gearóid Ó Seachnasaigh; 9 March 1954 – 5 May 1981) , an Irish independence fighter and Member of Parliament who died while on a heroic hunger strike along with other Irish Republican prisoners in the H-Blocks of Long Kesh prison in Northern Ireland in 1981. They were incarcerated for resisting both British rule and discrimination. Their hunger strike was in protest at the conditions they faced in jail, a brutal feature of colonial rule.

Sands joined the Provisional Irish Republican Army when he was 18. Shortly after he was arrested for the possession of four handguns found in the house where he was staying. He was tortured in the Castlereagh interrogation centre and sentenced to 14 years. After that he never saw a Christmas outside prison. He died at the age of 27. END_OF_DOCUMENT_TOKEN_TO_BE_REPLACED

174 Palestinians kidnapped in one week

The Palestinian Prisoners Society (PPS) reported on September 14 that Israeli soldiers kidnapped 174 Palestinians in the occupied West Bank, in the second week of September, 2014.

The PPS added that most of the kidnappings were focused in the northern West Bank district of Jenin with 69 arrests in different parts of the district.

It added that the soldiers also kidnapped 40 Palestinians in the southern West Bank district of Hebron, 12 in Bethlehem, 17 in Ramallah, and 10 in occupied Jerusalem. END_OF_DOCUMENT_TOKEN_TO_BE_REPLACED

PBS (aug. 29 ) –The United Nations’ Committee on the Elimination of Racial Discrimination (CERD) has published a scathing report analyzing the current state of racial justice in the United States. Citing the August 9th shooting of 18 year-old Michael Brown, an unarmed black teenager in Ferguson, Missouri and the rise of stand-your-ground laws, the committee expressed deep concerns about the ways in which the American justice system handles racially charged events. END_OF_DOCUMENT_TOKEN_TO_BE_REPLACED

America: Land of the imprisoned (5)

Truth Out  (Feb. 7) – THERE are now over 2 million people living behind bars in the United States. That’s half a million more than China, which has a population five times greater than the U.S. (And about two-thirds the population of Toronto, Canada’s largest city.– ed.)

The worst part is that once captured by the prison industry, inmates are forced to work for pennies an hour, providing cheap labour for some of the most profitable enterprises in the world, including the U.S. Military.

According to the Left Business Observer, “the federal prison industry produces 100 per cent of all military helmets, ammunition belts, bullet-proof vests, ID tags, shirts, pants, tents, bags, and canteens. Along with war supplies, prison workers supply 98 per cent of the entire market for equipment assembly services; 93 per cent of paints and paintbrushes; 92 per cent of stove assembly; 46 per cent of body armor; 36 per cent of home appliances; 30 per cent of headphones/microphones/speakers; and 21 per cent of office furniture. Airplane parts, medical supplies, and much more: prisoners are even raising seeing-eye dogs for blind people.”

A REFLECTION BY TONY SEED

THE 90TH ANNIVERSARY of the Easter Rising in Dublin and 25th anniversary of the H-Block hunger strikes in Belfast have become times of great celebration for the Irish people and are being commemorated throughout the world, including Canada. Activities include marches, seminars, public meetings, plays, films and exhibitions. The actions of those who stood up and fought for independence in 1916 and the courageous sacrifice of the ten hunger strikers who gave their lives in 1981 represent the best of Ireland. They typify a valiant spirit that has endured much suffering over the centuries of armed British colonial occupation. END_OF_DOCUMENT_TOKEN_TO_BE_REPLACED