Nation-building in the 21st century or empire-building

Nation-building in the 21st century has to overcome the obstacles that developed during the 20th century. These obstacles derive primarily from the empire-building of the global monopolies and the big powers with which they are connected. Empire-building of the global monopolies during the twentieth century overwhelmed and defeated the nation-builders of the nineteenth century, the nascent period of capitalism, and the heroic nation-building attempt of the working class in the Soviet Union. END_OF_DOCUMENT_TOKEN_TO_BE_REPLACED

About 5,000 people rallied in Hamilton on January 30 at a very successful Day of Action organized by Locals 1005 and 8782 USW with the support of United Steelworkers, the Hamilton and District Labour Council, the Ontario Federation of Labour and other labour councils and unions. Active and retired steelworkers from Hamilton, Nanticoke and the surrounding communities attended the rally along with entire families and people from all walks of life who identify with the cause of the steelworkers. END_OF_DOCUMENT_TOKEN_TO_BE_REPLACED

January 30 Day of Action in Hamilton: Together let us stand up for the rights of all 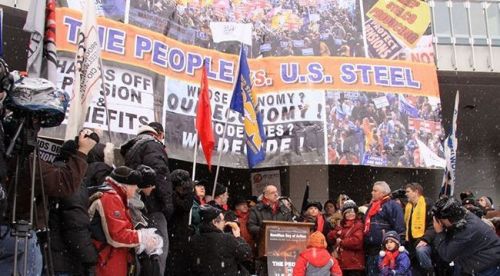 Hamiltonians and workers from different sectors of the economy from different cities in Ontario are joining steelworkers and pensioners in Hamilton to make the Hamilton Day of Action on January 30 a success. The last day of action was held in Hamilton five years ago, on January 29, 2011, at a time when U.S. Steel had imposed a phoney lockout to extort concessions from steelworkers. To its credit, Local 1005 USW launched a campaign under the theme The People vs. U.S. Steel to uphold the interests of the Stelco workforce and pensioners as well as Hamilton and Canada itself. END_OF_DOCUMENT_TOKEN_TO_BE_REPLACED

Stand as one in defence of the rights of all!

The situation at U.S. Steel/Stelco needs the people’s intervention. When the people stand as one for a just cause it makes a difference. U.S. Steel has attacked not just active and retired steelworkers and salaried employees but also the Ontario and municipal governments, suppliers, contractors, our collective economy and social fabric. It has assaulted the rights of all and the common good. END_OF_DOCUMENT_TOKEN_TO_BE_REPLACED

• Fraudulent Bankruptcy Without an Owner

An Appeal to the Court of Public Opinion

Local 1005 condemns in no uncertain terms this phony CCAA bankruptcy filed by U.S. Steel on September 16. It creates a very serious situation for active and retired Canadian steelworkers and their union, the United Steelworkers (USW), as well as the locals directly involved, Local 1005 USW at Hamilton Works and Local 8287 USW at Lake Erie Works. This phony CCAA filing also directly affects present and former salaried employees of the company, the citizens of Hamilton and their Municipal Council, and the Province of Ontario. END_OF_DOCUMENT_TOKEN_TO_BE_REPLACED

Hamilton steel: Are we a country or not?

ON BEHALF OF present and former members of Local 1005 USW, I wish to express deep regret and anger at the announced permanent closure of steelmaking at Hilton Works, which has been in operation our entire lives and has made Hamilton what it is today.

This is a dagger into the heart and soul of our community. The hand on this poisonous blade stretches from Pittsburgh but it has been guided into our chest by the federal and Ontario governments. They have the power to say no to this attack on Canada’s economy. They have the power to beat back this invasion of destructive robber barons whose private self-interest has nothing good to offer Canada. END_OF_DOCUMENT_TOKEN_TO_BE_REPLACED