Word. The destruction of the Syrian electricity network 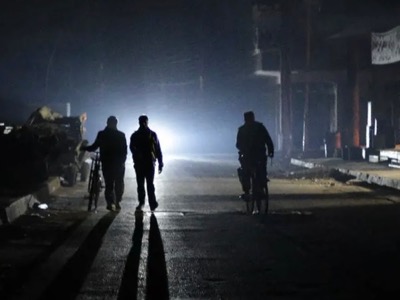 (May 19, 2020) On instructions from my Government, I wish to convey to you the following important current information relating, first, to the destruction of the cooling tower of the Zayzun power plant in the Ghab plain, in the countryside outside Hama, by the Turkistan Islamic Party terrorist group and, second, to the scale and breakdown of the losses incurred by the electricity sector in the Syrian Arab Republic: END_OF_DOCUMENT_TOKEN_TO_BE_REPLACED

White Helmets smuggled out of Syria by Israel for resettlement in Canada, other NATO countries | MARGARET VILLAMIZAR

After four years of financing and promoting the White Helmets, a U.S./NATO front for foreign intervention and regime change in Syria, NATO arranged for the Israeli military to evacuate 98 of its assets and their families from Syria on the weekend of July 21-22. The evacuation took place as Syrian government forces were liberating the last remaining pockets of terrorist-controlled territory in the southwest of the country. This should leave little doubt in anyone’s mind as to whose interests the so-called humanitarian rescue group serves. END_OF_DOCUMENT_TOKEN_TO_BE_REPLACED

Timber Sycamore was a classified weapons supply and training program run by the United States Central Intelligence Agency (CIA) and supported by various Arab intelligence services, most notably that of Saudi Arabia. The program is the proverbial tip of the iceberg. It is further evidence that the United States and/or any of its collaborators and accessories including the Canadian government, with its proxy support, training and arms programs in Kurdistan, Jordan, Israel and Saudi Arabia, are guilty of crimes against humanity through aggression against the Syrian Arab Republic, a sovereign country. The use of proxy mercenary armies camouflaged by a fictitious “civil war,” according to the Obama Doctrine, masks the identities of their sponsors. It cannot hide them however, nor their aggression, from the light of day nor the reaches of international law. END_OF_DOCUMENT_TOKEN_TO_BE_REPLACED

Rebuilding Syria, the other war

(December 19) –Although a victory may appear at hand, the reality is that another war is only just beginning in Syria, a war to rebuild the country.

Shots are still being fired and missiles launched. There are remote areas where terrorists remain entrenched, and cells in cities that will not allow the country to be declared free of these elements. And perhaps most seriously, a so-called opposition, closely liked to armed groups like Al Nusra, continues to insist they will only lay down their weapons when President Bashar al-Assad is removed.  END_OF_DOCUMENT_TOKEN_TO_BE_REPLACED

So many aspects about Syria are never reported.
A week ago, Syrian rebels shelled visitors (naturally indiscriminately) to the Damascus International Fair. Nevertheless, the total number of the visitors who toured the ten-day Fair reached 2,247 million. Forty three countries staged exhibits.

BERLIN/DAMASCUS (german-foreign-policy.com, August 28) – German companies are seeking to favourably position themselves for participation in Syria’s post-war reconstruction. Following the Damascus International Fair, which closed yesterday, the director of the Middle East Department of the German Chambers of Industry and Commerce (DIHK) noted, the development in the country is being “closely observed” and “a series of cautious initial inquiries” are already being registered. The Damascus International Fair is one of the most traditional fairs in the region and was held again, for the first time, since the beginning of the war. Particularly companies from Russia, Iran and China have good prospects for participating in Syria’s rebuilding. Since 2012, the German government has been eager to provide emergency aid and reconstruction. However, this aid was restricted to regions under insurgent control. Idlib Province, today controlled by the al-Qaeda offshoot al-Nusra (renamed Tahrir al-Sham) is one of those regions benefiting. END_OF_DOCUMENT_TOKEN_TO_BE_REPLACED

END_OF_DOCUMENT_TOKEN_TO_BE_REPLACED

US delivers 3,000 tons of weapons and ammo to Al-Qaeda & Co in Syria

The United States via its Central Intelligence Agency is still delivering thousands of tons of additional weapons to al-Qaeda and others in Syria.

Ceasefire in Syria: A who’s who of the terrorist factions

As of February 27 a cessation of hostilities began in Syria. The agreement applies to the parties to the Syrian conflict that indicate their commitment to and acceptance of its terms. It does not however apply to “Daesh,” “Jabhat al-Nusra,” or “other terrorist organizations designated by the UN Security Council,” which is part of the reason it is referred to as a cessation of hostilities rather than a ceasefire. The terms were submitted to the UN Security Council for approval by Russia and the U.S. in their capacity as co-chairs of the International Syria Support Group (ISSG). END_OF_DOCUMENT_TOKEN_TO_BE_REPLACED

Boston Globe: The media is misleading the public on Syria

Finally, an American journalist blasts the US media coverage of Syria. “Coverage of the Syrian war will be remembered as one of the most shameful episodes in the history of the American press. Reporting about carnage in the ancient city of Aleppo is the latest reason why.” STEPHEN KINZER* details features of how the monopoly media falsifies and negates the reality of the forces in combat in Syria, prettifies terrorists as “moderates” and “freedom fighters,” and portrays a war on Syria as a religious, sectarian or “civil war.” END_OF_DOCUMENT_TOKEN_TO_BE_REPLACED

moonofalabama.org (October 30 ) – During the last days a large attack on the Syrian government supply line to Aleppo city was carried out by Jabhat al-Nusra (aka al-Qaeda in Syria) and the Islamic State seemingly in coordination with the U.S. military. END_OF_DOCUMENT_TOKEN_TO_BE_REPLACED

Ahead of a meeting scheduled between Russian President Vladimir Putin and U.S. President Barack Obama and their speeches to the United Nations General Assembly in late September, the Russian President branded Washington’s support for the insurgent forces in Syria as both illegal and ineffective in an interview with Charlie Rose for the U.S. CBS and PBS television networks. Aside from saying that U.S. support to the insurgents was a “provision of military support to illegal structures” that violates “the principles of modern international law and the United Nations Charter,” Putin pointed out that the militants being trained and armed by the U.S. were actually joining the so-called Islamic State. END_OF_DOCUMENT_TOKEN_TO_BE_REPLACED

Turkey detains soldiers and intelligence agents over seizure of Syria-bound arms shipments. “Is this evidence of a highly organized fifth column within the Turkish military and state apparatus?” The Harper government is involved | TONY SEED

(Revised and updated May 23) – Turkish authorities have arrested dozens of military and security personnel from the National Intelligence Organisation (MIT) in an ongoing investigation of weapons shipments from the NATO bloc country to terrorists in Syria. The sensational development reported by Middle East Eye and regional news agencies (see below) reveals a fierce struggle within the Turkish power structure.

Testimony from gendarmerie officers in court documents reviewed by Reuters allege that rocket parts, ammunition and semi-finished mortar shells were carried in trucks accompanied by state intelligence agency (MIT) officials more than a year ago to parts of Syria under Islamist control.

END_OF_DOCUMENT_TOKEN_TO_BE_REPLACED

Amid all the doom and gloom, Iraq and Syria have taken steps to mend fences. This comes at about the same time as Barack Obama’s admission that the takfiri terrorists in Syria arose because of George Bush’s foolish decision to invade Iraq in 2003.
END_OF_DOCUMENT_TOKEN_TO_BE_REPLACED

Despite propaganda, the ISIS-takfiri terrorists are being supported, trained and armed by the US, NATO and its regional puppets. Washington just signed an agreement with Turkey to train “moderate” rebels to fight in Syria. Isn’t this what the US has been doing in Jordan for more than two year? ZAFAR BANGASH*

The horrific video released on February 3 showing the burning death of Jordanian pilot Moaz al-Kasasbeh has sent shockwaves throughout the world. Such barbarism has few parallels in history and certainly none in Islamic history. Islam expressly forbids such cruel punishment despite the demented logic of the takfiris who go by different names: Da‘ish, ISIS, ISIL or even IS. END_OF_DOCUMENT_TOKEN_TO_BE_REPLACED

‘Fight against terrorism’ – Cover to support U.S. aggression against Syria and Iraq

Harper stated in Mississauga, “The current authorization laid open the possibility of going into Syria, though we have not done that.” He will “address those issues” when the new proposal is revealed, he said. LOUIS LANG

(March 21) – In a speech in Mississauga on March 18, Prime Minister Stephen Harper announced that he would be presenting a motion to the House of Commons the following week to “extend and expand” the Canadian mission in Iraq. END_OF_DOCUMENT_TOKEN_TO_BE_REPLACED

Freedom of speech of the reactionary ruling classes.

New documents belonging to Turkey’s national intelligence service (MIT) have been leaked online, prompting the government to immediatey ban reporting on the scandal and order the content deleted. “These trucks were taking humanitarian assistance to Turkmens.” – Erdogan.

(Jan. 16) – Secret official documents about the searching of three trucks belonging to Turkey’s national intelligence service (MIT) have been leaked online, once again corroborating suspicions that Ankara has not been playing a clean game in Syria. END_OF_DOCUMENT_TOKEN_TO_BE_REPLACED

Reports by UN observers in the Golan submitted to 15 members of Security Council detail regular contact between IDF officers and armed Syrian terrorists at the border.

Israeli soldiers stand near the border with Syria in the occupied Golan Heights as they prepare to evacuate a wounded Syrian terrorist let in for medical treatment, September 23, 2014 | Photo by Reuters

(Dec. 7) – Reports by UN observers in the Golan Heights over the past 18 months reveal the type and extent of cooperation between Israel and Syrian opposition figures. END_OF_DOCUMENT_TOKEN_TO_BE_REPLACED