United Nations, Feb 26 (Prensa Latina) The Syrian ambassador to the UN, Bashar Al Jaafari, denounced this Tuesday that while some states claim to be concerned about the humanitarian situation in the Levantine nation, on the other hand they promote political and economic terrorism.

END_OF_DOCUMENT_TOKEN_TO_BE_REPLACED

german-foreign-policy.com (August 28) – In view of Syria’s reconstruction, German business circles are preparing to establish a German business office in Damascus. According to a participant, German small and medium-sized enterprises are interested in orders from this war-ravaged country. Syria, however, prioritizes enterprises from countries, which had supported President Bashar al Assad during the war, or, at least, were not engaged in efforts to overthrow him. END_OF_DOCUMENT_TOKEN_TO_BE_REPLACED

On October 20 a plenary session of the United Nations General Assembly was held in New York for a briefing on the humanitarian situation in Syria. The session, which was described as informal, was called in response to the request by Canada and 70 other member states for the General Assembly to take up the matter. END_OF_DOCUMENT_TOKEN_TO_BE_REPLACED

The program to resettle Syrian refugees in Canada (3): The settlement program 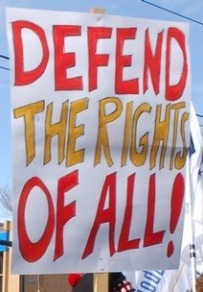 (March 5) – On February 28 the government of Canada announced that as of that date 25,323 Syrians have been brought to Canada as refugees and been given permanent resident status, meeting the Liberals’ own February 29 deadline. Of those 14,418 were government-assisted refugees (GARs). Meanwhile, 2,179 were Blended Visa-Office Referred (BVOR), meaning the government will provide support for the first six months, following which private sponsors will provide support for another six months. The remaining 8,726 were completely privately sponsored.[1]

END_OF_DOCUMENT_TOKEN_TO_BE_REPLACED

The program to resettle Syrian refugees in Canada (2): Defend the rights of all 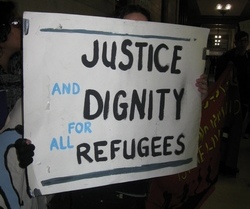 As of February 28 more than 25,000 Syrian refugees have come to Canada. A little over half came as government-assisted refugees with the rest having private or semi-private sponsorship. A recent issue of TML Weekly features a call from the Communist Party of Canada (Marxist-Leninist) for working people to be vigilant and make sure their rights are defended in the context of defending the rights of all. We are posting the full text below. END_OF_DOCUMENT_TOKEN_TO_BE_REPLACED

The program to resettle Syrian refugees in Canada (1): Canada accepts US veto

In an interview with the CBC, U.S. President Barack Obama’s national security adviser, Susan Rice confirmed that Canada used the U.S. biometrics system to screen each of the 25,000 Syrian refugees that came to Canada. “What we would do is share with our Canadian colleagues the info that we have uncovered and allow them to make judgments based on that,” said Rice. In this case the judgement was to automatically exclude that refugee. END_OF_DOCUMENT_TOKEN_TO_BE_REPLACED

CNN punished journalist for fulfilling a core duty of journalism

CNN yesterday suspended its global affairs correspondent, Elise Labott, for two weeks for the crime of posting a tweet critical of the House vote to ban Syrian refugees. Whether by compulsion or choice, she then groveled in apology. This is the original tweet along with her subsequent expression of repentance:

CNN journalist Elise Labott has been suspended by the network for two weeks for tweeting a message of disappointment on Thursday after US lawmakers passed a bill that would restrict the influx of Syrian refugees.

END_OF_DOCUMENT_TOKEN_TO_BE_REPLACED 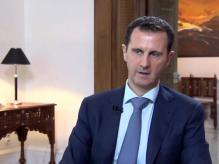 There are many issues which need to be raised; and in this interview, I’ll raise a number of them. I hope that I’ll get candid and transparent answers from your Excellency. For about five years now, Syria has been suffering from a war waged by armed terrorist groups that inflicted tremendous damage on the Syrian people. According to available statistics, these damages are estimated at more than USD 200 billion to the infrastructure, about 250,000 casualties and about six to seven million displaced Syrian individuals. All this was the result of Western states’ insistence on overthrowing the Syrian regime. They haven’t succeeded in doing so. Now we can see a change in positions regarding the situation in Syria. The states which used to call for overthrowing the regime have started to declare that they accept President Assad’s participation in an interim government. What’s your reading of this change in positions, and why has it happened? END_OF_DOCUMENT_TOKEN_TO_BE_REPLACED

Word. ‘West crying for refugees with one eye, aiming gun with the other’ – President Assad of Syria

In a rare interview with Russian media outlets on September 18, 2015, RT among them, Syrian leader Bashar Assad spoke about global and domestic terrorism threats, the need for a united front against jihadism, Western propaganda about the refugee crisis and ways to bring peace to his war-torn nation.

END_OF_DOCUMENT_TOKEN_TO_BE_REPLACED

(Renewal Update) – The Syrian Arab Association of Canada held a successful rally at the Human Rights monument in Ottawa on Sunday, September 13. It called for Canada to welcome Syrian refugees, for an end to U.S. and Canadian bombing of Syria and for the restoration diplomatic and economic relations with the Syrian government.
END_OF_DOCUMENT_TOKEN_TO_BE_REPLACED