The U.S.-Canadian collaboration in supporting terrorism is being heroized. In another stunning revelation of the foreign links to the extremists in Syria, the U.S.-led Halifax war conference opening today “will offer delegates an off-the-record session with Raed Al Saleh, co-founder of Syria Civil Defence, a group of volunteer rescue workers better known as the White Helmets” (emphasis added). END_OF_DOCUMENT_TOKEN_TO_BE_REPLACED

White Helmets smuggled out of Syria by Israel for resettlement in Canada, other NATO countries | MARGARET VILLAMIZAR

After four years of financing and promoting the White Helmets, a U.S./NATO front for foreign intervention and regime change in Syria, NATO arranged for the Israeli military to evacuate 98 of its assets and their families from Syria on the weekend of July 21-22. The evacuation took place as Syrian government forces were liberating the last remaining pockets of terrorist-controlled territory in the southwest of the country. This should leave little doubt in anyone’s mind as to whose interests the so-called humanitarian rescue group serves. END_OF_DOCUMENT_TOKEN_TO_BE_REPLACED 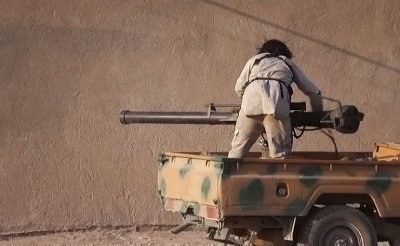 A London Guardian article from February 6, 2018, titled “Biggest airstrikes in a year hit Syria after rebels shoot down Russian jet” claims that “Russian and Syrian jets have bombed up to 18 towns across north-west Syria, devastating civilian areas and forcing fresh waves of refugees to flee.” According to journalists Martin Chulov and Kareem Shahee, a series of devastating airstrikes have been carried out in the northwest of Idlib province. “Nine people were treated for symptoms of chlorine exposure after a bomb was dropped on the town of Saraqeb by a helicopter”, they claim. [In Canada, similar articles have been disseminated by the Toronto Globe and Mail (see here, among others) and the Toronto Star (see here, among others).]  Inside Syria Media Center has tried to get to the bottom of the adequacy of this information and determine whether it is credible. END_OF_DOCUMENT_TOKEN_TO_BE_REPLACED

On December 6, the government of Canada announced it would begin financing the group called the “White Helmets” to the tune of $4.5 million dollars. The Trudeau government has taken this “Syria Civil Defence” group under its wing as part of Canada’s “peacemaking” in Syria. The funds come from its “Peace and Stabilization Operations Program.” The same day, Stéphane Dion, Minister of Foreign Affairs, and Howard Drake, British High Commissioner to Canada, announced that six public events would be held across Canada from December 7 to 13 featuring figures associated with the group. END_OF_DOCUMENT_TOKEN_TO_BE_REPLACED

He who plunders … always lives in terror

At the initiative of the “Syria Campaign”, some communalist organizations in Canada linked with the Trudeau government are supporting terrorist forces in Syria. On October 1st, in the wake of the U.S. war crimes in Deir Ezzor and Aleppo, they held a small rally on Parliament Hill in Ottawa as part of an international campaign orchestrated from the United States. A similar rally was held in Calgary. Posing as a non-political solidarity organization, the “Syria Campaign” leverages local partners and media contacts to push the U.S. into more aggressively toppling another Middle Eastern government | MAX BLUMENTHAL*

(October 3) – On September 30, demonstrators gathered in city squares across the West for a “weekend of action” to “stop the bombs” raining down from Syrian government and Russian warplanes on rebel-held eastern Aleppo. Thousands joined the protests, holding signs that read “Topple Assad” and declaring, “Enough With Assad.” Few participants likely knew that the actions were organized under the auspices of an opposition-funded public relations company called the Syria Campaign.

END_OF_DOCUMENT_TOKEN_TO_BE_REPLACED

A wide-ranging disinformation campaign as part of U.S. efforts at regime change in Syria has resulted in calls, including from within Canada, to nominate an unsavoury group for the Nobel Peace Prize. The group is called the “White Helmets” or “Syria Civil Defence.”

The “White Helmets” were founded in 2013 by James Le Mesurier, a British private military contractor, consultant for the UK Foreign Office and former military intelligence officer, when the governments of the U.S. and UK funded select individuals in rebel-held territory in Syria to travel to Turkey to allegedly receive training in rescue operations. The White Helmets group is supported by a foundation started by Le Mersurier called Mayday Rescue which operates out of the Netherlands, Dubai, Jordan and Turkey. END_OF_DOCUMENT_TOKEN_TO_BE_REPLACED

The U.S. government, via its CIA, has financed the “moderate” anti-Syrian mercenaries fighting against the legitimate Syrian government with at least $1 billion a year. The Wahhabi dictatorships in the Middle East have added their own billions to finance al-Qaeda’s efforts against the Syrian people. The U.S. continues to purchase and transport thousands of tons of weapons and ammunition to feed the war against the Syrian people. It also pays the various fighters and opposition groups. The U.S. efforts for regime change in Syria have been running since at least 2006 when the U.S. government started to finance anti-Syrian exile TV stations and held intensive planning talks with various anti-Syrian Islamist elements. END_OF_DOCUMENT_TOKEN_TO_BE_REPLACED