A 2008 document, leaked by whistleblower Edward Snowden, says the British were concerned about Israel’s stance on Iran. GCHQ also spied on Israeli diplomats, and defence firms.

British intelligence spied on Israeli diplomats and firms in addition to its military, the French daily Le Monde reported on Wednesday, based on leaked documents that came into the possession of whistleblower Edward Snowden. In one of the files, Britain’s GCHQ intelligence-gathering apparatus defined Israel as “a true threat” to the Middle East. END_OF_DOCUMENT_TOKEN_TO_BE_REPLACED

The letter points out, among other things, the history of U.S. intelligence agencies conducting espionage against foreign companies, with Canadian collusion and complicity. It points out that reports of Canadian intelligence’s predatory spying on trading partners has already had negative implications for business. END_OF_DOCUMENT_TOKEN_TO_BE_REPLACED

The CIA in Latin America: From coups to torture and preemptive killings 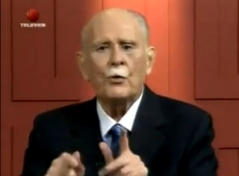 (Jan. 22) – The observations made by the Venezuelan journalist José Vicente Rangel are generally regarded as well informed and accurate. For the television program Los Confidenciales («Reliable Sources») he recently reported on the work of the supplemental staff at CIA stations in Latin America. According to Rangel, at least 500 reinforcements have arrived at the US Embassy and other US headquarters in South America in order to help the other operatives escalate their subversive and espionage activities.

END_OF_DOCUMENT_TOKEN_TO_BE_REPLACED

(Nov. 12) – The New York Times has published an unredacted version of the infamous “suicide letter” from the FBI to Dr. Martin Luther King, Jr. The letter, recently discovered by historian and professor Beverly Gage, is a disturbing document. But it’s also something that everyone in the United States should read, because it demonstrates exactly what lengths the intelligence community is willing to go to—and what happens when they take the fruits of the surveillance they’ve done and unleash it on a target. END_OF_DOCUMENT_TOKEN_TO_BE_REPLACED

Documenting darkness: How the US thug state operates

TomDispatch.com (Feb. 20) – HERE, at least, is a place to start: intelligence officials have weighed in with an estimate of just how many secret files National Security Agency contractor Edward Snowden took with him when he headed for Hong Kong last June. Brace yourself: 1.7 million.  At least they claim that as the number he or his web crawler accessed before he left town.  Let’s assume for a moment that it’s accurate and add a caveat.  Whatever he had with him on those thumb drives when he left the agency, Edward Snowden did not take all the NSA’s classified documents.  Not by a long shot.  He only downloaded a portion of them.  We don’t have any idea what percentage, but assumedly millions of NSA secret documents did not get the Snowden treatment. END_OF_DOCUMENT_TOKEN_TO_BE_REPLACED

‘Secrets for sale’ and the Snowden affair: The Greenwald-Omidyar-NSA connection

Despite what Time Magazine would have us believe, there is no doubt that the most influential newsmaker of the year has been Edward Snowden, a former CIA employee and NSA subcontractor who at the age of 29 became the unlikely center of global attention with his release of documents allegedly detailing the inner workings of various NSA spying programs.

Of the many intriguing aspects of this story, by far one of the most frustrating is that, other than a few interviews and press conferences, almost everything we know about Snowden, his motivations, and the documents themselves come from intermediaries who have found themselves in the position of spokespeople on the case. END_OF_DOCUMENT_TOKEN_TO_BE_REPLACED

Der Spiegel: Fresh leak on US spying – NSA accessed Mexican president’s email (full text see below). Another disclosure from former CIA agent Edward Snowden has revealed that, as part of its global spy network against the nations and peoples of the world, the United States has been eavesdropping on the Mexican government for years – in particular former President Felipe Calderon, whose email messages have been targeted. According to the report, the spying into the email server of the “Mexican Presidencia domain” contained “diplomatic, economic and leadership communications” that allowed for “deep insight into policymaking and the political system.” An NSA division for “particularly difficult missions” called the “Tailored Access Operations” handled the operation.  The covert operation was carried out in conformity with an April 2013 list that enumerates the US’ surveillance priorities. That list, classified as “secret,” was authorized by the White House and “presidentially approved,” according to internal NSA documents, Der Siegel reports. END_OF_DOCUMENT_TOKEN_TO_BE_REPLACED

The U.S. state is the biggest hacker in the world and practitioner of cyberwarfare

Washington Post (Oct. 15) – THE National Security Agency is harvesting hundreds of millions of contact lists from personal e-mail and instant messaging accounts around the world, many of them belonging to Americans, according to senior intelligence officials and top-secret documents provided by former NSA contractorEdward Snowden.

The collection program, which has not been disclosed before, intercepts e-mail address books and “buddy lists” from instant messaging services as they move across global data links. Online services often transmit those contacts when a user logs on, composes a message, or synchronizes a computer or mobile device with information stored on remote servers. END_OF_DOCUMENT_TOKEN_TO_BE_REPLACED

“I would like to announce that we are preparing a lawsuit against Barack Obama to condemn him for crimes against humanity,” President Morales said at a press conference in the Bolivian city of Santa Cruz. He branded the US president as a “criminal” who violates international law. END_OF_DOCUMENT_TOKEN_TO_BE_REPLACED