The unreported ‘Battle for Kyiv’ (1)

A subhuman with a gun given to him by the authorities. The day robberies, looting and fratricidal violence were unleashed in Ukraine | DMITRY KOVALEVICH*

(Exclusive) – On Friday, February 25, the authorities of a number of cities in Ukraine began distributing weapons to civilians to fight Russian troops which, in fact, were often used for completely different purposes.

END_OF_DOCUMENT_TOKEN_TO_BE_REPLACED

Ukraine: The inter-imperialist rivalry between the Biden presidency and rich local oligarchs

Over the past 30 years, Ukraine’s independence has had two main pillars – the administrations of the United States/UK/Canada and the Ukrainian oligarchs, who defended their assets looted in the 1990s. Both these pillars have actively promoted their deputies to the Ukrainian parliament, as well as financing ultranationalist organizations and their media. And right now, a struggle is flaring up between the two pillars.

END_OF_DOCUMENT_TOKEN_TO_BE_REPLACED

State funeral of a former SS in Kiev

Ukrainian President Volodymyr Zelensky was represented by soldiers from his personal regiment, who paid the last respects to the one who served alongside Nazi Germany. Defence Minister and former military attaché in Washington, Lieutenant General Andriy Taran, was also represented. The coffin of the former SS was covered with the Ukrainian national flag.

END_OF_DOCUMENT_TOKEN_TO_BE_REPLACED

Anthony Blinken and Victoria Nuland visited Kiev in May for multiple reasons. What has unfolded in Ukraine as a result? Protesters are increasingly holding rallies in front of the US embassy, having realized on whom the solution of their problems depends | Dmitriy Kovalevich
__________________________________

(June 1) – For Ukrainian politicians, the month of May was kicked off with the visit of Anthony Blinken and Victoria Nuland to Kiev. The same Victoria Nuland who in 2014 supported ultra-right nationalists on the Maidan and became known amongst Ukrainians for distributing cookies.

END_OF_DOCUMENT_TOKEN_TO_BE_REPLACED

Ukraine Update: Crackdown on media and opposition to please Biden

The Biden administration in the US appears to be impacting on Ukraine’s presidential policy, which in turn is negatively affecting the country’s opposition and opposition media, while nationalism and militarism are increasing | Dmitriy Kovalevich 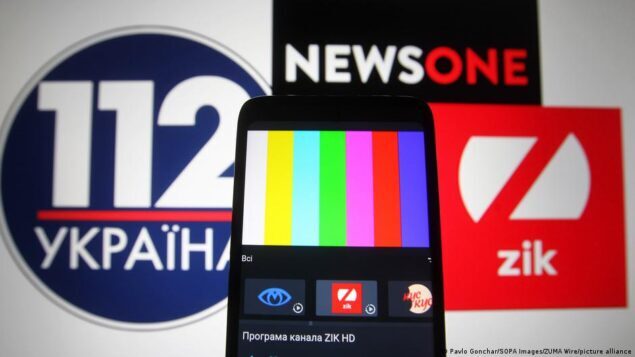 END_OF_DOCUMENT_TOKEN_TO_BE_REPLACED

Dmitriy Kovalevich’s update on the local elections in Ukraine and US embassy pressure to impose media censorship in Ukraine. “The bill on media, which the U.S. embassy is promoting, should make it easier to block unwanted websites and TV channels.”
____________________________

In early September, US strategic B-52 bombers, capable of carrying a nuclear weapon, flew over Ukraine for the first time[1]. Flying from the US military base in the UK, they proceeded via the Volyn region (western Ukraine) towards the Crimea, although they did not cross its borders. Nevertheless, the Russians raised the alarm and sent fighters out to intercept the “flying fortresses.” END_OF_DOCUMENT_TOKEN_TO_BE_REPLACED

Ukraine Update: A year of broken promises in Ukraine and Biden’s corruption affair

A year has passed since Vladimir Zelensky became president of Ukraine. Twelve months ago, three quarters of the country’s electorate voted for him; optimistically, they associated him with being able to reboot the country’s political power. Voting for Zelensky was essentially a protest vote. People were casting their votes against the nationalist Maidan government and the main requirement was to hold to account corrupt officials and war criminals from the coterie of ex-president Petro Poroshenko. The focus of Zelensky’s campaign was a promise to hold them responsible. “I am your sentence,” the young actor boldly declared to the ex-president. END_OF_DOCUMENT_TOKEN_TO_BE_REPLACED

(March 27) – The Prosecutor General Office of Ukraine reportedly plans to arrest two prominent recent members of the parliament and far right activists on charges of their involvement in the Maidan massacre. END_OF_DOCUMENT_TOKEN_TO_BE_REPLACED

During the month of March, Ukraine has faced serious political crises, accompanied by economic troubles and the COVID-19 outbreak. The Cabinet of Ministers resigned in early March, under a barrage of harsh criticism for its ineptitude in dealing with the country’s economic problems. END_OF_DOCUMENT_TOKEN_TO_BE_REPLACED

Ukrainegate: The conflict in Ukraine, which started with US involvement, backfires into US politics and can damage both the current US president and his top challenger

How did a comedian-turned-President end up contributing to the beginning of a process of impeachment, so talked about but fairly rare in US politics? Feel free to expand in whichever direction you want.

The president of Ukraine and Ukraine overall are just playing cards in the US politics in the case of the impeachment process. The Democratic Party started playing this card after its hopes to impeach Donald Trump using the Russiagate scandal failed after the Mueller investigation did not prove Trump collusion with the Russian government and a conspiracy theory that Trump is a Russian agent was also debunked. The whistleblower report about the call between Volydmyr Zelensky and Trump was used to initiate impeachment proceedings even before the transcript of this call was made public. END_OF_DOCUMENT_TOKEN_TO_BE_REPLACED

The 12.7 mm bullet that killed the Ukrainian opera singer Vasyl Slipak [Zelensky retold this story during the UN session, hence why he has a bullet in his hand – ed] costs $10. It, in general, is correct that the price is given in dollars. Because the country that produces these dollars has a direct bearing on everything that is happening in Ukraine now. END_OF_DOCUMENT_TOKEN_TO_BE_REPLACED

Five years have passed since that memorable day when on June 2, 2014 an attack jet of the Armed Forces of Ukraine struck a blow on the building of the Lugansk regional state administration. It wasn’t the first episode of the use of aviation in the civil war in Donbass. Military jets passed at low heights and broke the sound barrier over the residential quarters of the cities, intimidating the population. END_OF_DOCUMENT_TOKEN_TO_BE_REPLACED

By DOUGAL MACDONALD with an update by TONY SEED

The 2019 Ukrainian presidential election was held on March 31 and April 21 using the two-round system. A surprising total of 39 candidates ran for president on the ballot. Since entry into the campaign costs a non-refundable $90,000, speculation was rampant that some candidates were nothing more than straw men put forward by various factions of the rich simply to drain votes away from their opponents. END_OF_DOCUMENT_TOKEN_TO_BE_REPLACED