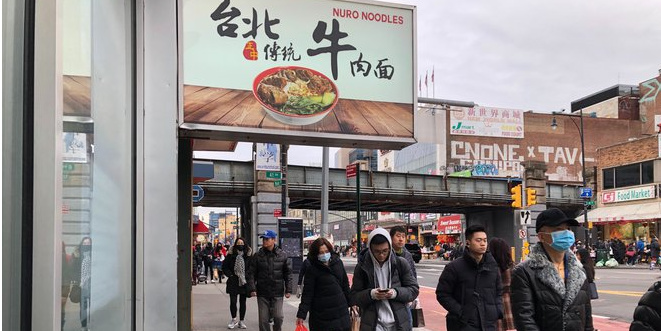 Gothamist photo (1/31/20) of Asian Americans wearing surgical masks, illustrating a story about the absence of coronavirus (at that point) in New York City.

As an Asian-American, I’m not surprised that there are numerous reports surfacing of racist and xenophobic responses arising in the US (and elsewhere) as a result of the coronavirus outbreak, where “coughing while Asian” is being compared to “driving while black.” In case there are any doubts that media coverage is being racialized, reports about new coronavirus updates in the US, particularly in areas like New York City, are using unrelated header images of East Asian people wearing face masks to drive the impression that Chinese people are unique carriers of disease, even when they aren’t Chinese. END_OF_DOCUMENT_TOKEN_TO_BE_REPLACED

US monopoly media constructed a false symmetry of violence where none existed. The manipulation of facts included ABC World News presenting photos of a Palestinian family as Israelis. Or the Hamas “strategy to get its own children killed” that was “forcing [Israel] to kill their children.” PETER HART of FAIR*

Striving for a deceptive “balance,” US media miscast the devastating violence of Israel’s attacks on Gaza and obscured the lopsided nature of the death toll.

This started with the timeline preferred in much of the press. By most media accounts, the conflict started when three Israeli teenagers were kidnapped on June 12; their bodies were discovered on June 30. The Israeli government immediately declared Hamas responsible. Days after the discovery of the victims’ bodies, a Palestinian teenager was abducted and murdered by Israeli extremists, in what was called a “revenge” attack. Hamas rockets started falling in Israel, and “Operation Protective Edge” was Israel’s response. END_OF_DOCUMENT_TOKEN_TO_BE_REPLACED

To a startling degree, when you see discussions about the economic policies of other countries in the US press, you’re reading fantasy stories about imaginary lands where peoples are rewarded or punishment according to their adherence to the free market faith, writes Jim Naureckas*, FAIR. Whether it is Venezuela, Cuba or Iran you can read articles about how the economy is in shambles. Every year. In fact, the economy of any country that stands up to the US happens to be in shambles.

(Jan. 14) – FAREED ZAKARIA presented what he called “another installment of ‘How to Ruin Your Economy in Five Easy Steps’” on his GPS show on CNN(1/12/14): “Last time, Venezuela ticked off all the boxes, but we found another country that is following the same sad path.”

That country was Argentina, which Zakaria criticized for following Venezuela’s lead in “attacking big business,” allowing “restrictions on global trade” and so forth – the basic neoliberal critique of developing economies. Zakaria ends with the moral: END_OF_DOCUMENT_TOKEN_TO_BE_REPLACED