The Balfour Declaration’s purpose was to form a “little loyal Jewish Ulster in a sea of potentially hostile Arabism”, according to Ronald Storrs, “the first military governor of Palestine since Pontius Pilate” (his words). Not everything went to plan… | DAVID CRONIN*

“The Birth of the Irish Republic” by Walter Paget

Sometimes a fragment reveals more than a tome. Karma Nabulsi, a politics professor at Oxford University, introduced me to one such fragment. Did I know, she asked, that Winston Churchill sent the Black and Tans to Palestine?

That conversation helped me grasp why Irish people tend to feel a sense of affinity with the Palestinians. Our historical experiences are not identical but they do have striking parallels, which I became eager to explore.

This year marks the centenary of the Balfour Declaration. The November 1917 letter to the Zionist movement committed Britain to support the establishment of a “Jewish national home” in Palestine. Through that document, the world’s pre-eminent power gave its backing to a project aimed at colonising with Europeans a land where most of the population was Arab.

Arthur James Balfour, then Britain’s foreign secretary and the declaration’s signatory, had previously served as chief secretary of Ireland. He was best known for ordering police to open fire on an 1887 land reform protest in Mitchelstown, Co Cork. Resulting in three deaths, the incident earned him the sobriquet Bloody Balfour. 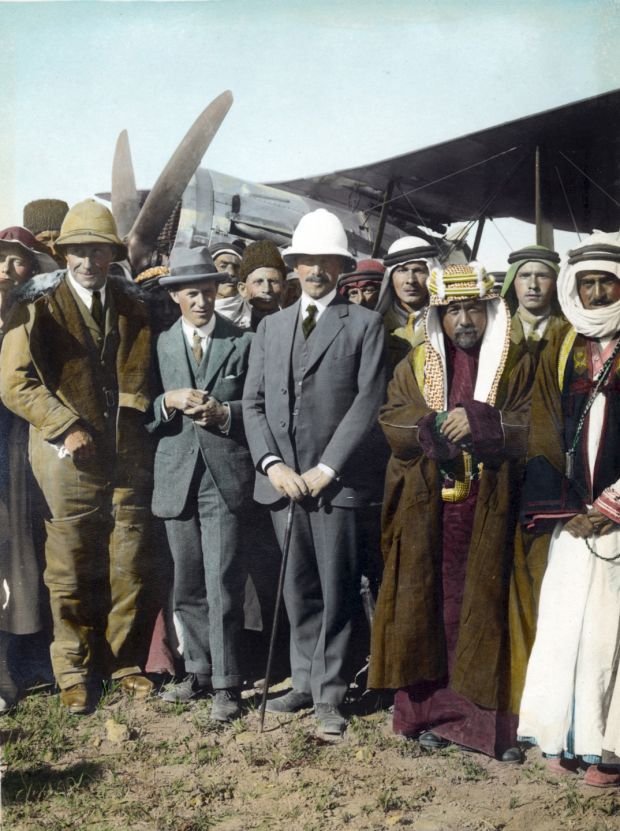 Balfour was among many British political figures to leave a deep impression on both Ireland and Palestine. As home secretary in 1916, Herbert Samuel oversaw the internment of almost 2,000 people allegedly involved in the Easter Rising; he also approved Roger Casement’s hanging. Samuel became the first high commissioner of Palestine as Britain took charge of its administration between the two world wars.

An IRA platoon, known as a “flying squadron”. Units like this waged a war of independence against local British authorities between 1919 and 1921.

The Irish War of Independence ran from January 1919 to July 1921. It was a guerrilla campaign pitching 15,000 members of the IRA against a British constabulary and army force totalling 42,000. Nearly 2,000 people died as a result – 750 of them civilians. The conflict had its origins in the election of December 1918 when the Irish republican party, Sinn Fein, won a landslide victory and then established a breakaway parliament free of British control. The move precipitated the first attack on Crown forces on Jan. 21, 1919 resulting in the deaths of two policemen. The killings touched off a spiralling war of attrition pitching the IRA and a supportive citizenry against the might of the British Empire, resulting in a treaty and the formation of the Irish Free State almost two years later. | WikiCommons

Faced with unrest in 1921, Samuel ordered air strikes against Palestinian rioters and declared a state of emergency. At that juncture, Churchill, then colonial secretary, advocated that a “picked force of white gendarmerie” be established for Palestine, according to official records. Churchill’s idea was that the gendarmerie should be comprised of men who had served with crown forces during Ireland’s War of Independence.

Henry Hugh Tudor, commander of the Auxiliaries in Ireland, had advised Churchill that up to 800 “absolutely reliable men” could be made available from those forces. The Auxiliaries had worked alongside the Black and Tans and the two policing divisions were often regarded as synonymous. The gendarmerie founded at Churchill’s initiative contained members of both.

The aftermath of a Black and Tan raid on Cork, December 1920 | WikiCommons

Members of the British “Black and Tans” constabulary force detain a suspected IRA operative. Paramilitary auxiliaries were ruthless in their efforts to crack down on the republicans. Many Irish civilians became targets during the two-year conflict.

In effect, then, the Black and Tans and the Auxiliaries were assigned to Palestine once their presence in Ireland was no longer deemed necessary. The parallel fascinated me. One of those forces’ most notorious escapades occurred in my hometown – Balbriggan, Co Dublin. As revenge for the killing of a police officer by republicans in September 1920, the forces torched a hosiery factory that was a major local employer, as well as destroying and damaging numerous pubs and houses. The “sack” of Balbriggan, as the incident became known, prompted a Westminster debate about whether the crown forces lacked discipline.

Britain’s imperial archives show that some diplomats asked if the “Black and Tan tradition” was being followed in Palestine. One briefing document apparently written for the British Army pointed to how many members of the Churchill-initiated gendarmerie had formerly been based in Ireland. “This original composition gave the force a military efficiency, combined with a certain ruthlessness,” the paper added.

Douglas Duff had been stationed with the Black and Tans in Galway before moving to Palestine. His memoirs make clear that he brought a great deal of bigotry with him. Referring to the Palestinians of Haifa, he wrote: “Most of us were so infected by the sense of our own superiority over these ‘lesser breeds’ that we scarcely regarded these people as human.”

Officers who had served in Ireland played a prominent role in quelling protests by Palestinians against the expropriation of land where they lived and farmed. Raymond Cafferata, for example, had been part of the Auxiliaries during the Irish War of Independence. In 1933, he headed a contingent of foot police at a Jaffa demonstration (pictured below) which had been banned. A baton charge that he ordered was commended by British administration in Jerusalem for being “magnificently executed” despite how numerous Palestinians were shot dead during the protest.

Later in the 1930s, a full-scale Palestinian revolt erupted. Grattan Bushe, a legal adviser to the Colonial Office, warned that “repression by force is repeating the mistake which was made in Ireland”. His warning was ignored; military commanders were assured that they could take “whatever measures are necessary”. The measures were to include demolishing much of Jaffa’s old city, imposing collective punishment on villages with rebels in their midst and mass detention in labour camps.

Some of the men behind projects that are still reviled today were originally from Ireland. About £2 million – a huge sum for the 1930s – was spent on erecting a rampart along Palestine’s northern frontier. It was the brainchild of Charles Tegart, a Derry-born police chief. Tegart was something of an innovator. He recommended that the most sophisticated surveillance technology of that era should be installed in “Tegart’s fence”, as the project was dubbed.

Map of “Tegart’s Wall”, actually a barbed wire fence, Palestine 1938–1940. With time the security system further included police forts, smaller pillbox-type fortified positions, and mounted police squads patrolling along it. Built with the assistance of the French colonialists, who controlled Lebanon, it was applauded by TIME as an “ingenious solution for handling terrorism in Mandatory Palestine.’ | Survey of Palestine – Map prepared for the Survey of Palestine, 1944.

The Balfour Declaration’s purpose was to form a “little loyal Jewish Ulster in a sea of potentially hostile Arabism”, according to Ronald Storrs, “the first military governor of Palestine since Pontius Pilate” (his words). Not everything went to plan: the Zionist movement fell out with and, in the case of two groups, waged a campaign of guerilla warfare against Britain in the 1940s. Storrs’ comment nonetheless encapsulates how the British elite viewed their nearest colony and the Middle East through the same lens.

*David Cronin is an associate editor of The Electronic Intifada. His latest book is Balfour’s Shadow: A Century of British Support for Zionism and Israel (Pluto, 2017).

Note: Most photos and captions have been added by TS.