Venezuela’s response to US interference

The following statement was issued by the Government of Venezuela on July 25, 2017.

The Bolivarian Republic of Venezuela categorically rejects the declarations of the Director of the Central Intelligence Agency of the United States, Michael Pompeo, and denounces before the international community the systematic attacks against Venezuela from the USA, including: END_OF_DOCUMENT_TOKEN_TO_BE_REPLACED

Members of the Organization of American States (OAS) have once again failed to reach a consensus to “take action on Venezuela,” TeleSur reported on July 26. END_OF_DOCUMENT_TOKEN_TO_BE_REPLACED

On Sunday, July 30, the people of Venezuela will elect a National Constituent Assembly. Nearly 20 million Venezuelans will choose from 6,120 candidates representing diverse sectors of society and areas of the country to represent them. Their aim is to consolidate the Bolivarian political process so as to resolve the country’s problems peacefully and end the foreign-inspired violence and interference in the country’s internal affairs. END_OF_DOCUMENT_TOKEN_TO_BE_REPLACED

Recent US actions against Venezuela

Rally in support of the Venezuelan people and against Canadian government’s intervention, May 13, 2017.

I. On July 26th, the Office of Foreign Assets Control of the U.S. Department of the Treasury added 13 Venezuelan high-level officials to the OFAC’s SDN List, as part of a new set of unilateral sanctions against the Bolivarian Republic of Venezuela.

“At any time you have a country as large and with the economic capacity of a country like Venezuela, America has a deep interest in making sure that it is stable, as democratic as possible. And so, we’re working hard to do that, I am always careful when we talk about South and Central America and the CIA, there’s a lot of stories. (Laughter) END_OF_DOCUMENT_TOKEN_TO_BE_REPLACED

Elections for a National Constituent Assembly are being held in Venezuela on July 30th. Here are some common questions — with the answers — that are being asked about the Assembly.

What is a National Constituent Assembly (ANC), under Venezuelan law? END_OF_DOCUMENT_TOKEN_TO_BE_REPLACED

Federal government marches further into dead end of nation-wrecking. The working class is determined to affirm its right to build the new! Report from WORKERS’ FORUM

Transport Canada has announced another $2.1 billion of state funds for the Trade and Transportation Corridors Initiative to serve the global oligopolies and their control of the Canadian and international economy.[1]

A Ministry press release on July 4 states the Trade and Transportation Corridors Initiative is “[to] build stronger, more efficient transportation corridors to international markets…. Canadian businesses will be able to better compete, grow and create even more jobs well into the future.” END_OF_DOCUMENT_TOKEN_TO_BE_REPLACED

The situation in Jerusalem/ Al-Quds, in Gaza, in Palestine is very grave and only getting worse. The relentless brutality against Palestinians and the latest aggression in Al-Quds are in total defiance to international laws and United Nations resolutions.

This Saturday (July 29), we take to the streets to show our outrage at the failure of the Canadian government to speak out and to let people know things are not OK as media might portray. Most importantly, we show oppressed and heroic Palestinians fighting with their lives that they are not alone. They need to see our support.

We must speak up! Silence is not an option!

Across from the Israeli Consulate
At Queen’s Park & Bloor St. at the Royal Ontario Museum (ROM) 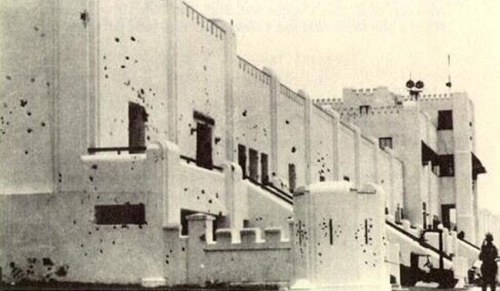 The Moncada Barracks shortly after the July 26, 1953 attack. The barracks have been converted into a school and Museum of the Revolution where the bullet holes shown here can be seen to this day.

Affirming history, independence and the cause of peace and justice

On July 26, 1953, a group of courageous young men and women — led by Fidel Castro — attacked the Moncada Barracks in the city of Santiago de Cuba, and the Carlos Manuel de Cespedes Barracks in Bayamo, in an attempt to overthrow the U.S.-supported puppet dictator Fulgencio Batista. As the island’s second largest military garrison, the Moncada Barracks was critical to Batista’s military control of southern Cuba. The goal was to seize the weapons and distribute them to the people and spark a national uprising that would not only overthrow the Batista dictatorship but also establish Cuba’s independence and sovereignty. This heroic act is annually commemorated all over Cuba as the beginning of the movement and struggle that laid the foundation of the Cuban Revolution. END_OF_DOCUMENT_TOKEN_TO_BE_REPLACED

Venezuela’s response to US interference

The following statement was issued by the Government of Venezuela on July 25, 2017.

The Bolivarian Republic of Venezuela categorically rejects the declarations of the Director of the Central Intelligence Agency of the United States, Michael Pompeo, and denounces before the international community the systematic attacks against Venezuela from the USA, including: END_OF_DOCUMENT_TOKEN_TO_BE_REPLACED

Celebrate Cuba’s National Day of Rebellion!
On July 26, 2017 the Cuban people celebrate the 64th anniversary of the historic attack on the Moncada and Carlos Manuel de Céspedes Barracks by the revolutionary youth. In appreciation of the Cuban revolution and all which it has contributed to humanity, come out and celebrate Moncada Day!
We will be showing the inspiring film, Community Doctors – Official Documentary of ELAM, followed by discussion.
— Community Doctors —
Official Documentary of ELAM, Cuba’s Latin American School of Medicine
6pm, Wednesday, July 26, Room 301, Halifax Central Library
Sponsored by: Nova Scotia Cuba Association and Canadian Network On Cuba
Moncada Day 2017 poster

The media and the fear factor: Conning Canadians and demonizing Indigenous People

From the Atlantic to the Pacific, the Indigenous Nations are fighting for their rights, identity, land and resources. The assault by the state at all levels in collusion with the monopoly media on the Indigenous peoples is an assault on the democratic rights all Canadians, as sovereigntist leaders have been warning for years. “The Indigenous people are the canary in the coal mine.” – TS

Activists hold 600-strong rally in Halifax on July 15, 2017 as the statue of Cornwallis is covered with black cloth.

(July 15) – TML Weekly applauds the people of Nova Scotia who organized the “Removing Cornwallis” Activities in Halifax this July 15. One of their demands is to rename the Cornwallis Genocide Park to the Halifax Peace and Freedom Park. END_OF_DOCUMENT_TOKEN_TO_BE_REPLACED

Patriots who refused to conciliate with the Crown after the defeat of the rebellion faced death or deportation. In the drawing above a British officer reads the order of expulsion, to which the Patriots clench their fists and cry out, “Treachery!”

On May 17, the federal government, through Parks Canada, announced the kick-off of Canada 150 celebrations at Manoir Papineau in the town of Montebello in the Outaouais, named after Louis-Joseph Papineau who betrayed the Patriots. We often hear of those who betrayed the revolutionary movement of the Patriots of 1837-38 and accepted “reasonable accommodation” with the Crown after the Rebellion was brutally crushed. The “reasonable accommodation” allowed them access to positions in the government and the institutions to defend their own right to private property and even to the seigneurial rights they enjoyed under the French regime. They reconciled with power not to defend and pursue the struggle for recognition of the Republic as is often claimed, but to defend the British monarchy and its institutions which betrayed and continue to usurp the right of the people to be sovereign. END_OF_DOCUMENT_TOKEN_TO_BE_REPLACED

Since 2008, Mi’kmaq leader Keptin John Joe Sark, a member of the Mi’kmaq Confederacy of Prince Edward Island has been demanding that the PEI government take action to have the name of Jeffrey Amherst – a notorious British General responsible for distributing blankets infected with smallpox amongst the Mi’kmaq and other Indigenous peoples in the 18th Century – removed from the historic site at Port-la-Joye at Rocky Point, across the harbour from Charlottetown. END_OF_DOCUMENT_TOKEN_TO_BE_REPLACED

On November 21, 2009 some 200 people gathered in a rally in Cornwallis Park to oppose the inaugural Halifax International Security Forum (HISF), a warmongering agency based in Washington, DC and funded by the Department of National Defence and Atlantic Canada Opportunities Agency. They took the collective decision to rename it Peace and Freedom Park as their very first act, an act carried out in consultation with Mi’kmaq elders such as acclaimed historian Dan Paul.

They covered the statue of Edward Cornwallis with a white sheet. The anti-war rally was organized by an ad hoc committee consisting of activists from different affiliations and background, which became No Harbour for War. END_OF_DOCUMENT_TOKEN_TO_BE_REPLACED 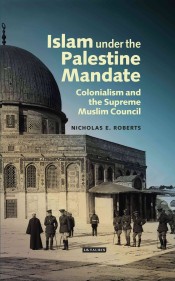 In the dangerous and inaccurate popular narratives on Palestine, religion – a black-and-white tale of Islam versus Judaism – is often given priority of importance. Religious identities are taken as the simple, unquestioned driving force behind the actions of Palestinians throughout history.

A closer look, of course, reveals the flaws in this image. During the Ottoman period, the people of Palestine might have been more likely to identify themselves in terms of their family, neighbourhood, city or profession, depending on which identity the situation called for at a particular time. END_OF_DOCUMENT_TOKEN_TO_BE_REPLACED

How Britain brought waterboarding to Palestine

END_OF_DOCUMENT_TOKEN_TO_BE_REPLACED

Make Canada a factor for peace, not war and aggression!

July 1 is the 150th anniversary of the establishment of the Canadian confederation through Royal Proclamation. On this occasion we encourage everyone to together affirm that we want Canada to be a force for peace in the present and future, not an instrument of colonial domination, war and empire as has been the case for the last 150 years. END_OF_DOCUMENT_TOKEN_TO_BE_REPLACED

From top to bottom, the USS Dwight D. Eisenhower, the USS Winston S. Churchill and the HMCS Moncton conduct what the U.S. Navy terms a photo exercise, on the way into the harbour of Halifax, June 27, 2017.

“The U.S. nuclear aircraft carrier USS Dwight D Eisenhower and two support ships are arriving today,” the Halifax Examiner reported on June 28. “The Pilotage Authority says the aircraft carrier will be parked at Anchorage #1, which is just north of McNab’s Island, but I’ve also been told that the ship will be anchored south of the island, near [Canadian Forces Base] Shearwater, so we’ll see, I guess. The other ships will berth at the Dockyard,” the reporter wrote.

This is how the Trudeau Liberals outrageously celebrated the 150th anniversary of Confederation – with the militarization of Canada’s ports, the promotion of “interoperability” with the U.S. war fleet by the Canadian Forces, out-of-sight war exercises held offshore, an attack by thugs on a Mi’kmaq ceremony at the statue of the genocidaire Edward Cornwallis, and an invitation-only reception for the ruling elite of Nova Scotia hosted by the U.S. Consul held onboard the carrier in the harbour hailing the U.S. Fourth of July a week later.

END_OF_DOCUMENT_TOKEN_TO_BE_REPLACED

Canada 150: The media’s obscene heroization of special ops and the ‘longest kill shot’

The Canadian Forces who only “advise and assist” = arm, aim, assassinate, annihilate.

At the same time Trudeau and the monopoly media are “celebrating” killing people at distances of over three kilometres, the Trudeau Liberals blatantly deny that we are even involved in combat operations. “One wonders what effect that has upon soldiers simultaneously being asked to kill people and then being told that what they are actually doing is ‘advising and assisting’.” | EL JONES*

Canadian media has been celebrating the world record for “longest kill shot” reportedly earned by a Canadian sniper in Iraq:

A Canadian sniper working alongside Iraqi forces in their fight against ISIS successfully struck a member of the militant group from a distance of 3,540 metres, Canada’s military confirmed Thursday.

The sniper is a member of the elite Joint Task Force 2 special forces unit, but citing operation security the military provided no details about how or when the incident took place.

The shot surpasses the previous record held by a British soldier, who in 2009 shot a Taliban fighter in Afghanistan from a distance of 2,475 metres. END_OF_DOCUMENT_TOKEN_TO_BE_REPLACED