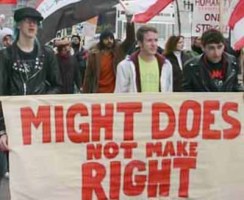 The following item illustrates the aim behind inciting passions and fuelling tensions: to enact more legislation that is self-serving and destroys the standards and due process established by a civil society based on the Rule of Law, as the British government is planning to do. On the contrary, what needs to be done is to go into the heart of the matter and appeal to all people to draw warranted conclusions and unite on that basis. The issue is to focus on what will resolve the crisis in favour of the people and what will not. The outlook that upholds Might Makes Right and enacts legislation on a self-serving basis will not permit any problem to be sorted out.

(Nov. 12) – Theresa May, the Home Secretary in David Cameron’s government … wants to introduce “extremism disruption orders”, which, yes, are as terrifyingly authoritarian as they sound.

Last month, May unveiled her ambition “eliminate extremism in all its forms.” Whether you’re a neo-Nazi or an Islamist, or just someone who says things which betray, in May’s words, a lack of “respect for the rule of law” and “respect for minorities”, then you could be served with an extremism disruption order (EDO).

Strikingly, EDOs will target even individuals who do not espouse or promote violence, which is already a crime in the U.K. As May says, “The problem that we have had is this distinction of saying we will only go after you if you are an extremist that directly supports violence. [This] has left the field open for extremists who know how not to step over the line.” How telling that a leading British politician should be snotty about “this distinction” between speech and violence, between words and actions, which isn”t actually some glitch in the legal system, as she seems to think, but rather is the foundation stone on which every free, democratic society ought to be built.

Once served with an EDO, you will be banned from publishing on the Internet, speaking in a public forum, or appearing on TV. To say something online, including just tweeting or posting on Facebook, you will need the permission of the police. There will be a “requirement to submit to the police in advance any proposed publication on the web, social media or print.” That is, you will effectively need a licence from the state to speak, to publish, even to tweet, just as writers and poets did in the 1600s before the licensing of the press was swept away and modern, enlightened Britain was born (or so we thought).