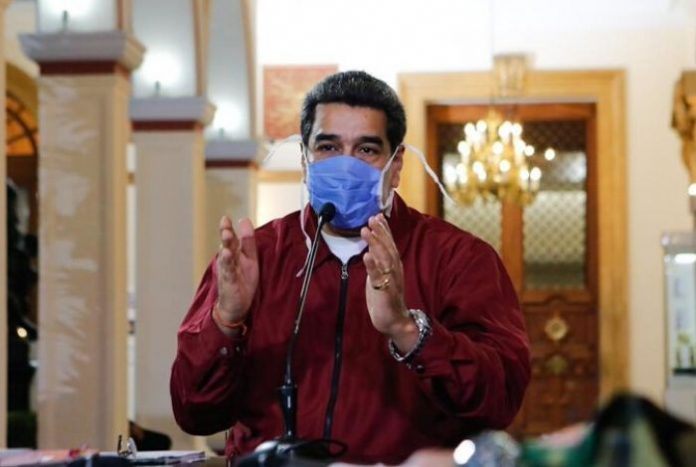 The request is an about-face for Maduro, who for years refused to share economic data with the Washington-based lender and just last month condemned it as a tool of US imperialism. In the past he has called the IMF a blood-sucking “assassin” responsible for plunging millions of people into poverty across Latin America.

The request was not much of an “about-face” for Venezuela’s President Nicolás Maduro, because it was the same type of disaster relief loan the International Monetary Fund (IMF) gave to Ecuador in 2016 under former President Rafael Correa, another blunt IMF critic, after a massive earthquake. The loan was not one of the IMF’s infamous “structural adjustment loans” that impose a menu of right-wing economic policies such as tax cuts for the rich, privatization of state assets and public sector lay-offs. 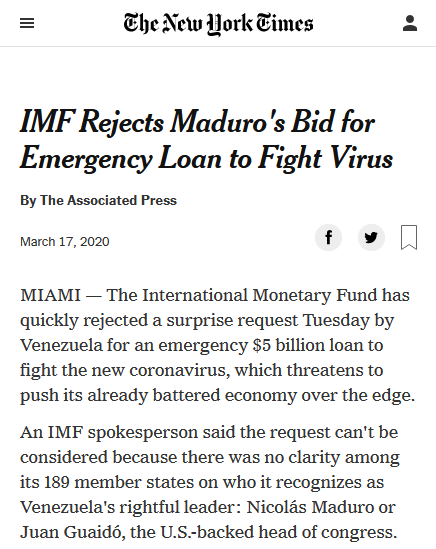 AP (New York Times, 3/17/20) accepts the IMF’s excuse that lack of “clarity” over Venezuela’s “rightful leader” prevents it from giving the country coronavirus aid–even though in 2002, the IMF rapidly offered aid to a short-lived coup government.

The IMF’s rejection of the $5 billion emergency loan for Venezuela is, all by itself, justification for Maduro’s “assassin” and “tool of US imperialism” charges against the fund.

The IMF said that it refused the loan because “there is no clarity” on whether the “international community” recognizes Maduro’s government. This legalistic excuse is reprehensible, because Maduro’s government is in power and is therefore the only entity positioned to actually respond to the pandemic with life-saving action. But there are two other huge problems with the excuse, neither of which were mentioned by the AP.

First of all, contrary to what the IMF claims, there is tremendous clarity that the “international community” recognizes Maduro’s government. Five months ago, the United Nations General Assembly voted Maduro’s government onto the Human Rights Council with 105 votes. That’s about double the number of countries that go along with the US in refusing to recognize Maduro (“more than 50,” according to the AP article). As Reuters (10/17/20) reported at the time of the General Assembly vote, Venezuela won the seat despite “fierce lobbying” against it by Washington. The AP and other western outlets routinely report the number of countries that do not recognize Maduro’s government (i.e., that go along with Trump), but never that the majority of UN member states clearly do recognize Maduro–and even accord it the status of a seat on an influential international body.

Another big problem with the IMF’s excuse for rejecting the loan was that in 2002, when Venezuelan President Hugo Chávez was briefly ousted in a US-backed military coup, the IMF rushed forward to offer loans to the coup-installed dictatorship. The dictatorship led by business leader Pedro Carmona was recognized by almost no other country in the world except the US. Carmona was only in power for two days, but the IMF managed to get out a statement saying that it was “ready to assist the new administration in whatever manner they find suitable.” The IMF spokesperson who said that, Thomas Dawson, is also a former US State and Treasury Department official. In fact, even the AP article about the IMF’s rejection of Maduro’s request says that the US is its “biggest shareholder and has a veto over major decisions.” 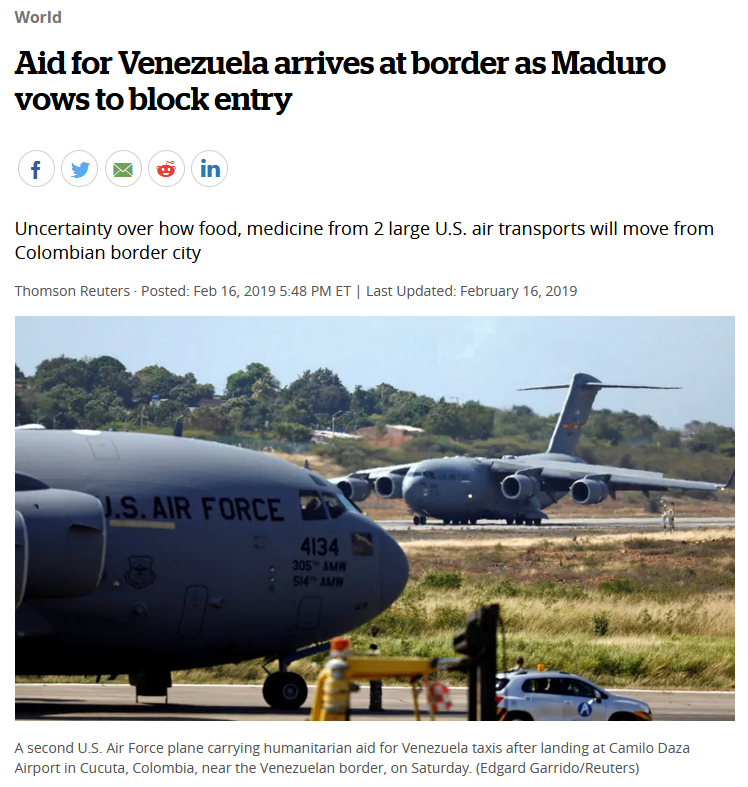 While the request for aid was not a big “about-face” for the Maduro government, the refusal was a dramatic change from the Mafioso-like “take our aid or else” stance the US government took towards Venezuela only a year ago (FAIR.org, 2/9/19). On February 23, 2019, Washington attempted to smash “humanitarian aid” into Venezuela through its border with Colombia.  At the time, Reuters, like many Western outlets, produced headlines like “US Looking for Ways to Get Aid Into Venezuela: Envoy” (2/14/19), “Venezuela’s Maduro Starts Shutting Borders to Block Humanitarian Aid” (2/21/19) and “After Venezuelan Troops Block Aid, Maduro Faces ‘Diplomatic Siege’” (2/24/19). A CBC headline (2/16/19) to a Reuters report read, “Aid for Venezuela Arrives at Border as Maduro Vows to Block Entry.”

Washington’s aim was to use this aid stunt to overthrow Maduro. The hope was that Venezuela’s military would defy Maduro’s order to stop the “aid” delivery, or that some act of violence at the border would incite a rebellion. Top US officials at the time made absolutely no secret of their aims. One of Trump’s top advisers, the now-fired John Bolton, tweeted:

Any actions by the Venezuelan military to condone or instigate violence against peaceful civilians at the Colombian and Brazilian borders will not be forgotten. Leaders still have time to make the right choice.

.@Ivanr_HD you should think very carefully about the actions you take over the next few days in #Venezuela. Because your actions will determine how you spend the rest of your life.

Do you really want to be more loyal to #Maduro than to your own family?

Four big lies were used to depict this coup attempt as a humanitarian aid mission, and Western outlets like Reuters and the Miami Herald sold all of them (FAIR 2/12/19):

All of this made clear that the US government’s concern was the opposite of what it claimed: It always wanted Venezuela’s humanitarian situation to get worse, not better. The IMF loan rejection as the deadly coronavirus spreads puts a few exclamations points on that fact. But don’t look for a flurry of Reuters headlines screeching that “Trump Blocks $5 Billion Emergency IMF Loan From Reaching Venezuela During Pandemic.” Reuters appears to have not even reported the loan rejection in English, as of March 24. One Reuters article (3/19/20) mentioned Venezuela’s request, but not that the IMF had already rejected it.

The Washington Post editorial board (3/20/20) scolded Maduro for asking the IMF for a loan that “he must have known would be turned down.” Yes, how terrible of Maduro to expose the boundless hypocrisy and cruelty of a foreign government that’s trying to overthrow him. The Post then pretended that Maduro is somehow forcing Trump to maintain “sanctions that are strangling Venezuela’s vital oil industry” by rejecting “compromise” with Guaidó. 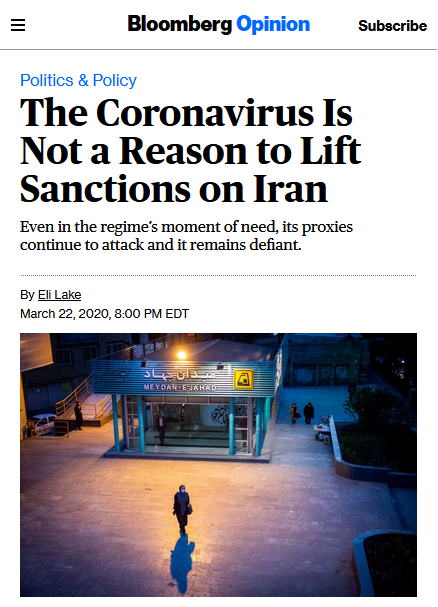 A global pandemic is no reason to cease destroying the economy of a nation that “remains defiant” | Bloomberg, 3/22/20.

Iran’s government has also requested an IMF emergency loan to fight the virus (Reuters, 3/12/20). No response yet from the fund as I write this, but the New York Times reported (3/21/20) that Trump officials had been debating whether to bomb Iran as it struggles with the virus and crippling US sanctions. That’s reason enough to applaud the Maduro government’s request to have the International Criminal Court (ICC) investigate the US government for crimes against humanity over its use of sanctions.

For now, the odds of success in bringing US officials to justice are very remote. US Secretary of State Pompeo has openly threatened to deny visas to the families of ICC judges if they try US soldiers over war crimes in Afghanistan. Apologists for the US in Western media have their work cut out for them, but history shows that they will descend to the task. Proving that Hell should exist, Eli Lake wrote a Bloomberg op-ed (3/22/20) headlined “The Coronavirus Is Not a Reason to Lift Sanctions on Iran.”

Also on this blog