US news falsely reports that North Korea threatened to nuke US 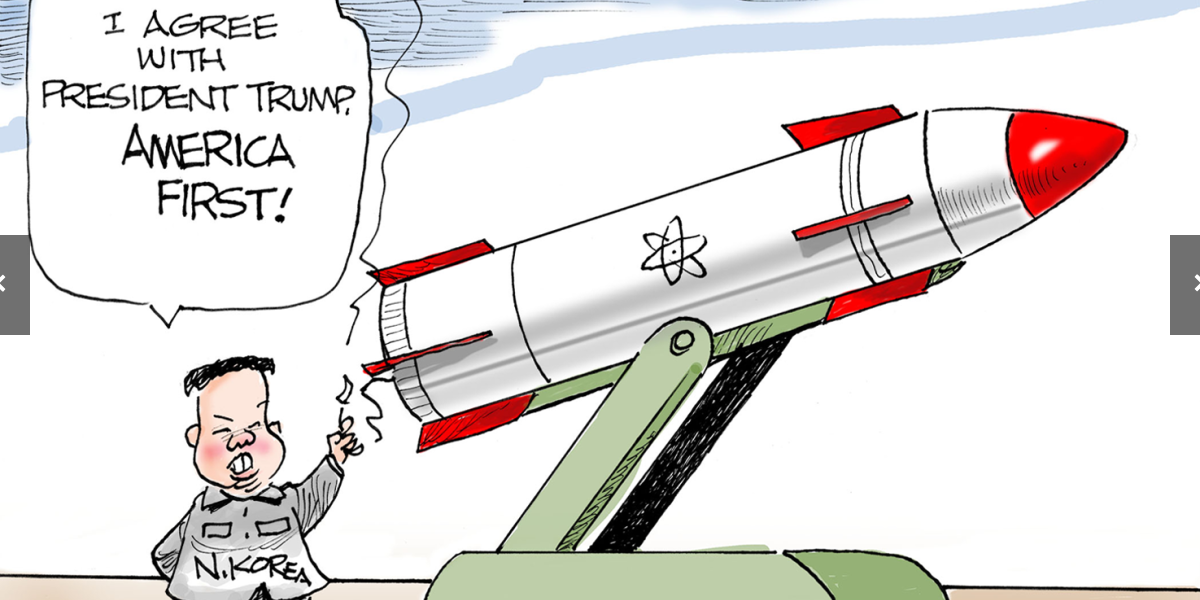 Bellicose cartoon featured by US News & World Report (6/26/20), by Dana Summers of the Tribune Content Agency, depicting North Korea launching a nuclear attack on the US.

In order to eliminate the nuclear threats from the US, the DPRK government has made all possible efforts, either through dialogue or in resort to the international law, but all ended in a vain effort…. The only option left was to counter nuke with nuke.

Does this statement made by the North Korean government sound like a threat to launch a nuclear strike on the US?

When one reads this brief snippet taken from a 5,500 word report carefully, it’s obvious that this is not a threat to launch a nuclear strike, but an explanation of the rationale behind North Korea’s nuclear weapons program. 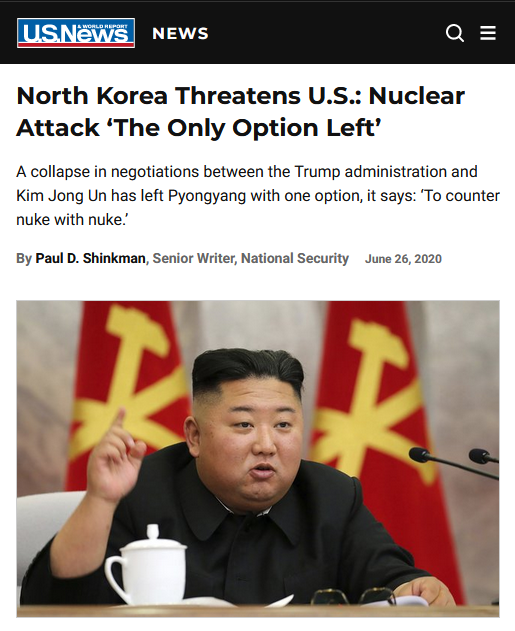 US News (6/26/20) willfully misunderstands a North Korean statement in the most alarmist way possible.

It’s hard to interpret “counter[ing] nuke with nuke” as a declaration of an intent to launch a nuclear strike, considering that the US hasn’t nuked North Korea yet—and because the country would not be around to launch such a response if the US had followed through on previous threats to nuke North Korea. The use of the past tense informs us that this is not an announcement of a future action, but of an action already taken by North Korea. Since we’re all still here, this means that North Korea has not decided to nuke us.

Yet, US News & World Report (6/26/20) presents this statement as a threat to launch an imminent nuclear strike on the US, running an alarmist report under the headline:

North Korea Threatens US: Nuclear Attack ‘the Only Option Left’

In case it isn’t clear that US News & World Report is misinforming readers with a ridiculous interpretation, the very next sentences in North Korea’s report should clarify that countering “nuke with nuke” means obtaining a nuclear deterrent:

In the long run, the US compelled us to possess nuke[s].

This brought to an end the nuclear imbalance in Northeast Asia, where only the DPRK has been left without nukes while all other countries have been equipped with nuclear weapons or nuclear umbrella.

Unlike the US, North Korea committed to a no-first-use pledge on May 7, 2016 (CounterPunch, 5/16/20). Had US News & World Report‘s Paul Shinkman included this crucial tidbit of North Korea promising to use nuclear weapons only for defensive purposes in its article, the added context would have made it especially clear that North Korea was not threatening a nuclear attack, and would have done a great deal to calm unnecessary fears and avoid unnecessary tensions. 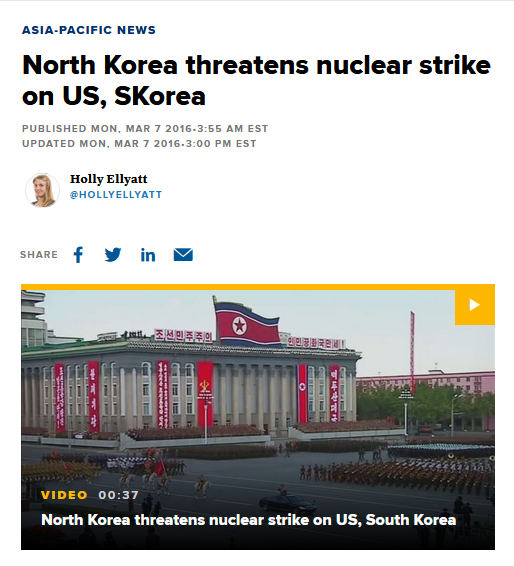 CNBC (3/7/16) originally used the headline “North Korea Threatens to Reduce US ‘to Ashes,'” but that might have been too absurd to effectively scare readers.

There have been other instances where characterizing North Korea’s statements as a “threat” were more justifiable, but even in those reports, adding more context would have been helpful in deciphering the intent behind North Korea’s ambiguous and bellicose statements.

For example, a few months before North Korea announced its no-first-use pledge, outlets like CNN (3/6/16), CNBC (3/7/16) and the New York Times (3/6/16) reported on a statement from the North Korean government containing exaggerated threats like launching an “all-out offensive,” an “indiscriminate nuclear strike,” as well as a “preemptive nuclear strike of justice,” and it being capable of reducing “all bases of provocation” to “seas in flames and ashes in a moment.”

These reports did add helpful qualifiers like North Korea seeing the annual joint war games held by the US and South Korea being a “precursor to invading its territory,” and North Korea’s inflated rhetoric being “typical around the time of annual military exercises,” as well as it being “unclear how close the country has come to acquiring the technologies required to build an intercontinental missile” capable of striking the US at the time. However, a more nuanced analysis of North Korea’s statement and situation at the time would have given stronger indications that North Korea’s statements were less of a spontaneous and imminent threat than these selective quotations imply.

For instance, the title of North Korea’s statement was “DPRK National Defense Commission Warns of Military Counteraction for Preemptive Attack,” which gives a strong hint that the statement is better understood as being a threat of retaliation against a nuclear first-strike by the US. The statement also references the “extremely adventurous OPLAN 5015,” which is a US Operations Plan for destroying North Korea through assassinations, attacking North Korea’s nuclear facilities and a preemptive nuclear strike, which lends further credence to the view that North Korea’s statement was an attempt to match the US’s rhetoric, rather than being a genuine (and incomprehensible) threat (National Interest, 3/11/17). The Peterson Institute for International Economics (3/6/16) also noted that the statement contained a “carefully calibrated statement that any such action would ultimately be defensive.”

Following the two points cited by corporate media suggesting that North Korea was considering preemptive action, the next point pivots back to a defensive posture:

If the enemies dare kick off even the slightest military action while vociferating about “beheading operation” aimed to remove the supreme headquarters of the DPRK and “bring down its social system,” its army and people will not miss the opportunity but realize the greatest desire of the Korean nation through a sacred war of justice for reunification.

The conditional statement above is a threat to retaliate against potential US and South Korean military efforts to enact regime change, not an unprompted threat to launch a preemptive nuclear strike. This complicates the one-sided caricature of North Koreans as bloodthirsty savages or mindless aliens acting out of irrational impulses to destroy the US.

This caricature also reverses reality, because unlike North Korea, the US has explicitly made it a strategy to project itself as an “irrational and vindictive” nuclear power with some “potentially ‘out of control’” elements in a 1995 STRATCOM report entitled The Essentials of Post-Cold War Deterrence.

US military and government officials who have dealt with North Korea noted that their leaders aren’t “crazy,” and that their foreign policy has consistently retained a tit-for-tat strategy for decades. If anything, North Korean diplomats have expressed bewilderment over the appearance of the US political establishment refusing to ask why North Koreans would ever launch nuclear weapons first, when North Koreans are as fully aware as anyone else that that would result in their country’s demise:

It would be suicidal to attack the USA first and especially with nuclear weapons. We understand that it would be the last day of our country.

Ultimately, whatever inflammatory rhetoric North Korean officials may or may not use in the face of perceived attacks on the country, journalists ought to reject racist notions from the Korean War of “the Oriental” thinking of “death as the beginning of life,” and regarding their own individual lives as “cheap,” and remind their audiences that North Korean government officials are no more suicidal than any other country’s leaders.