On Holocaust Remembrance Day, January 27, the day in 1945 that Soviet troops liberated prisoners from the Nazis’ Auschwitz prison camp, the peace- and justice-loving people of the world join all those whose families suffered so greatly under the Holocaust, a program of systematic state-sponsored murder by the Hitlerite Nazis and their allies, the Italian fascists and Japanese militarists.

The word “Holocaust” must be understood in its broadest sense as referring to the mass murder of all those who were persecuted, imprisoned, tortured and murdered by the Nazis in Germany and the countries it occupied, especially the Jews and others targeted for extinction including the Roma and many Slavs as well as political opponents, particularly communists and resistance fighters. So too the Japanese militarists carried out the Nanjing Massacre and many other atrocities in China and throughout Southeast Asia, while to this day they owe reparations to the Koreans for the crimes committed against them.

The Western powers initially colluded with Nazi Germany with the hopes that it would wipe out the Soviet Union. U.S. monopolies such as General Motors, Ford, and ITT built military equipment for the Nazis. Standard Oil, Dupont, Alcoa, and General Electric made huge profits collaborating with the Nazis throughout the war. IBM helped the Nazis organize the systematic looting and subjugation of Poland.

After the war, the U.S. brought thousands of known Nazis to the U.S. For example, SS Sturmbannführer Dr. Werner von Braun, who was put in charge of the U.S. missile program, oversaw the Nazis’ Mittelwerk rocket factory, which used slave labour from Nazi concentration camps.

At the same time, the Western powers also wanted to crush Germany, because it threatened their economic and political interests. The German Nazis wanted to crush everyone, especially the Soviet Union and, as the war progressed, they hoped for Western assistance to do so. Thus revanchism, war and aggression were the order of the day, instead of all countries sorting out matters on the basis of opening society’s path to progress.

Memorial plaque to those killed by the Nazis in Auschwitz, put in place in 1948 and removed in 1989.

In opposing the murderous Hitlerites, a great and heroic role was played by the anti-fascist resistance, especially in the Soviet Union, and by the brave fighters for all the resistance movements in Germany and the occupied countries, as well as the liberating armies from all countries which fought the Hitlerites, the Italian fascists and Japanese militarists, including the British, Canadians and Americans. The living memory of many Jews from Eastern Europe of their direct experience with the Soviets in particular is very positive. Besides the undying gratitude of the world’s people for the sacrifices the Soviet Union made, such as at the Battle of Stalingrad and the Battle of Kursk, many Jews and others were provided asylum or were liberated by the Red Army, which they recall with utmost fondness and gratitude. At the same time, because of the influence of Cold War anti-communism and Zionism, some have the tendency to spout anti-communist cold war ideology against the former Soviet Union, or what to this day is called Stalinism to connote oppression and dictatorship. It is all done in a manner which is irrational and completely at odds with their actual experience. 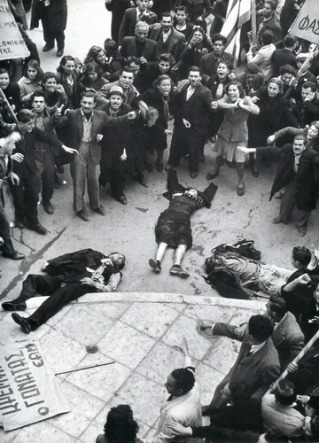 Protestors and the victims after British police open fire on the EAM patriotic demonstration in Athens, Greece, on December 3, 1944, six months before the war was over | Ellada 1944 by Dmitri Kessel

After the war the mantle of the Hitlerite atrocities was inherited by the Anglo-Americans who betrayed the cause for which the people of their own countries sacrificed their lives to liberate humankind from the scourge of fascism. First they created a civil war in Greece killing communist fighters and demanding that all resistance fighters disavow communism and the resistance struggle and espouse the regime of the fascist military junta imposed on them. Then they adopted the Cold War anti-communist ideology to criminalize communism and disorient the generations which suffered so much so that they blame some abstract human nature for the atrocities, instead of the system of economic and political power concentrated into the few hands of a financial elite which sought domination in order to solve its problems.

In the post-war period the crimes committed during the Second World War were systematically used by the Anglo-American powers to stop the peoples from moving forward in a manner which favours them and ensures such things are never repeated. Disinformation was spread on a massive scale so as to justify creating the state of Israel as a bastion of Anglo-American imperialism in the Middle East. This was done in a manner which was to create a permanent state of no-war-no-peace so as to deprive the Palestinian people of their homeland and right to self-determination and also suppress the striving of the peoples of the entire Middle East to empower themselves. This has led to prolonged suffering of a kind which itself represents the attempted genocide of a people. Today, attempts by those such as the Harper dictatorship to criminalize support for the Palestinian Resistance by declaring it is “anti-semitic,” is a contemptible attempt to manipulate the sympathy expressed worldwide for the suffering of the Jews, amongst others, during the Second World War.