On February 13, when reporting on television about the thwarted coup against the Bolivarian government of Venezuela, President of the National Assembly Diosdado Cabello referred to a Canadian link. President Nicolás Maduro has alleged that the failed coup was organized and financed by the United States government. END_OF_DOCUMENT_TOKEN_TO_BE_REPLACED

As in past coup attempts, the silence of the Canadian government is very telling. While the Harper government claims it opposes terrorism, this is totally unprincipled, as it has not said a word about the recent events in Venezuela. 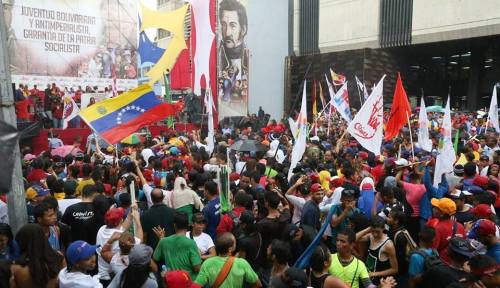 The Venezuelan government recently brought to light another failed coup attempt by opposition forces. This attempt to overthrow the democratically elected government of Venezuela is part of the U.S. imperialists’ plan to impose themselves on the peoples of Latin America and the Caribbean. The plot is said to involve members of the U.S. and UK diplomatic corps in Venezuela, while Canada has also been implicated in the plot through the alleged involvement of the Royal Canadian Mounted Police (RCMP). END_OF_DOCUMENT_TOKEN_TO_BE_REPLACED

Evidence presented on Venezuelan TV showed a video of the coup plotters, as well as the 10-year U.S. visa granted to one of the accused.

END_OF_DOCUMENT_TOKEN_TO_BE_REPLACED

(Feb. 5) – The Bolivarian government of Venezuela is currently under continual fire from the international and domestic right wing. These forces – divided but backed by the U.S. – are attempting to destabilize and overthrow the Bolivarian Revolution with plans ranging from the prolongation of a brutal economic war to smear campaigns against its leaders, through the worldwide media dissemination of misinformation. END_OF_DOCUMENT_TOKEN_TO_BE_REPLACED

Politics of assassination: Venezuela … Silence from the media 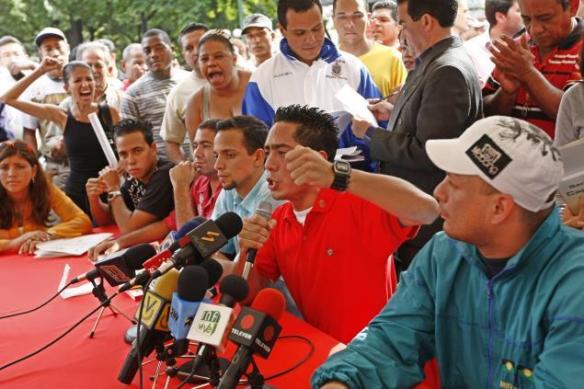 LAST FRIDAY, the centre of Caracas was filled with thousands of mourning citizens as they accompanied two flag draped coffins loaded with flowers they had cast upon it in homage.

If a Member of Parliament representing the Venezuelan opposition had been brutally tortured and stabbed to death in his own home, the Western press – including Canada’s – would have splashed the news in headlines around the world. END_OF_DOCUMENT_TOKEN_TO_BE_REPLACED

ON MAY 8, peaceful protestors were assaulted by supporters of Maria Corina Machado, a former opposition member of the National Assembly of the Bolivarian Republic of Venezuela, inside and outside of a scheduled talk at the University of Ottawa.

About 30 concerned Canadians had gathered to protest Machado’s visit to Ottawa to meet with representatives of Canadian Prime Minister Stephen Harper and Canadian big capital.

END_OF_DOCUMENT_TOKEN_TO_BE_REPLACED

Venezuela: Who is Leopoldo Lopez? 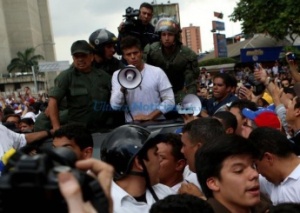 Far right leader Leopoldo Lopez, who participated in the failed 2002 coup against then President Hugo Chávez, addresses a crowd on Feb. 18 in Caracas

(Feb. 20) – IT IS HARD to argue that many of those involved in anti-government protests in Venezuela don’t have legitimate grievances — widespread insecurity and media repression cannot be ignored — or that the government’s charges against opposition leader Leopoldo Lopez, including “terrorism,” have been filed with sufficient substantiation.

But who is Lopez, and is there any evidence that his own methods are more democratic than those of the government he paints as corrupt and aims to topple through extra-constitutional means? END_OF_DOCUMENT_TOKEN_TO_BE_REPLACED

Venezuela beyond the protests: The revolution is here to stay

By EVA GOLINGER, Postcards from the Revolution 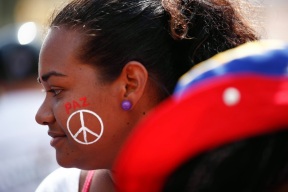 (Feb. 20) – FOR THOSE of you unfamiliar with Venezuelan issues, don’t let the title of this article fool you. The revolution referred to is not what most media outlets are showing taking place today in Caracas, with protestors calling for the ouster of Venezuelan President Nicolas Maduro. The revolution that is here to stay is the Bolivarian Revolution, which began in 1998 when Hugo Chávez was first elected president and has subsequently transformed the mega oil producing nation into a socially-focused, progressive country with a grassroots government. Demonstrations taking place over the past few days in Venezuela are attempts to undermine and destroy that transformation in order to return power to the hands of the elite who ruled the nation previously for over 40 years. END_OF_DOCUMENT_TOKEN_TO_BE_REPLACED