According to the spin of the NATO countries, the aim of the 2011 uprisings in much of the Middle East and North Africa – the so-called “Arab Spring” was to embrace “Western values.” Disinformation is spread that the aim of resistance is to bring about a liberal European nation-state like those formed in the 19th century on the basis of plunder and devastation.

In parallel, a similar Eurocentric and racist conceit permeates the counter-spin that the “Arab Spring” was the exclusive product of US subversion, as if U.S. imperialism and Zionism is so powerful that it monopolizes both subjective and objective factors; nay more for, according to the counter-spin, they are wholly accountable for the existence of Islamic fundamentalism, ISIS, Muslim Brotherhood, Hamas, al-Qaeda, Bin Laden, and so forth. The underlying premise of these dogmas is that the Arabic and African peoples have no history and experience of fighting oppression and are inferior peoples incapable of organizing without Western liberal tutelage.

The premise of both the spin and the counter-spin is to wreck public opinion with the disinformation that the peoples do not have their own history, intelligence and profound thought material, on the basis of which they can construct a real alternative, develop independent politics that advances their movement, and build nation-states that serve their own interests and well-being. In parallel, the rising of the Arabic and African peoples against imperialist domination and exploitation and their striving for progress and renewal is attributed to religious and ethnic factors, on the basis of which sectarian violence is organized by the secret agencies to smash the unity of the peoples and wreck public opinion. The premise and modus operandi of this disinformation is brilliantly discussed by Sandra Smith in Muslims and the Media on this website.

As Dr Bramhall* summarizes in her book review, the dirty role of US agencies and its creation of a 5th column in the “Arab Spring” was undeniable – as extensive as it was perfidious. It is fact, not opinion. Today, at a time when European nation-building projects are in profound crisis, the role of these agencies in spreading chaos and sectarian violence amongst the peoples fighting for liberation as well as sovereign countries such as Venezuela or Syria is causing disasters of unprecedented proportions, as the ensuing events of the past five years in the Middle East and North Africa demonstrates.

From Tahrir Square to Halifax and Ottawa: Implications for Canada

The significance cannot be lost on Canadians, who can correlate that the subversive agencies of the United States play a similar role within Canada to oppose a genuine nation-building project that will block the drive for annexation and aggressive war, and whose government is up to its neck in overt and covert subversion and aggression in the Middle East and North Africa.

Think about this: the Halifax International Security Forum (HISF), mainly funded by the Department of National Defence (DND), was formed in 2009 as a covert arm of the U.S. state, as demonstrated by fact: its headquarters is in Washington, DC. Its two leading officials, president David Van Praagh and vice-president Joseph Hall, both U.S. citizens and experienced agents whose salary is paid by the DND, were deployed to Egypt by the U.S. National Democratic Institute of the National Endowment for Democracy (NED) during the Tahrir Square uprising. The HISF website publicly crows that, “Mr. Hall opened the first NDI office in Cairo in 2005 and had the privilege to be in Cairo in January and February of 2011” (emphasis added). Directors of the HISF include three members of the Council of Foreign Relations (CFR) and the president of Freedom House. Sen John McCain, head of the International Republican Institute (IRI), delivers the lead speech every year.

Leading representatives of federal ministries of defence and foreign affairs, all major political parties, the think tanks and liberal foreign policy gurus participate in annual forums of the HISF. Prime Minister Justin Trudeau’s foreign policy adviser, Roland Paris, the former Founding Director of the Centre for International Policy Studies (CIPS) at the University of Ottawa, was a member of its “agenda working group” for two years. When the National Post calls Paris “the man behind Justin Trudeau’s foreign policy,” one can ask who is behind the man and who is setting Trudeau’s agenda! (A more complete and uptodate treatment of Paris’ views can be seen here.) In turn, along with overt military deployments abroad, the Canadian Dept. of Foreign Affairs (now Global Affairs) advances oodles of money in what it calls democracy-building back to U.S. state agencies such as NED and Freedom House – including one $6 million grant to IRI for Ukraine – to bring to power in oppressed nations those who will submit to foreign interests and impose their own concept of the colonial nation state.

Arabesque$: Enquête sur le rôle des États-Unis dans les révoltes arabes (Investigation into the US Role in the Arab Uprisings) is an update of Ahmed Bensaada’s 2011 book L’Arabesque Américaine. It concerns the US government role in instigating, funding and coordinating the Arab Spring “revolutions.” Obviously most of this history has been carefully suppressed by the western media. The new book devotes much more attention to the personalities leading the 2011 uprisings. Some openly admitted to receiving CIA funding. Others had no idea because it was deliberately concealed from them. A few (in Egypt and Syria) were officially charged with espionage. In Egypt, seven sought refuge in the US embassy in Cairo and had to be evacuated by the State Department.

According to Bensaada, the MENA Arab Spring revolutions have four unique features in common:

Bensaada begins by introducing non-violent guru Gene Sharp (see The CIA and Nonviolence), his links with the Pentagon and US intelligence, and his role, as director of the Albert Einstein Institution, in the “colour” revolutions.2 in Eastern Europe and the attempted coup against Hugo Chavez in 2002.)

The US goal in the Arab Spring revolutions was to replace unpopular despotic dictators, while taking care to maintain the autocratic US-friendly infrastructure that had brought them to power. All initially followed the nonviolent precepts Sharp outlines in his 1994 book From Dictatorship to Democracy. In Libya, Syria and Yemen, the US and their allies were clearly prepared to introduce paid mercenaries when their Sharpian “revolutions” failed to produce regime change. 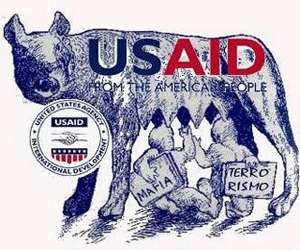 Relying mainly on Wikileaks cables and the websites of key CIA pass through foundations (which he reproduces in the appendix), Bensaada methodically lists every State Department conference and workshop the Arab Spring heroes attended, the dollar amounts spent on them by the State Department and key “democracy” promoting foundations3, the specific involvement of Google, Facebook, Twitter and Obama’s 2008 Internet campaign team in training Arab Spring cyperactivists in encryption technologies and social media skills, US embassy visits, and direct encounters with Hillary Clinton,  Condoleezza Rice, John McCain, Barack Obama and Serbian trainers from CANVAS (the CIA-backed organization that overthrew Slobodan Milosevic in 2000).

Bensaada focuses most heavily on the Tahrir Square uprising in Egypt. The Washington Post has estimated approximately 10,000 Egyptians took part in NED and USAID training in social media and nonviolent organizing techniques.

For me the most astonishing information in this chapter concerned the role of an Egyptian exile (a former Egyptian policeman named Omar Afifi Suleiman) in coordinating the Tahrir Square protests from his office in Washington DC. According to Wikileaks, NED paid Suleiman a yearly stipend of $200,000+ between 2008-2011.

Sen John McCain, head of the International Republican Institute, and Libyan terrorist military leader Abdel-Fattah Younis (R) of the Transitional National Council tour their headquarters in the city of Benghazi on April 22, 2011. McCain praised Libyan terrorists as his “heroes” in a visit to their de facto capital, one day after the US started flying armed Predator drones to bolster NATO firepower and try to break a battlefield stalemate with Libyan forces. The overthrow of that country’s government by NATO including Canada and the feudal Gulf Arab powers has now led to a collapse in human rights and social conditions. Libya became a principal conduit of sending arms and recruits through Turkey to Syria to carry out US regime change in that country | UPI\Tarek Alhuony

In the section on Libya, Bensaada zeroes in on eleven key US assets who engineered the overthrow of Gaddafi. Some participated in the same State Department trainings as the Middle East opposition activists and instigated nonviolent Facebook and Twitter protests to coincide with the 2011 uprisings in Tunisian and Egypt. Others, in exile, underwent guerrilla training sponsored by the CIA, Mossad, Chad and Saudi Arabia. A few months after Gaddafi’s assassination, some of these same militants would lead Islamic militias attempting to overthrow Assad in Syria.

Between 2005 and 2010, the State Department funneled $12 million to opposition groups opposed to Assad. The US also financed Syrian exiles in Britain to start an anti-government cable TV channel they beamed into Syria.

In the section on Syria, Bensaada focuses on a handful of Syrian opposition activists who received free US training in cyberactivism and nonviolent resistance beginning in 2006. One, Ausama Monajed, is featured in the 2011 film How to Start a Revolution about a visit with Gene Sharp in 2006. Monajed and others worked closely with the US embassy, funded by the Middle East Partnership Initiative (MEPI). This is a State Department program that operates in countries (such as Libya and Syria) where USAID is banned.

In February 2011, these groups posted a call on Twitter and Facebook for a Day of Rage. Nothing happened. When Sharpian techniques failed to produce a sizable nonviolent uprising, as in Libya, they and their allies (Saudi Arabia, Turkey, Qatar and Jordan) were all set up to introduce Islamic mercenaries (many directly from Libya) to declare war on the Assad regime.

1.I was astonished to learn that Forum Fikra, a forum for Arab activists working against authoritarian governments, was mainly funded by the Nathan and Esther K Wagner Family Foundation. The latter also funds numerous pro-Israel groups and projects, as well as the Washington Institute for Near East policy (a pro-Israel group with close ties to AIPAC). [↩]

3.Democracy promoting foundations (as used here, “democracy” is synonymous with capitalism, i.e., favourable to the interests of US investors). Here are seven of the main ones involved in funding and training Arab Spring activists:

*Dr. Bramhall is a retired American psychiatrist and political refugee in New Zealand. She has published a free, downloadable non-fiction ebook 21st Century Revolution. Her first book The Most Revolutionary Act: Memoir of an American Refugee describes the circumstances that led her to leave the US in 2002. Read other articles by Stuart Jeanne, or visit her website.

This article was posted on Dissident Voice, October 25th, 2015

One response to “The Arab Spring: US black ops and subversion”